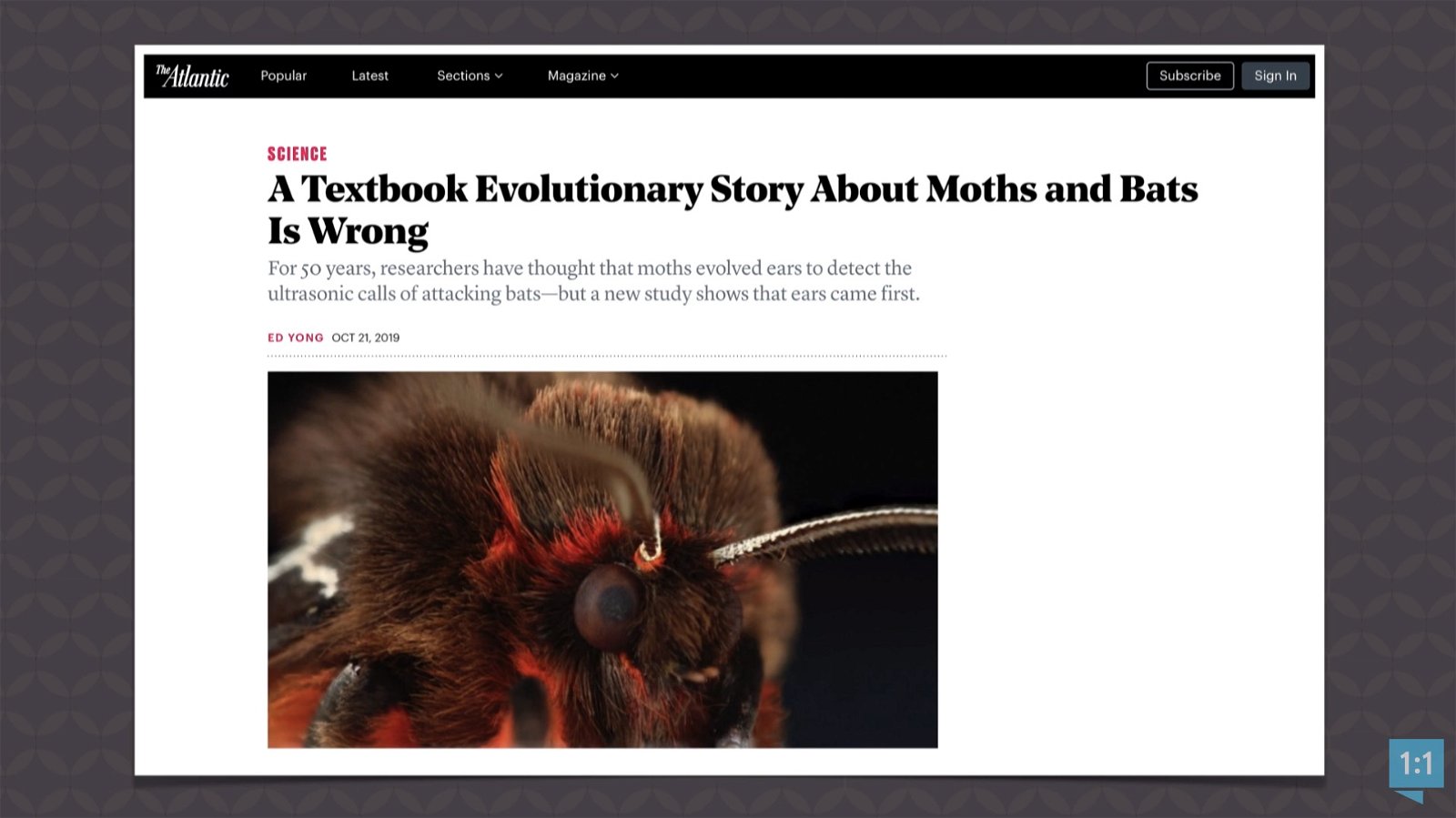 Which evolved first—moth ears or bat echolocation? Well, the “textbook” evolutionary story is that bats evolved the ability to make ultrasonic calls, which they used to hunt for moths. And then moths supposedly evolved (several times, apparently) the ability to hear these calls and better evade the hunting mammals. Now, that story has been taught as fact for years. But apparently, a new study says this whole story is backwards!

Based on this new study (it assumed evolutionary ideas and relationships in the first place), which was described as a “bit of a bombshell,” evolutionary scientists claim moth ears evolved first, predating bat echolocation by 28 million years. Why did they evolve these ears? Well, they don’t know—but they do know that it wasn’t to evade bats. As one researcher involved in the study shared, “Most of the introductions I’ve written in my papers are wrong.” The evolutionary story is being rewritten once again! (Just as an aside here—God’s Word has remained the same; it doesn’t change. Man’s fallible word, though, changes all the time.)

The idea that something as complex as echolocation, and ears on both bats and moths that can hear these calls, evolved by random, chance processes is ridiculous anyway. As the researchers stated in the article, these special moth ears didn’t evolve just once in their story—they evolved “repeatedly” . . . a total of nine times. And echolocation itself is said to have evolved four times throughout the mammal world. The lengths evolutionists will go to so they can avoid the obvious (i.e., God created) is amazing!

It’s no big shock that the evolutionary story is being turned on its head yet again—it happens all the time!

It’s no big shock that the evolutionary story is being turned on its head yet again—it happens all the time! Now, some evolutionists say that’s just because this is how science works, as newer research overturns older ideas. But, when it comes to evolution, it is so elastic that it doesn’t matter what researchers discover, they just change the story to match with the new narrative. The evolutionary predictions and beliefs are constantly wrong, and yet evolutionists won’t throw the model out—they just adapt it to match whatever new evidence they’ve found. It’s not science—it’s just storytelling. Evolution is a fairy tale.

Moth ears didn’t evolve, and neither did bat echolocation. Both moths and bats were created on day five of creation week. God’s fingerprint is seen in both of these creatures, as Romans 1 says,

For the wrath of God is revealed from heaven against all ungodliness and unrighteousness of men, who by their unrighteousness suppress the truth. For what can be known about God is plain to them, because God has shown it to them. For his invisible attributes, namely, his eternal power and divine nature, have been clearly perceived, ever since the creation of the world, in the things that have been made. So they are without excuse (Romans 1:18–20).

This item was discussed on Monday on Answers News with cohosts Avery Foley, Dr. Gabriela Haynes, and Bodie Hodge. Answers News is our weekly news program filmed live before a studio audience here at the Creation Museum and broadcast on my Facebook page and the Answers in Genesis Facebook page. We also covered the following topics:

Watch the entire episode of Answers News for October 28, 2019.