A New Reformation for a Post-Truth Church

On this day in 1517—exactly 500 years ago—the church and culture were changed forever when a defiant monk nailed his 95 Theses to the door of Castle Church in Wittenberg, Germany. This act by Martin Luther is considered the beginning of the Protestant Reformation, a period that would radically reform the church as she returned to God’s Word, not man’s tradition, as the authority for life and practice.

A World Primed for Reform

Much has changed over the five centuries since Luther’s bold stance on God’s Word. But the world of Luther is one that parallels our own in some ways. The late 15th and 16th centuries were characterized by massive changes: the invention of Gutenberg’s printing press enabled the printed word to travel in a way it never could before; the Black Plague had decimated the population; new lands were being discovered; science was advancing by leaps and bounds; and the church and government were filled with greed, corruption, and political alliances between kings and popes.

This world eerily parallels our own. We live in a time of change; the internet has quickly shrunk the world, allowing information to spread more easily than ever; apocalyptic threats of catastrophic climate change, disease and antibiotic resistance, terrorism, natural disasters, nuclear war, and more threaten us; new worlds (exoplanets) are being discovered; science is still advancing and changing the way we think about things; and some churches and governments are still greedy and corrupt, serving their own interests.

The world of Luther in 1517 was primed for reform. People were restless and tired of the corruption that abounded, particularly in the church. So God raised up individuals, such as Luther and many others, to boldly stand on the truth of God’s Word and call the church to action. They stood against corruption and many unbiblical teachings, encouraging Christians to trust in Christ alone for salvation and God’s Word alone as the source of truth. People responded, and the Reformation was born.

Truth in a Post-Truth World

It’s fashionable in our time to reject the idea of absolute truth; rather we indulge in the “what’s true for me might not be true for you” strain of thinking. It’s reached the point where, at the end of 2016, Oxford Dictionaries chose post-truth as their word of the year. Post-truth is defined as

Relating to or denoting circumstances in which objective facts are less influential in shaping public opinion than appeals to emotion and personal belief.

In a post-truth world, truth is irrelevant. What matters is what’s true for us—our opinions, emotions, and beliefs.

Sadly, this kind of thinking isn’t limited to those outside the church. Just as many Christians in Luther’s time had unbiblical mindsets about various things, so do many Christians today. Some believers—and polls show that this is particularly true among the millennial generation—base their thinking, theology, doctrine, and morality on man’s opinions, not on the foundation of God’s Word. Take, for example, what research from America’s Research Group revealed about what the millennials in our churches believe, as reported in Ready to Return, coauthored by Ken Ham:

For these Christians, God’s Word is no longer the ultimate source of truth. In the answers these young people gave, you can easily see the culture’s thinking that man determines what’s right and what’s wrong. They’ve been so influenced by the thinking of our day that they’ve given up a biblical starting point and are thinking like the world—essentially, they are following man’s traditions rather than God’s Word, just as Christians were doing during Luther’s day. 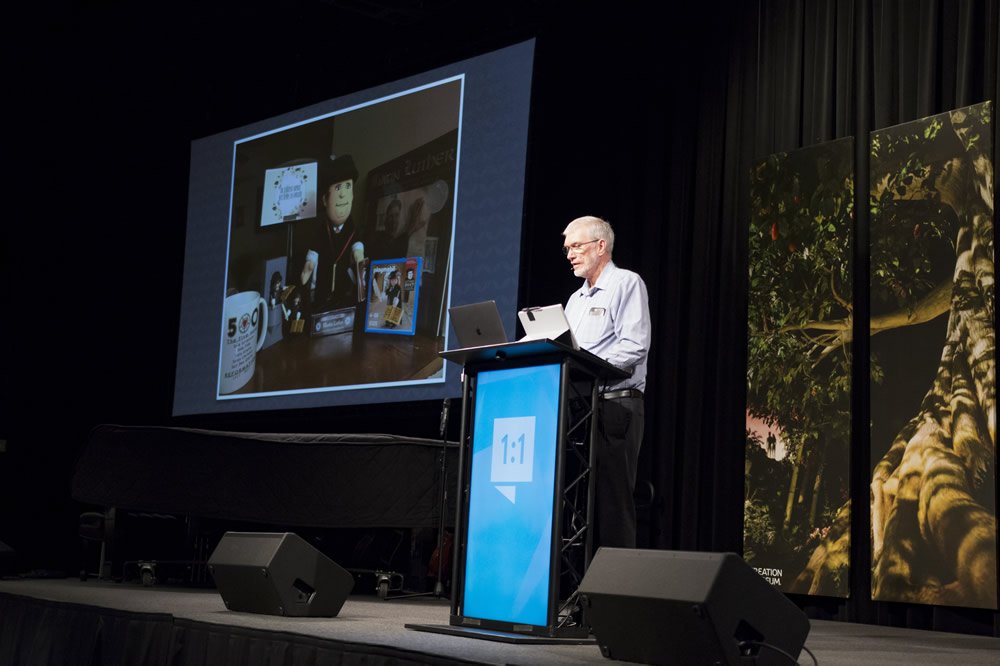 AiG President Ken Ham speaking to the staff this morning about the anniversary of the Reformation.

Calling the Church to a New Reformation

It’s time for a new reformation. We need to symbolically nail our theses to church doors and call the church back to her foundation—the Word of God. Notice the contrast between God’s Word and the temporary things of this world, including man’s traditions and opinions, in the following verses:

See to it that no one takes you captive by philosophy and empty deceit, according to human tradition, according to the elemental spirits of the world, and not according to Christ. (Colossians 2:8)

You leave the commandment of God and hold to the tradition of men. (Mark 7:8)

All Scripture is breathed out by God and profitable for teaching, for reproof, for correction, and for training in righteousness. (2 Timothy 3:16)

So that we may no longer be children, tossed to and fro by the waves and carried about by every wind of doctrine, by human cunning, by craftiness in deceitful schemes. Rather, speaking the truth in love. (Ephesians 4:14–15)

God’s Word is the only sure foundation and source of truth for in Christ “are hidden all the treasures of wisdom and knowledge” (Colossians 2:3) and the Bible is God’s revelation to us about Christ, “the Word” (John 1:1). Our thinking should reflect Christ and his Word, not the ever-shifting thinking of this world that is fashionable one day and thrown out the next.

Until we plant our feet firmly on God’s Word and say “here I stand,” we will always be blown about by the thinking of our culture, popular preachers, or our peers.

The Bible must be the starting point for our thinking in all areas.

Answers in Genesis has worked for nearly a quarter of a century to encourage and challenge the church to think biblically. We’ve shown that the Bible must be the starting point for our thinking in all areas, and we’ve equipped the church with answers for our secular culture. Our prayer is to see the church joyfully submit to the gospel and the authority of God’s Word, refusing to compromise with human traditions and man’s ideas.

May the church of our day be willing to stand publicly and boldly on God’s Word and, like Martin Luther, declare,

I am bound by the Scriptures I have quoted. My conscience is captive to the Word of God. I cannot and I will not retract anything, since it is neither safe nor right to go against conscience. May God help me, Amen.