What do you believe?

For 17% of the US population, the answer to that question is “nothing in particular.” This secular group, often referred to as the “nones,” is now larger than ever. Just 10 years ago, only 12% of the population claimed to believe “nothing in particular,” but that number has climbed to nearly one in five, according to a new analysis from the Pew Research Center.

This analysis also revealed that the number of self-identified Christians continues to dip. Only 65% of Americans claim to be Christian, down from 77% just a decade earlier. These numbers are particularly stark among younger people. Only 49% of Millennials claim Christianity as their religion, compared to 84% of the Silent Generation (those born 1925–1945), 76% of Baby Boomers (born 1946–1964), and 67% of Gen Xers (born 1965–1980).

But the news isn’t all bad. When the parameters of the study focused on only Americans who identify as born-again or evangelical Protestants, the number is as high or higher than it was in 2009.

This suggests that cultural Christianity is on the decline. Fewer people have grown up in church and fewer identify as Christians, choosing instead to wear the label of “none.” But the percentage of those who believe the gospel and consider themselves born again is remaining steady or even rising. In a country overtaken by secularism, we should be encouraged that God is still building his church, just as he has throughout history.

As cultural Christianity declines, fewer people have a shared knowledge of God as Creator, his Word as truth, and Jesus as Savior. Instead, their religious foundation is “nothing in particular”—which is just a self-pleasing assortment of beliefs from various world religions, including secularism and humanism, which are both based on evolutionary philosophy.

To share the gospel with the “nones,” we must lay the foundation of the one true God, our Creator, who has revealed himself and the method and timetable of his creation in his infallible Word. And in that Word, we find the absolute truth of the gospel.

No matter what beliefs fluctuate in our culture, the gospel remains unchanged. It is the message that began in Genesis 3:15, was preached in the book of Acts, and is still “the power of God for salvation” (Romans 1:16). 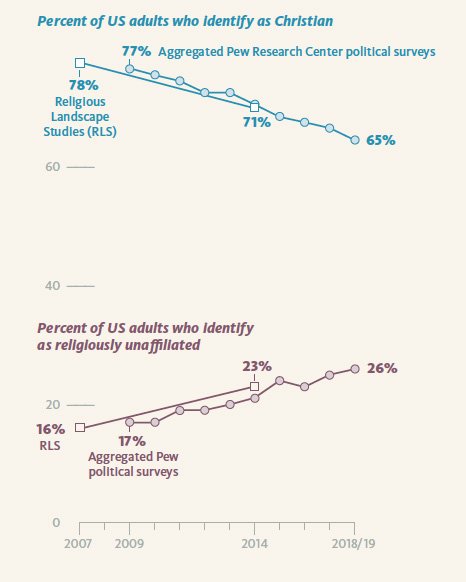 Avery Foley is a writer and speaker with Answers in Genesis. She also cohosts Answers News, a weekly live commentary on culture and science news. She holds a bachelor’s degree in religion from Liberty University and a master’s degree in theological studies from Liberty Baptist Theological Seminary.
Previous Article Life Unplanned: Our Interview with Abby Johnson