In this first part of my monthly letter, I’m opening up to you with some of my personal struggles. The second part deals with some heavy issues to remind us of the raging spiritual battle we are in.

First of all, “thank you, thank you, thank you.” We praise the Lord for all of you and give thanks to our Heavenly Father for using you to help preserve this ministry for future generations. We have received so many letters and emails, as well as financial support, from our AiG family encouraging us. I’ve included just one example for you. 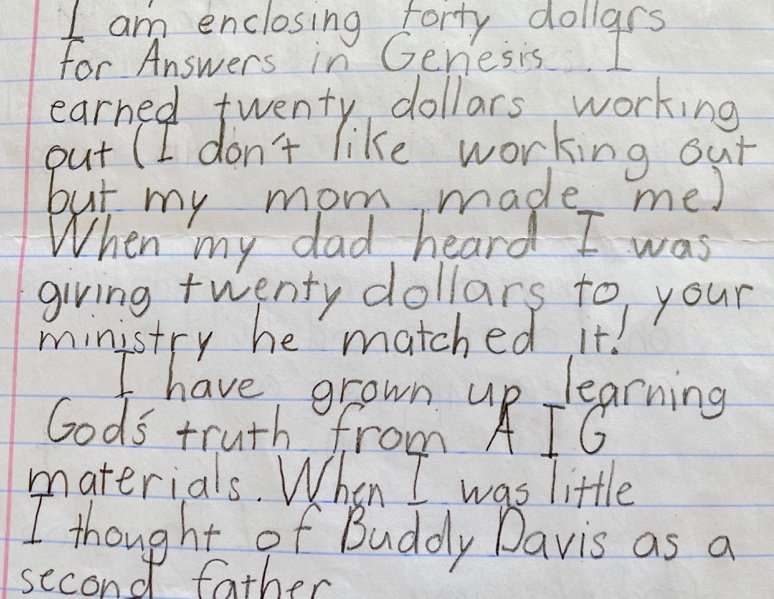 I’m sure for many varied reasons we are all stressed over the coronavirus situation. As you know, we had to temporarily lay off about 80% of our staff (who so want to come back to where the Lord has called them to minister), and others have been working extra hard (wearing many more hats than they used to) on reduced salary or donating their pay back to help keep the ministry going. I just can’t fully express my thankfulness to this dedicated crew. Even with such a skeleton crew, we have impacted an enormous number of people through all our live streams, websites, radio programs, media interviews, and resources.

And I’m sure you already know that a supporter enabled us to have our very own streaming platform, Answers.tv. Actually, when you think about it, the Lord enabled us to obtain what we thought was out of reach—all because of this COVID-19 situation. Our own streaming platform! How amazing is this? Now that’s something positive that has happened as a result of what, to us, seems like such a negative turn of events.

The Lord is providing our needs on a daily basis.

Because of the catastrophic drop in income due to the temporary closure of the Ark Encounter and Creation Museum attractions, we let you, our supporters, know we needed help to preserve this ministry for the future. So many of you have sacrificially supported us financially to enable the ministry to continue operating. It’s been rough, but the Lord is providing our needs on a daily basis.

And now that we are open, the restrictions are considerable and we will most likely not be seeing most of the bus tour groups this year that bring tens of thousands of people to the attractions. And as we head into the very slow winter months (January, February, and into March), we know this is going to be hard for us.

I must admit, I’m only human, and I have to keep reminding myself that God is in total control. I know he is, but it is hard going through this stressful situation. Every time I went to the empty Ark Encounter and empty Creation Museum, my heart cried out to the Lord to allow us to once again impact people through these facilities he entrusted to us for the proclamation of the truth of God’s Word and the saving gospel.

I know God tells us, “For my thoughts are not your thoughts, neither are your ways my ways” (Isaiah 55:8). I said to someone recently, “God is not answering my prayers the way I want him to!” That’s because his thoughts and ways are so far above ours, and I need to be content that, in the end, all that is happening will be beyond what we could have ever imagined. I’m sure Joseph was discouraged when he was in jail, and yet God then took him to a mountain way above what he could have thought possible.

Well, enough for sharing some of my personal struggles with this issue. I do ask though that our AiG family continue to pray for us and support the Lord’s ministry of AiG in any way possible so we can get through this terrible valley we are still in, despite having opened on June 8. From a human perspective, it seems it could take a couple of years to get out of the valley. But, again, I need to remind myself of what Jesus said in Mark 10:27: “With man it is impossible, but not with God. For all things are possible with God.”

On a recent radio interview, the host mentioned that churches noticed increased interest in attendance and in Christianity after the 9/11 terrorist event in the USA, as people struggled with understanding life, death, meaning, and purpose. However, such increased attendance and interest was generally short-lived.

Now, pastors were telling him that because of the coronavirus shutdown situation, many churches were impacting more people through social media and other online programs than they ever have, and there was an increased interest in the Bible and the Christian faith. The radio host said there was an expectation that once church buildings were open to the public again, there would be an increase in attendance, just as happened post 9/11. He asked me what churches needed to do to keep that increased attendance from waning.

Well that’s an interesting question, and I’m sure we all have answers we would like to contribute. However, I do want to reiterate something we’ve been saying for years:

Our research and experience have concluded there has been a lack of teaching of creation and general Bible apologetics in churches. This has greatly contributed to the younger generations doubting and disbelieving God’s Word and leaving the church. Most churches don’t have an emphasis on teaching such apologetics to all ages which has greatly diminished the effectiveness of Christians impacting their own families and those around them.

If churches don’t stop compromising God’s Word and start giving solid Bible teaching and equipping generations to defend that faith against secular beliefs, I predict any increased attendance will be very short lived.

But sadly, even many conservative churches don’t teach much about Genesis because they say it’s “too controversial” for certain people in their congregations. Sometimes I wonder if some pastors are more worried about losing certain people than teaching what is needed!

My point is that if churches don’t stop compromising God’s Word and start giving solid Bible teaching and equipping generations to defend that faith against secular beliefs, I predict any increased attendance will be very short lived.

And even though it seems we hear nothing but coronavirus stories and statistics in the news, we need to be reminded of the spiritual war raging around us and the enormous threat to Christian freedom in the West. One of the things the coronavirus situation has shown me is how easy it is for one person (like a state governor, for instance) to close down church buildings overnight! And we’ve seen blatant discrimination by certain leaders in the community to stop Christians from worshipping, for example, those who banned drive-in church (but, of course, churches continue to worship and impact people online).

Consider the following recent news stories and contemplate that while some happened outside the USA, they could easily happen here too:

Well, that’s just a small sample, but a reminder of the spiritual battle we are in and a reminder of how quickly Christian freedoms can be, and are being, lost.

At Answers in Genesis, even with reduced staff, we continue to do all we can to equip God’s people to contend for the faith, challenge non-Christians concerning the truth of God’s Word and the gospel, help families raise godly offspring to be salt and light to our world and the future generations, and challenge people to stand boldly for Christ and for the free exercise of Christianity in our nations.

And remember, this is your ministry! It’s because of your prayers and support that we stand strong in this battle.

And remember, this is your ministry! It’s because of your prayers and support that we stand strong in this battle. And whether we are facing a virus that temporarily closes our attractions or facing enormous threats to Christian freedom, God works through you to help us “be strong in the Lord and in the strength of his might.”

So, as you are able, please consider a generous gift to our core ministry this month. This will help us preserve this ministry for the future and bridge the gap caused by the temporary closure of the Ark Encounter and Creation Museum. And thanks to all of you who have already engaged in our digital content, purchased our materials, subscribed to Answers.tv, or provided a financial contribution.

Together, you’re helping us get through this. Thanks again for being part of our family.