Was There Really an Ice Age?

Glaciers, mammoths, and saber-toothed cats (sometimes called saber-toothed tigers)—those are just some of the things that immediately spring to mind when we think of the Ice Age. But some Christians wonder if there really was an Ice Age. Where does it fit in biblical history? Actually, it’s not biblical creationists who have a challenge explaining it. Secular scientists who propose dozens of ice ages throughout the past have some major hurdles to overcome!

You see, there are many lines of evidence that strongly suggest there was indeed an Ice Age in earth’s history. Now, what you need to form an ice age is much more than just a cold earth. Warm waters are required, so you have excess evaporation and cooler temperatures, especially summers, so this precipitation falls as snow and doesn’t melt. And the Flood of Noah’s day provides the key!

Intense volcanic and tectonic activity during the Flood would significantly warm the ocean waters. This would result in heavy evaporation. The volcanic activity would fill the atmosphere with ash and particles called dioxides, which would block sunlight, dropping the global temperature (we’ve observed this on a small scale with small volcanoes). This would lead to cooler temperatures and summers, allowing snow and ice to accumulate quite quickly without melting. Eventually the Ice Age peaked, and then declined, within several hundred years of the Flood.

The Flood, about 4,350 years ago, explains the Ice Age! Evolutionists don’t have a mechanism that would drive such an ice age, but creationists do!

This was just an overview of the topic, but, if you want to learn more, there’s a whole chapter dedicated to this question in A Flood of Evidence, the book I coauthored with my son-in-law Bodie Hodge. This popular book has answers to 40 of the most common questions we are asked about the Flood, its effects and after-effects, the Ark, the animals, and more. It’s a must-have for every creation library. I refer to it as the unofficial fifth book in The New Answers Book series.

In fact, if you’re looking to grow your library and learn more about the commonly asked questions people have about creation, evolution, the Flood, the Bible and more, you can get all four of The New Answers Books and A Flood of Evidence as a special pack.

Children can learn more about the Ice Age in the award-winning, live-action film, Ice Age. In this film, AiG speaker and songwriter Buddy Davis hikes on glaciers, kayaks among icebergs, and reveals remarkable facts about animals that lived during the Ice Age after Noah’s Flood. Full of music and entertaining animation, Ice Age is a part of the Buddy Davis’ Amazing Adventures series. In fact, Ice Age won an award last Saturday for Best Children’s Film at the Christian Worldview Film Festival in Nashville. 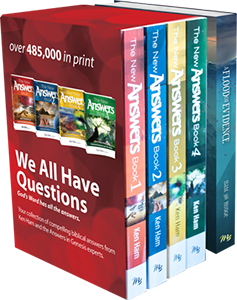 Get the ultimate collection of compelling biblical answers from Ken Ham and the AiG experts. 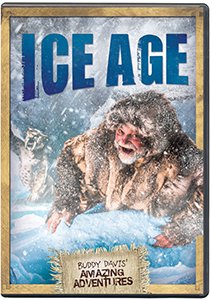 Join explorer Buddy Davis as he hikes atop glaciers, kayaks among icebergs, and reveals amazing facts about animals that lived during the Ice Age.

Learn more and order A Flood of Evidence and Ice Age today at AnswersBookstore.com.