Sharing the Creation Message in the Czech Republic, Romania, and Austria

Many of our Answers in Genesis speakers have taught the relevance of Genesis, biblical authority, and apologetics to believers in dozens of countries around the world. Recently Dr. Terry Mortenson, one of our authors and speakers, traveled to several countries in Europe to equip ministry leaders, students, and other believers with solid answers to the skeptical questions of our secular age as well as challenge unbelievers with the truth of God’s Word.

I thought I would share his thoughts from the trip with you.

I had been a missionary to Czechoslovakia back in the Communist days, 1980–1989, and had learned the language well enough to do my ministry but was by no means fluent. On the bus from the Vienna Airport to Brno (second largest city in the Czech Republic) on Monday evening, I examined the Czech slides for my lectures. I was pleasantly surprised that 25 years after not using the language, I could still read much of the Czech and even found a couple of mistakes. So it was fun to be in Czech Republic again. The country has greatly changed since those days of Communism, and my time here brought back lots of memories.

I met with the Brno staff and some of the students of Integrity Life (IL), a ministry to university students. The director and his wife (Josef and Danka) were the first people that we worked with back in the Communist period. They now have 25 staff serving in 5 cities and are having a great impact in this country very dominated by atheism. I taught their staff (from several cities) and spent several hours answering questions.

In the morning I taught the staff on “Creation vs Evolution: Does It matter?” They had never heard such arguments but were very hungry to learn. At the end of the lecture, I showed two slides with pictures of about 20 prominent American apologists and theologians who don’t think the age of the earth matters and either accept the millions of years or link arms in ministry with others who promote the acceptance of millions of years in the church. Sadly, there is almost no creationist literature available in the Czech language. I pray that God will raise up some people to translate some of our booklets.

In the IL office they have quite a good library of English Christian books and a smaller library of Czech Christian books. I saw that some of the books by those old-earth apologists and theologians (in English or Czech) are there. One girl on staff told me after the lecture that when she came to Christ a few years ago she had immediately believed Genesis. But as I spoke she realized that she had unknowingly slowly absorbed wrong ideas about Genesis from one of those American books. She was so grateful that I had opened her eyes to this fact. Several staff said that they hoped I would come back for a longer time to teach in the future.

In the evening meeting about 50 students and staff came, and about 10 were not believers. I lectured on why biological evolution is false and Genesis is true. At the end, surprisingly, only one person asked a question (about radiometric dating). No one else wanted to ask a question publically, so we officially closed the meeting. But then several students came to me to ask questions personally for about 45 minutes. At the meeting the organizers also had comment cards at the end, and one of the staff read them to me. Many said that the lecture had really helped them with information they had never heard before.

Later Josef took me to Prague. We had lunch with the IL director and his family, and I taught the staff on why this issue of origin matters. Again they were so appreciative and hungry. One woman said it really encouraged her faith.

One student said that it was a very important night for him, and he realized that he had believed some lies about origins. I had good interaction with a young man who is majoring in archaeology. He was adamant that carbon dating is absolutely reliable and proves that the Bible is wrong. I gave him some things to think about and challenged him to check out our web site because he has only heard one side of the issue. Say a prayer for Peter that he will explore things further.

I received an email from Gabi, a Romanian who translated my slides, about one man at the conference where I taught:

An older brother (Ilie) from the village of Perieti got saved a few years ago after 15 years of witnessing. . . . He was at the Conference, and after he got back he went house to house in his village to his neighbors to share and show them pictures. The most excited man!

However, his wife has been stubbornly rejecting, and is a person with a hardened heart. I believe our visit yesterday [to their home] was not just to record brother Ilie's testimony but to minister to her and tell her that today is the day of salvation. God's presence through His messengers and His Word that was shared was powerfully felt. No decision was made on the spot, but it is the work of the Holy Spirit, and we pray that she will respond soon.

Thank you so much for everything you have done for the Lord in Romania. The feedback continues to come strongly, positively, and we believe that the messages will have a large ripple effect.

She also said that my translator requested a copy of my English-language slides. That is a positive sign that perhaps he wants to investigate further.

Only about 30 came to the first meeting in Vienna. Of course that number was disappointing. But there were at least a few nonbelievers. The country (indeed the whole world) is so brainwashed with evolution that it is difficult, even with lots of advertising (as the church here has done) and personal invitations from Christians, to get nonbelievers to even consider that Genesis might be true (they proudly think they are open-minded and intellectual, not like those “crazy creationists” who in the words of Richard Dawkins are “ignorant, stupid, or insane”).

Large crowds came in the last few years to hear . . . William Lane Craig and John Lennox, but sadly they influenced many in the audience not to believe Genesis as literal history. So we press on by faith, trusting that God will use the truth in the lives of those who come.

My final days in Austria were filled with presentations; my final lecture was attended by about 75 people. 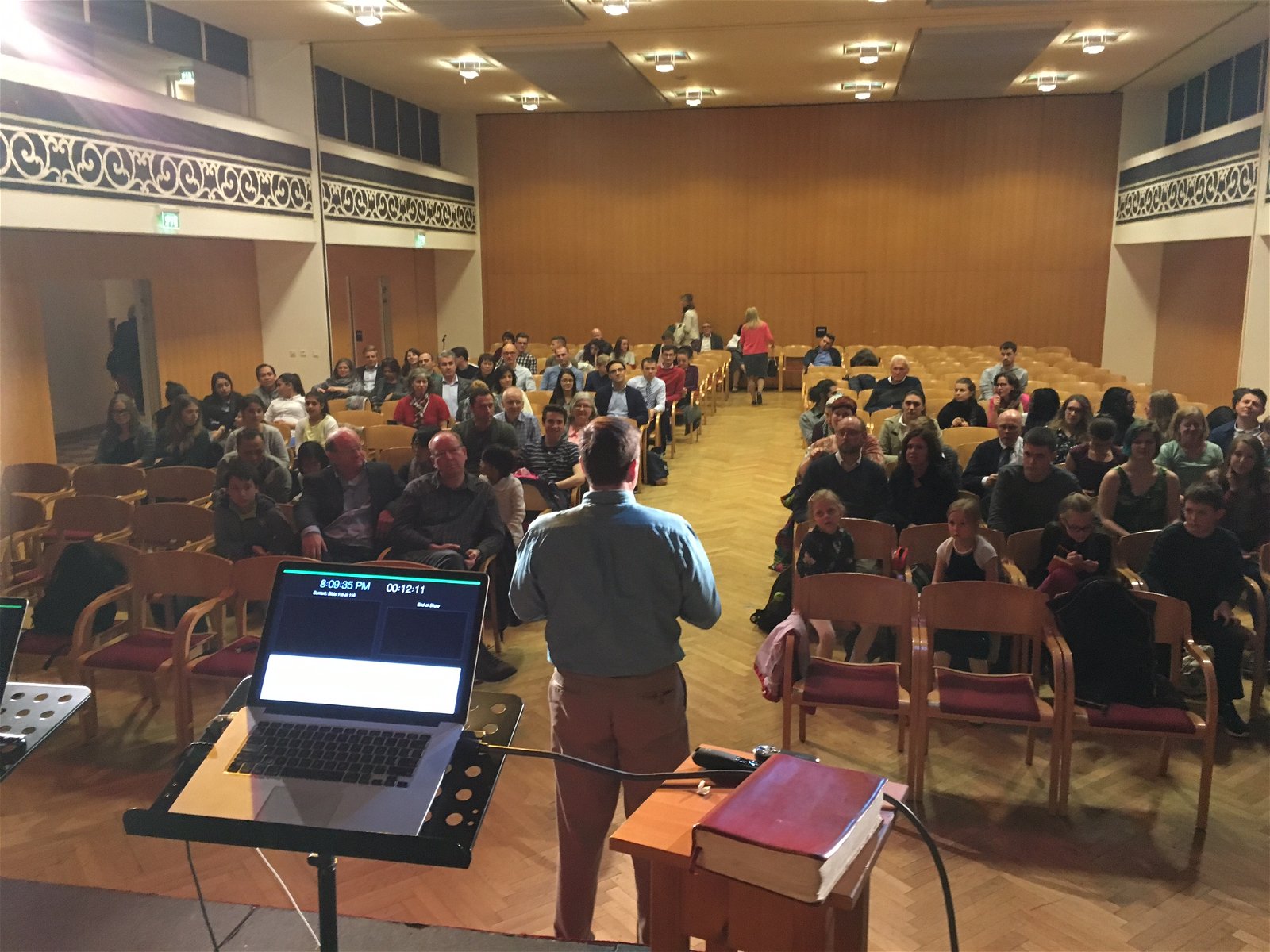 Many of those who came to two or more lectures told the pastor that they were sorry that more people weren’t there because they found the information so helpful and new. There was a good mix of young and old. And there was at least one non-Christian (a university student named Lukas) who came to three lectures and talked to me personally about his questions after each one. Say a prayer for Lukas, that the truth he heard would convict his heart of his need for Christ.

My translator, David, who also did the bulk of the translation of the slides, is a very sharp university engineering student who spoke amazing English. He loves the Lord, and his efforts on my behalf were herculean. He will fix a few mistakes he saw in the German slides and then the German and English slides will be made available to the several people that want them and will put them to good use.

On Sunday morning after the service, I talked to a sharp law student from Ukraine named Paulina. She had personally invited 85 of her university friends to my lectures but only 3 came, which is indicative of the evolutionary brainwashing of the culture.

The missionary pastor and his wife, Sarah, really want to address this issue again in the future, now that people know the kinds of lectures I presented. Austria is a beautiful and prosperous country that hides a great spiritual darkness. For decades it has been called “the missionary graveyard” because it has been such a difficult place to minister. Such a need for the gospel and sound biblical teaching. Todd (who has been ministering in Vienna for 20 years) and several others with his mission planting two other churches in the city are doing a great work and seeing fruit. 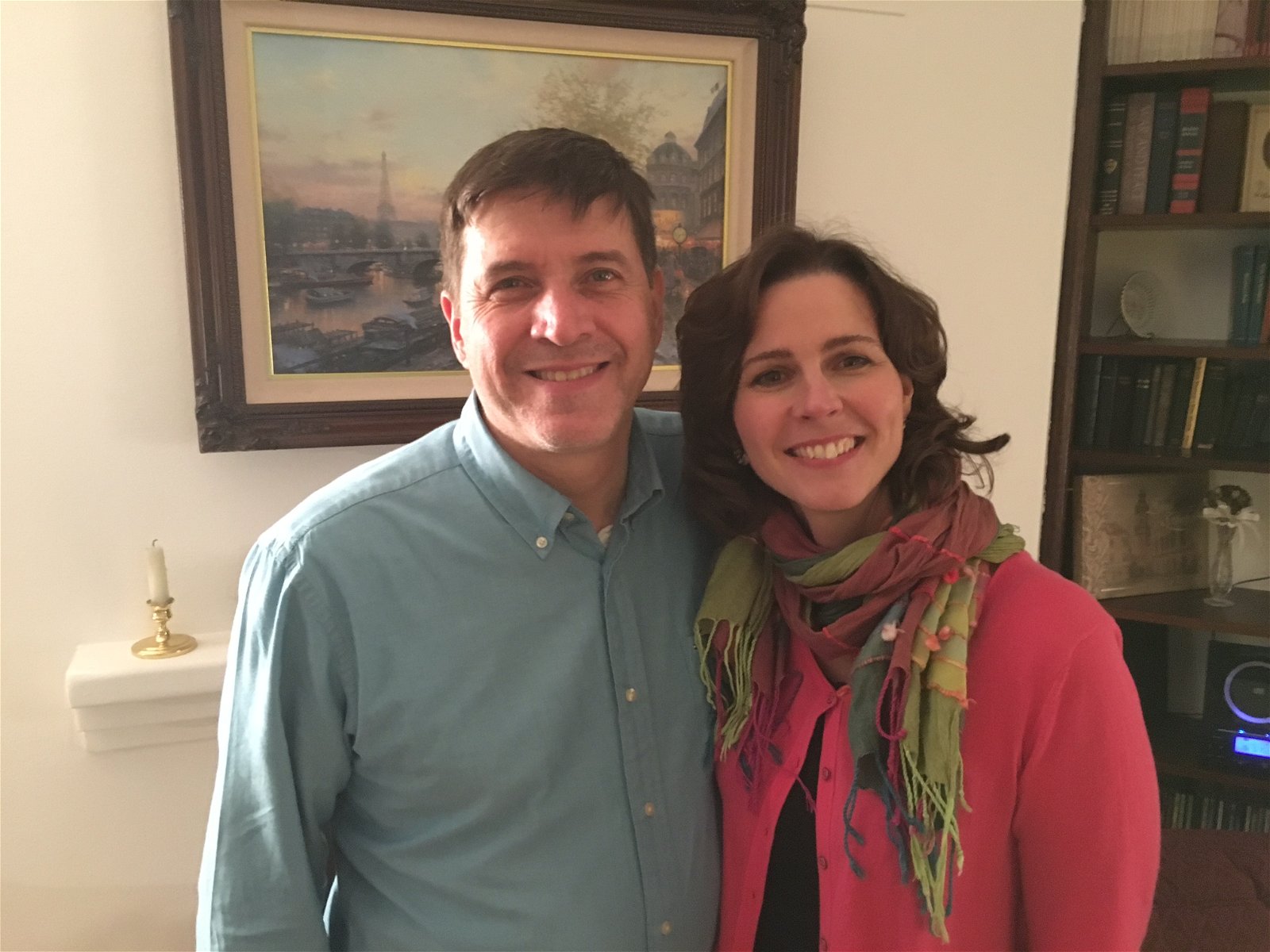 Please be praying for those who attended my presentations. I think a lot of good seed has been sown. Christians have been enlightened and encouraged, and nonbelievers have been challenged.

Please pray that the believers who heard Dr. Mortenson’s presentations will be encouraged to stand strong in their faith and that those unbelievers who heard the message will be challenged to consider the truth of God’s Word and believe the gospel. And please pray for our ongoing international outreach ministering which reaches many ethnic groups who speak various languages.