Millions of Years of Evolution: Just a Fluke?

Recently a short video was produced that claims to show “550 million years of evolution in 40 seconds.” This video was made for the book Evo, which is “a 30 meter [98 foot] long book folded in a zigzag way, which depicts our evolution through 153 great-grandfathers.” This book has apparently even inspired an evolutionary exhibition in one of Europe’s largest libraries in Amsterdam. Now, this animated video goes rapidly through the supposed evolutionary steps backwards from human to what appears to be some kind of flatworm or fluke, and then back again. But animating something doesn’t make it true! The evidence for evolution is simply not there, and this artwork doesn’t change that. In this world of computer animation and sophisticated computers, many people seem to have a problem discerning fact from fiction! When something is professionally produced and looks so real, particularly when it comes to evolutionary ideas, it seems many people are prepared to just believe it happened. They believe what they see on the basis of the words of those who produce it! 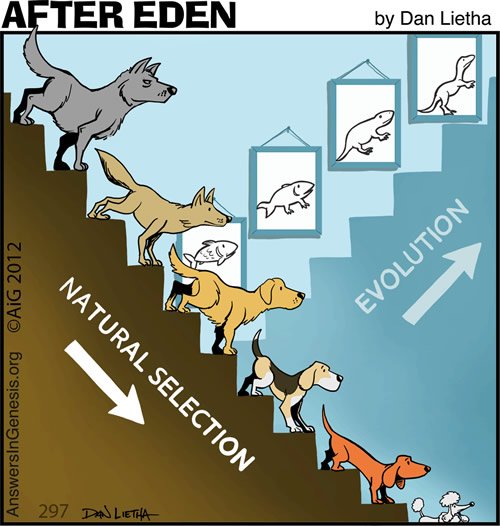 This short video shows evolution forwards and backwards as if it is the easiest thing in the world to turn an amoeba into an astronaut. What this video doesn’t show is the major problems with evolution. First, although the video does not directly address the origin of life, there’s the insurmountable problem of breaking the law of biogenesis—that is, life can only come from other life. This is all we’ve ever observed in nature and everything we know about biology confirms it—life comes from other life. Life can’t arise from non-living chemicals! And then there’s the other problem—how do you turn one kind of creature into a totally different kind? To do this, you have to add brand-new genetic information. But this has never been observed! There is no known mechanism that can add totally brand-new information into the genome to produce the types of changes needed for molecules-to-man evolution. So “pond-scum-to-people” evolution is impossible—it goes against everything we know from observational science.

This video actually highlights the silliness of believing that a tiny little flatworm could turn into a person through multiple different stages. Two passages of Scripture sum up this the thinking of a world that has rejected God and his Word:

For the wrath of God is revealed from heaven against all ungodliness and unrighteousness of men, who suppress the truth in unrighteousness, because what may be known of God is manifest in them, for God has shown it to them. For since the creation of the world His invisible attributes are clearly seen, being understood by the things that are made, even His eternal power and Godhead, so that they are without excuse, because, although they knew God, they did not glorify Him as God, nor were thankful, but became futile in their thoughts, and their foolish hearts were darkened. Professing to be wise, they became fools, and changed the glory of the incorruptible God into an image made like corruptible man—and birds and four-footed animals and creeping things. (Romans 1:18–23)

Evolution is nothing more than the vain imaginings of a world that has ignored the history given to us in God’s Word. The only support for evolutionary ideas is things like human-produced artwork. Humans aren't flukes; they were purposefully created in the image of God by God on Day Six of Creation Week. Answers in Genesis offers the following video refuting evolution for you to consider.

You can also order a pull-out book that portrays the true history of the universe in our store. This item is especially popular for churches, Sunday schools, homeschools, and Christian schools. Learn more about The Big Book of History and order your own copy today. And this book is not based on man’s fallible word, but on the infallible Word of God—and is confirmed by observational science. More importantly, we encourage everyone to “always be ready to give a defense to everyone who asks you a reason for the hope that is in you, with meekness and fear” (1 Peter 3:15) and be like the the Bereans in the New Testament who “searched the Scriptures daily to find out whether these things were so” (Acts 17:10–11).

Previous Article Teaching Argentinians to Defend Their Faith Next Article “I Jump with Excitement When I Just Hear the Music!”