Taking Creation to the Campus

Recently I had the pleasure of speaking at Maranatha Baptist University in Watertown, Wisconsin. This university is one of only a remnant of Christian colleges that stands on the authority of God’s Word beginning in Genesis.

Paul J. Scharf (MDiv), a graduate of Maranatha and Faith Baptist Theological Seminary, wrote a summary of this exciting AiG event. Paul is a contributor to our popular Answers magazine as well as an assistant to prominent theologian and defender of biblical authority Dr. John Whitcomb (of The Genesis Flood fame). Paul also serves as a Bible instructor at Academy of Excellence (Milwaukee, Wisconsin), as adjunct online Bible faculty for Faith Baptist Bible College (Ankeny, Iowa), and as an associate for IMI/SOS International. Here is the summary he wrote of my time at MBU: 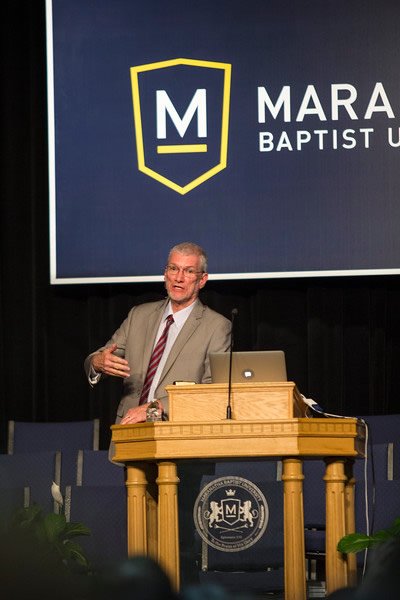 “Does it really matter if we take God at His Word?” Answers in Genesis president Ken Ham asked the overflow crowd at Maranatha Baptist University in Watertown. “It’s an authority issue.”

On April 13, 2015, Ken spoke in the chapel service at Maranatha, exhorting students and the many guests to build their lives upon the foundation of God’s Word—including the creation account in Genesis.

Maranatha (MBU.edu) currently has approximately 1,300 students and offers 39 bachelor’s degrees and seven graduate degrees. More than 200 classes are offered in an online format.

In his presentation, Ken told the students that Genesis 1 to 11 must be allowed to speak for itself with the same weight as the remainder of the Bible. He challenged them to follow the example of Martin Luther and metaphorically nail the creation message to their church doors.

“If we have that sort of Reformation, maybe God will bring revival,” he declared.

Ken commended Maranatha for propagating the gospel as it is built on the foundation of the creation message. By contrast, he showed how well-known professors from other Christian institutions—as well as influential authors of theological textbooks—have compromised on the issue of creation and allow worldly views of origins to be read into the text of Scripture, or even to supplant it.

Like Ken, Maranatha president Dr. Marty Marriott became initiated into Biblical creation by reading The Genesis Flood by Drs. Henry Morris and John Whitcomb. Marriott was grateful for Ken Ham’s ministry at Maranatha—which, he stressed, is committed to teaching young-earth creationism and the Noahic Flood.

“He has really encouraged us in our faith and it has given us a lot of information to support what we already believe,” Marriott stated. “This divides us between belief and unbelief. If you can’t believe Genesis 1, you can’t believe anything else.”

On Sunday before his visit to Maranatha, Ken delivered a relevance message and 7 C's of History talk in the morning and evening services at Cavalry Baptist Church in Watertown, where he also spoke before capacity crowds.

Ken talked about leaving a legacy of faith to future generations—and the necessity of beginning with the proper foundation—when he said, “Christianity is under attack in this nation. The attack has always been on the Word of God. We are losing the culture.”

Ken emphasized that the form that Satan’s “Genesis 3 attack” is taking in this day of technology and media is most often evident in the realm of historical science. He said that the church has failed to teach the foundational importance of God’s Word—and that the nation is reaping the disastrous consequences, with a new generation poised to lead the culture further away from the truth of God’s revelation.

On Sunday evening, Ken stressed the necessity of understanding Biblical chronology—and, likewise, how long ages of time are vital to a belief in evolution.

Ken said that many of the attacks that Answers in Genesis faces are focused on its refusal to succumb to a belief in “millions of years” rather than its precise opposition to evolution.

“This is a spiritual battle,” he said.

You can watch Ken's relevance message and the 7 C’s of History talk on the church website. 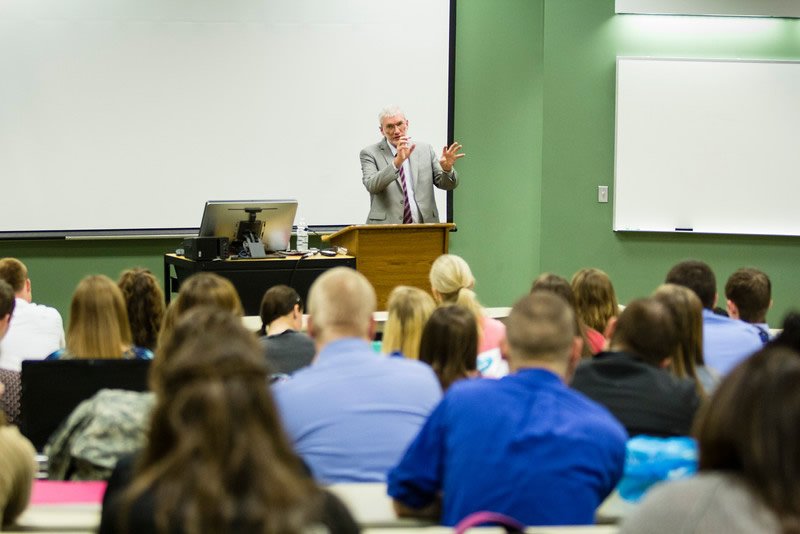 I am thrilled that Maranatha Baptist University takes a firm stand on Genesis. Sadly, most Christian colleges today have compromised on the clear teachings of God’s Word in Genesis with man’s ideas about the past. This compromise is corroding the next generation’s belief in biblical authority in all areas. After all, if you can’t trust what God plainly told us in Genesis, why should you trust what He told us anywhere? You can read more about this sad compromise in Christian colleges in my coauthored book, Already Compromised available in our store. You can see a list of Christian colleges whose presidents have signed our statement of faith here. You can also read a report about my presentation at Marantha on the school’s website. Also included is an audio file of my presentation detailing why it’s important for Christians to take a stand on six literal days of creation and a young earth. I stated that the issue of six days of creation and the age of the earth is an authority issue, an indirect salvation issue, and a gospel issue. I encourage you to read this report and listen to the 50-minute presentation.

If you are interested in having me or another AiG speaker come to speak at your church, school, or college, I encourage you to visit our events page and watch my short video on hosting one of our excellent speakers. In this day and age when many in the church are rejecting God’s clear words in Genesis, it is more important than ever that we stand firmly on the authority of God’s Word from the very beginning! Our speakers can help your group to do just that.

Previous Article Ken Ham in B.C. Comic Strip Next Article The Creation Museum Continues to Draw Crowds—Including at Its Conferences