Just a thank you . . . for organising an excellent Mega conference this weekend. My wife and I were speechless by the end of the three days and left very much convicted and encouraged.

The above was in an email sent to our office after the very successful and extremely well attended Mega Conference in the UK this past Thursday evening through Saturday evening. Over 1500 people, including over 100 pastors registered for the event. By far the majority stayed for the entire time. 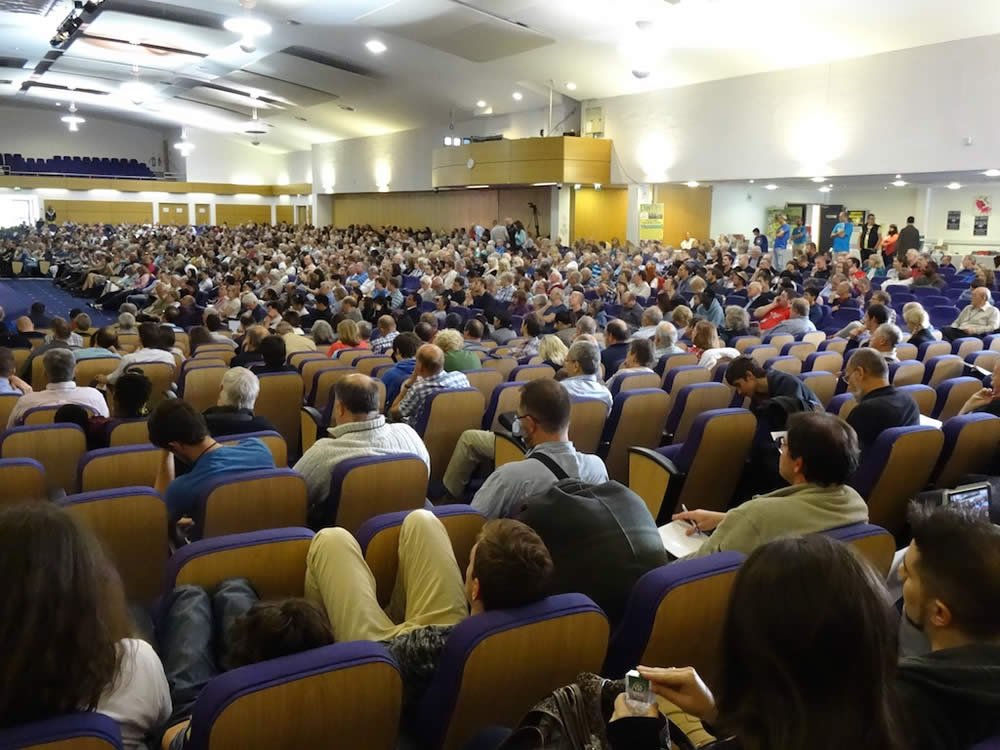 People were becoming more and more enthused with all they were hearing from the many different presenters (including AiG speakers/scientists/theologians) during the conference time. I believe audience members were particularly impacted on Saturday afternoon when Dr. Stuart Burgess (professor of engineering design at Bristol University) spoke. Not only did people hear from a man who is an articulate scientist who has developed leading technology, but he’s also a man of God who has been prepared to stand publicly for the authority of God’s Word beginning in Genesis—despite various attacks because of his very public position on Genesis. At the end of his presentation, the more than 1500 audience members spontaneously clapped, rose to their feet, and gave Stuart a resounding standing ovation. It was so thrilling to see all these people so excited—and so emboldened by what they heard.

People coming from Ireland, Northern Ireland, France, Poland, Albania, Romania, Switzerland, Hungary, USA, Australia, and India. There were also a number of Christian media representatives, including one from Holland. Here is a photo of me with the reporter from Holland: 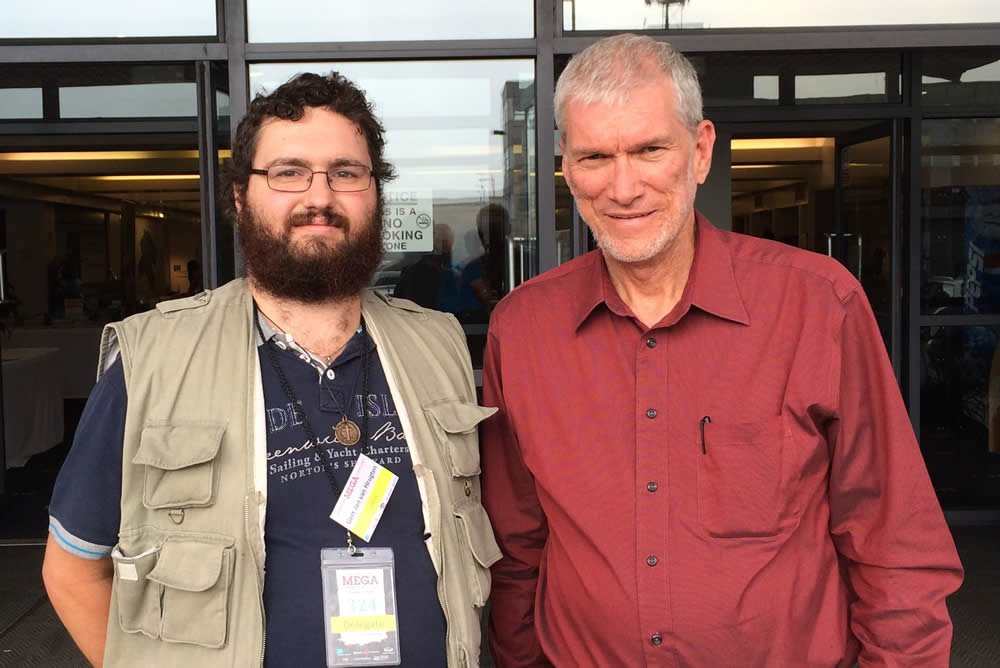 Thousands of AiG resources were obtained from people hungry for the truth of God’s word beginning in Genesis. The resources tables were crowded the whole time! These resources are going to impact churches and others as people use them to tell others the truth concerning God’s Word beginning in Genesis! Many told me they were now prepared to witness to their non-Christian friends and family, as they now had answers to the skeptical questions these people ask. Here are photos of people crowded around the resources tables: 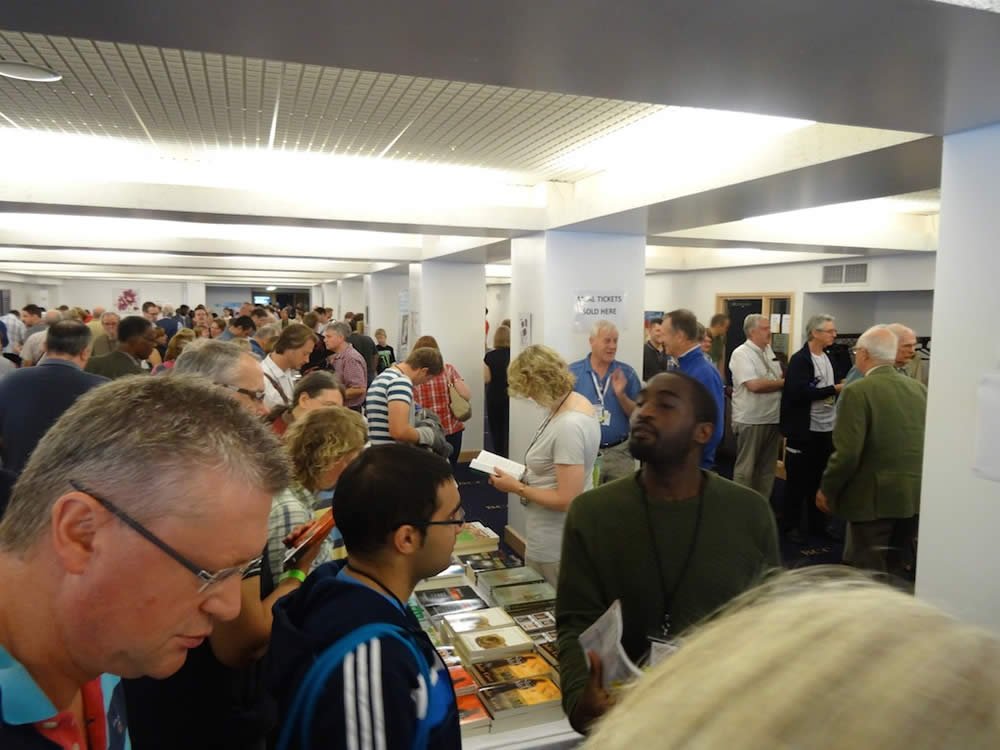 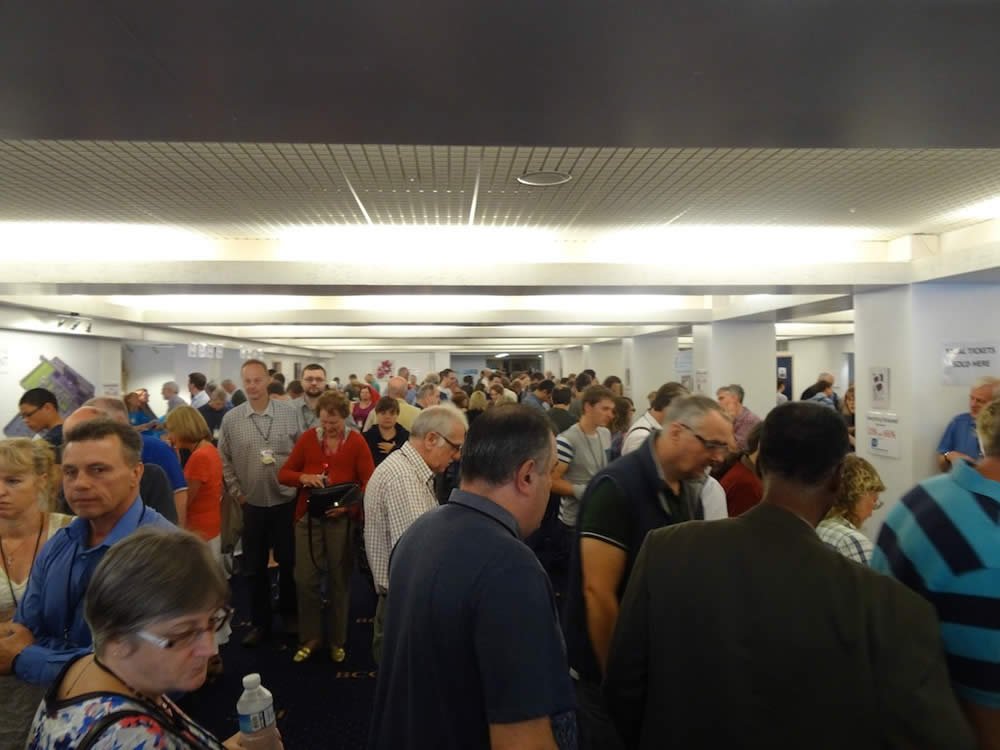 As well as a number of speakers from the UK (such as Dr. Stuart Burgess, Dr. Andy Macintosh, and Dr. Steve Lloyd), I along with John Mackay from Creation Research Australia and Ray Comfort from Living Waters Ministry gave the main keynote presentations.

Here is John Mackay at the conference: 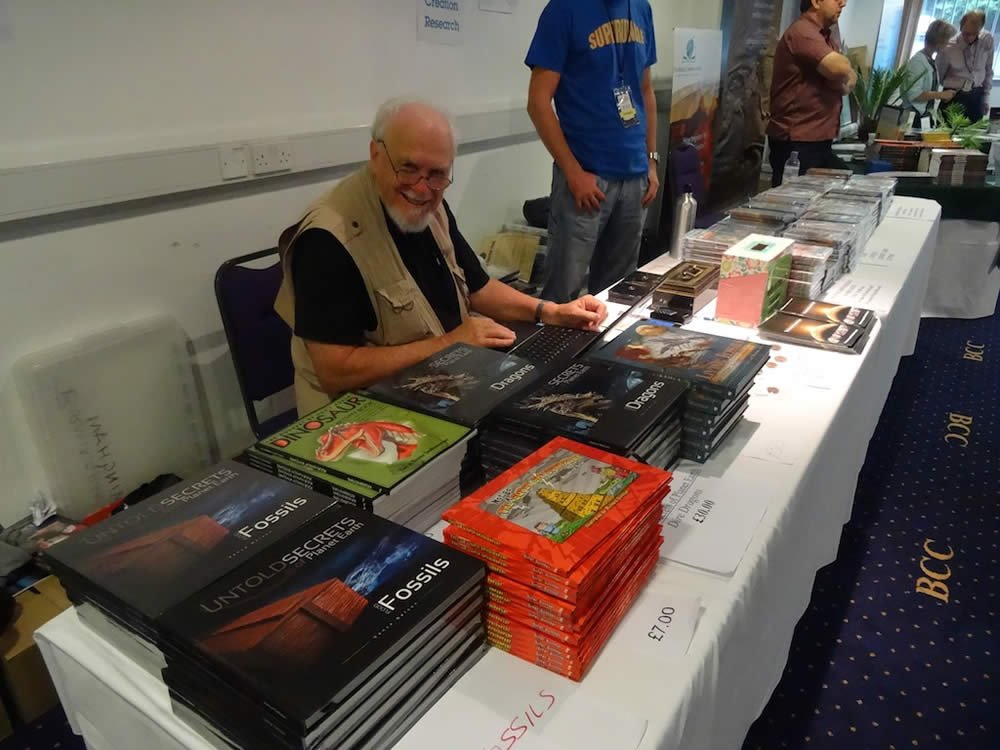 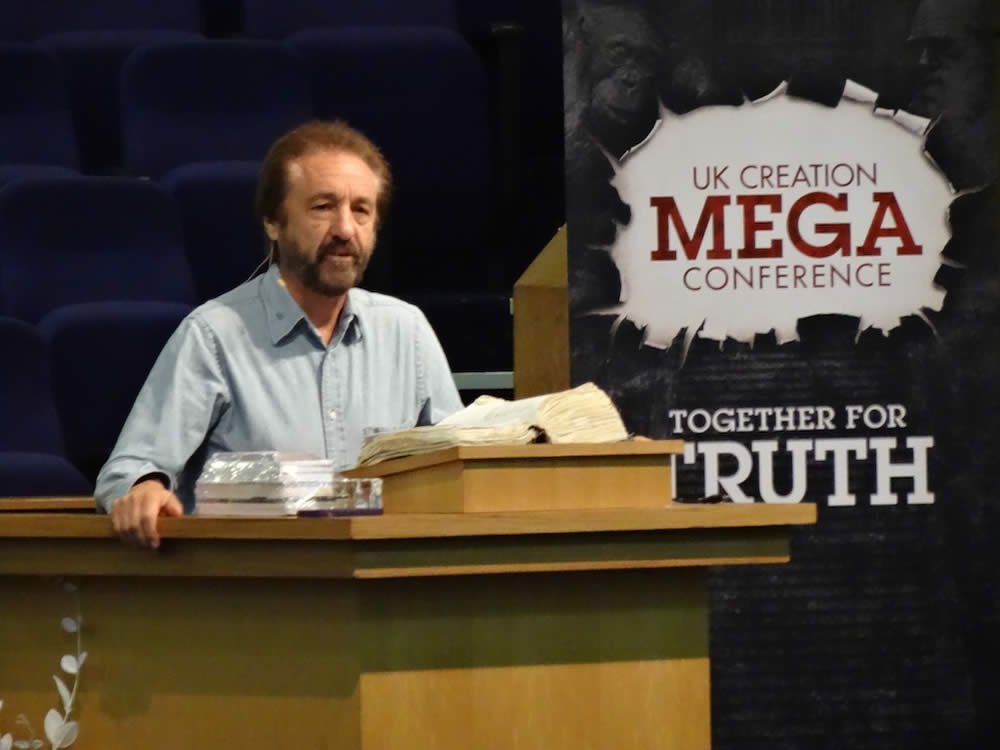 AiG singer, dinosaur sculptor, and speaker Buddy Davis was also featured at the conference. Buddy sang many songs and spoke at the children’s workshops. Here is a photo of Buddy as he led the children in “Billions of Dead Things” for the conference audience: 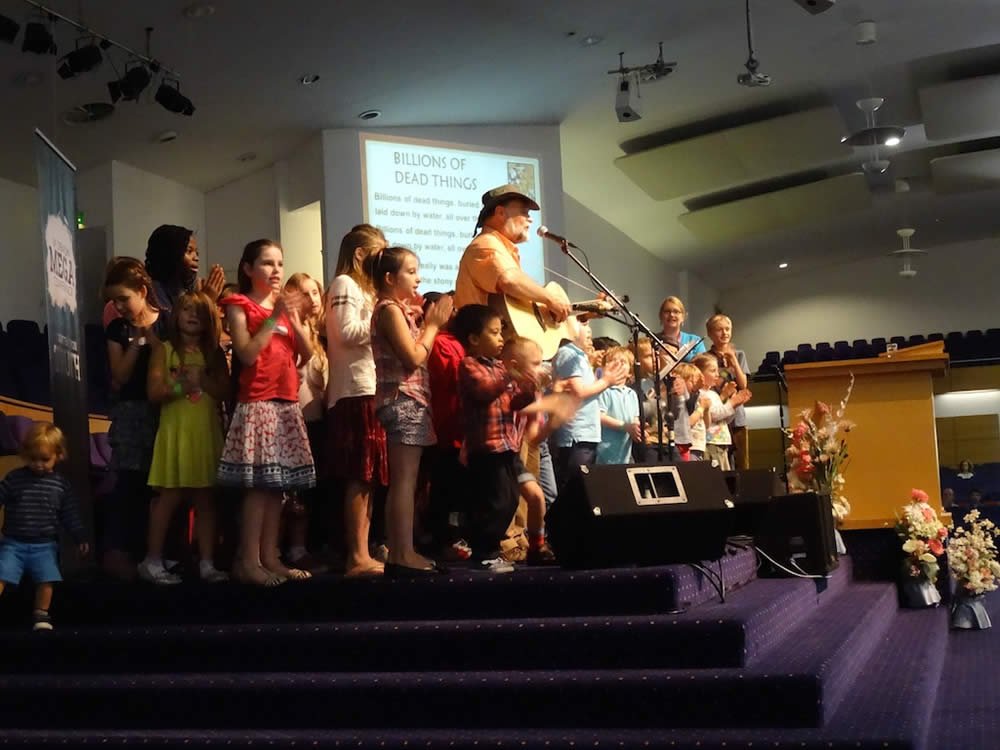 It was amazing and thrilling to see the numbers attending the conference continue into Saturday with numbers even increasing: 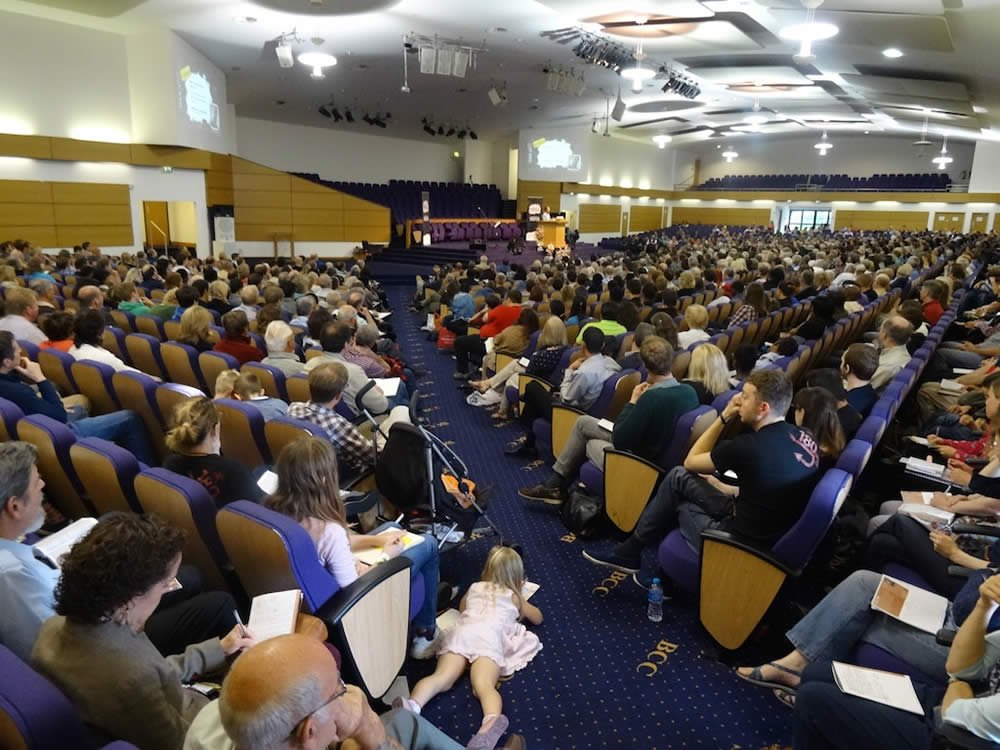 I also heard numerous testimonies from people at the conference:

Your ministry led me to Christ.

Thank you for providing us with answers—our Christian faith is attacked at University and we need answers.

[From a pastor:] Our church started using AiG’s ABC Curriculum—it is by far the best such curriculum we have ever seen.

Here is a video clip from one of the conference participants:

At the end of the conference, we announced that we will run another Mega Conference in the UK next year—in Belfast, Northern Ireland.

Over the years, AiG speakers have spoken at many churches and conferences in the UK. We established a UK office with full-time staff many years ago. We believe this conference will have a great impact on Christians and non-Christians. Pray for your UK staff as they now are busier than ever—people are hungry for the truth!