Many of you have heard about or even watched the new Cosmos TV series hosted by evolutionist Neil deGrasse Tyson. Dr. Elizabeth Mitchell, a medical doctor and AiG writer, has written a detailed review  of each of the 13 episodes in the series, along with leader and participant discussion guides, to help viewers look at Cosmos from the biblical perspective.

Here is my video where I talk about the recent Cosmos series and Dr. Mitchell's reviews:

Well, at our staff meeting this week, Dr. Mitchell gave a synopsis of the more controversial parts of the series and how to understand Tyson’s beliefs through the lens of Scripture. 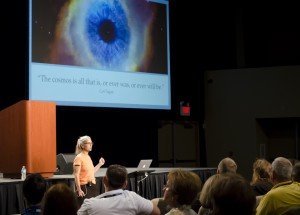 The Cosmos series was marketed as a way to rekindle interest in science among people of all ages, Dr. Mitchell explained, to promote scientific literacy. Sadly however, it is clear from the content of the episodes and statements of the series creators that science literacy—in their view—is defined as agreement with evolution in all its forms.

Throughout the episodes of Cosmos, Tyson tries to pass off evolutionary speculation as proven scientific fact by telling what Dr. Mitchell called “stories.” Really, much of the supposed evolutionary history that Tyson presents, such as the alleged evolution of the eye, is pure speculation—it can’t be observed or repeated.

Now, I blogged  recently about the way Tyson confuses observational science with historical science in Cosmos. You see, he wants viewers to accept on blind faith that molecules-to-man evolution is fact, when it has never been observed.

But what I found really significant about Cosmos was how Tyson compared believing in an evolutionary origin to having a spiritual experience. Sadly, Tyson is worshipping and serving “the creature rather than the Creator” (Romans 1:25) by the way he exalts the religion of evolution and millions of years. Now, Dr. Mitchell pointed out in her presentation to our staff that Tyson was very condescending toward Bible-believing Christians. But at one point, he actually shares his own brand of spirituality:

A central premise of traditional belief is that we were created separately from all the other animals. It’s easy to see why this idea has taken hold. It makes us feel special. But what about our kinship with the tree? How does that make you feel? . . . Some claim that evolution is just a theory as if it were just an opinion. The theory of evolution like the theory of gravity is a scientific fact. Evolution really happened. Accepting our kinship with all life on earth is not only solid science; it’s, in my view, also a soaring spiritual experience.

Of course, I’ve been saying throughout my entire 30+ years of ministry that evolution is a religion—and now Tyson has confirmed that! Evolutionists really are teaching people to worship the creation and not the Creator.

Answers in Genesis has always stressed that our origins matter, and thus we have a presentation titled Why Genesis Matters by Dr. Tommy Mitchell—his presentation is one of the many resources on this subject. Similarly, Dr.  Elizabeth Mitchell shared with us on Tuesday morning why Cosmos host Tyson says that understanding and accepting his evolutionary stories about our origins is important. In other words, both Answers in Genesis and Tyson say that our beginnings are key and thus have a desire to know the truth about our origins.

Well, Tyson, in the final episode of the series, says that contemplating “the legacy of evolution” is “uplifting,” and that he wants to know “that feeling is real” and to be remembered for his role in this “sacred searching.” Tyson, sadly, though claiming to want to know truth, is busy suppressing the truth—as Romans 1:18 teaches. “Professing to be wise, they became fools” (Romans 1:22). What, indeed, can be more foolish for an intelligent man who wishes to know truth to do than to categorically reject the truth provided by the omniscient Creator of the universe?

The truth—the real truth—is found in God’s Word and in knowing Jesus Christ (John 14:6) who made clear (John 5:46–47) that some who reject Him do so because they stumble on the writings of Moses, which includes Genesis, the truth about our origins and the origin of sin and death.

If you know people who have been watching this TV series (shown in 70 countries) or if you want to equip yourself to respond to the claims made in Cosmos, I encourage you to download our leader and participant discussion guides from our website, and to read through Dr. Mitchell’s reviews—and the many articles linked in them—for additional, detailed scientific and biblical information.

Also, Dr. Mitchell and Jeremy Ham have written a web article today about the criticism from Salon.com about AiG’s Cosmos review. As you read the Salon essay, you will see how we are engaged in a spiritual battle and why it is so important to “put on the whole armor of God, that you may be able to stand against the wiles of the devil” (Ephesians 6:11). And it starts with making sure your foundation is based on the solid truth of God’s Word.