Equipping People Around the World—Including in Honduras!

Steve Ham, AiG’s director of international outreach, returned last weekend from Honduras, where he and two other AiG staff shared the truths of Scripture with pastors, teachers, and students. The response was incredible! I wanted to share Steve’s account of his trip with you, to encourage you that the work you support at AiG is making a difference for the gospel, including outside the USA.

Sometimes we underestimate the impact that the philosophies of evolution are having all over the earth. Our Answers Worldwide team—Joe Owen and Steve Fazekas—just returned with me from San Marcos de Colón in Honduras, where we completed four days of exciting ministry. When we arrived, we really did not know what to expect. San Marcos de Colón is right near the border between Honduras and Nicaragua and is the location of the Good Samaritan Baptist Mission. The ministry, originally founded by Bob and Joan Tyson, has done phenomenal work. We met many men who had come to know Christ both from Nicaragua and Honduras because of the faithful preaching of the gospel through Bob, Joan, and others in the ministry. Good Samaritan ministry has a Bible institute, a Christian school, a child sponsorship program, a food kitchen for the elderly, and more. It was a great privilege to serve in this ministry for a few days with Bob and Joan’s son Steve and granddaughter Stephanie. 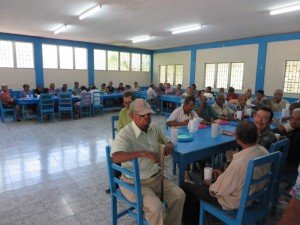 Food kitchen for the elderly 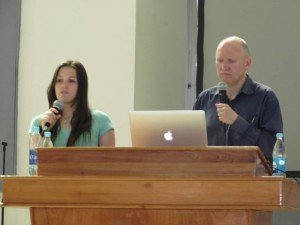 Our main purpose for going to Honduras was to train the pastors to be confident about God’s Word, showing the reliability of its history in what we see in the world. We went to help these men become bolder about the reliability of the Bible and the gospel of Christ. When we arrived, we first spoke to the school. Joe Owen, a fluent Spanish speaker, presented his talk, teaching that there’s only one race of human beings. As a result of this talk, the principal of the school brought all the senior students and teachers to the pastors’ conference. The auditorium the next day was filled with pastors from Honduras and Nicaragua, as well as teachers and students. 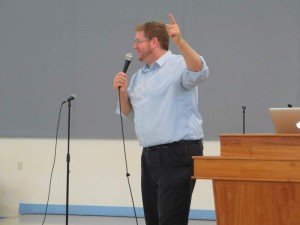 Joe Owen teaching about “One Race” 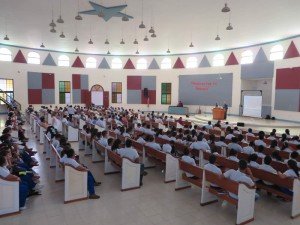 Pastors, teachers, and students in Honduras 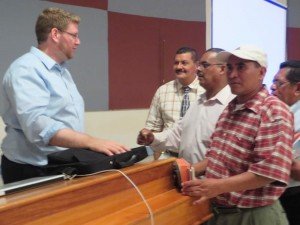 Pastors with Joe, hungry for Answers

Not long into the conference, the questions started coming. People had been confused about the gap theory, which had been presented by other missionaries who had come to Honduras. They were also confused about how to answer the questions that they were getting in their own congregations. This was puzzling to us considering that very few people owned a television in the rural areas of Honduras. We found out that questions were coming through what people had heard on radio but also from going to Internet cafés in local townships. The questions about Genesis were particularly strong among the students. They were asking all the same questions we hear wherever we go—topics like Cain’s wife, the existence of God, natural selection, evolution, the days of Genesis, and many more. It was a great joy not only to answer these questions, but also to see the pastors so excited about the answers and then talking among themselves.

The trip left us with a joyful heart but also with a burden. We were able to point people to the authority of God’s Word and show them the reliability of its history. Giving real answers to questions that they thought were unanswerable was overwhelming, and this was reflected in the various testimonies we heard from pastors and students. The teachers also gave an assignment to the students to show their understanding of these biblical answers. At the end of the conference, all the teachers in the school came out to the front and asked for prayer as they seek to teach biblical creation to their students. This was a truly moving moment as some of the pastors came down to pray for them. 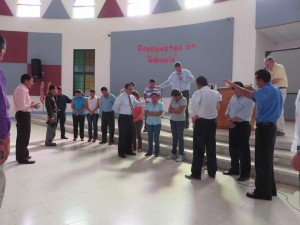 A special prayer time for teachers

With blessing comes responsibility. The Good Samaritan ministry has been blessed in that children from their sponsorship program are now going to universities in Honduras to train for future professions. The assistant principal told us of one young man who had gone from the school to university. This man told the assistant principal that he had rejected the faith because of the teaching of evolution in the university. The pastors also told us of children struggling in their faith because of these issues. While they were overjoyed with getting real answers to the questions they were facing, the pastors were also pleading for more Spanish resources and assistance to help them fight this battle and to more confidently point the next generation to Christ. 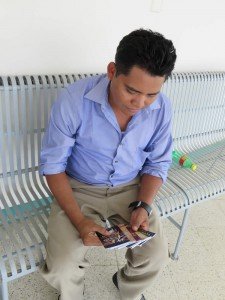 Please pray for our Honduran brothers and sisters, and please consider partnering with us as we translate more materials and bring more of the Answers in Genesis ministry to the Latin American Church that needs this help. 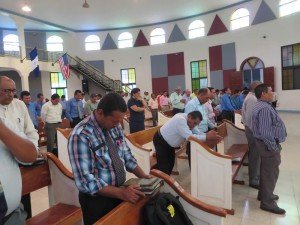