I’m thrilled to announce that there’s a new collection of manuscripts in the Creation Museum’s Verbum Domini exhibit as of yesterday. This stunning collection was graciously loaned to us from the famed Green Collection. The entire collection will eventually be placed in the future Museum of the Bible in Washington DC.

Here’s a description of the new collection from the Creation Museum’s website:

Museum of the Bible presents “Preserving the Word: Scribal Practice Through Time,” a six-month exhibit highlighting the individuals who have helped preserve the most important book ever written, the Bible.

Scribes are people trained in the craft of copying, composing, and recording documents by hand. They have been present in almost every literate society since writing first emerged in Mesopotamia thousands of years ago. Training to be a scribe was a long and intense process, and for much of human history only a select few—usually the male children of wealthy elites—were chosen to learn the profession. In the Middle Ages, finally, nuns, as well as monks, were employed in the task of producing manuscripts.

Among the most important functions of the scribe is the copying of religious texts and documents. From ancient Egyptian funerary rites to the Dead Sea Scrolls, many of our earliest examples of writing are religious in nature. Indeed, it is only through the work of scribes that we have the Bible in our hands today. Now, this world-class exhibit—located not far from our brand-new Allosaur exhibit—is available at no additional cost to Creation Museum guests. 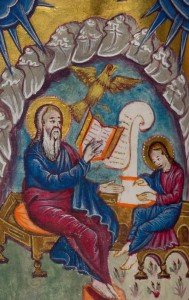 Don’t miss out on this incredible new display of Bible manuscripts. And don’t forget that all children 12 and under get into the Creation Museum for free for 2014 with a paid adult. Plan your visit today!

Previous Article Equipping People Around the World—Including in Honduras! Next Article The Creation/Evolution Debate Continues