For the past few days I’ve been away speaking in the Dominican Republic (having a wonderful time of ministry there, as I wrote yesterday). Meanwhile, Mark Looy of our staff, who organized last week’s creation/evolution debate with Bill Nye “the Science Guy,” has been collecting all sorts of interesting information about the debate to put in our records. I think you’ll find his report to be interesting reading. In fact, Mark has collected so many items that today I will feature part one of his report. Return tomorrow for part two on this blog.

Ken, while you’ve been away, I have been collecting some intriguing facts and photos related to your debate with Mr. Nye—most of them probably not known by our supporters. They will be presented below in no particular order. 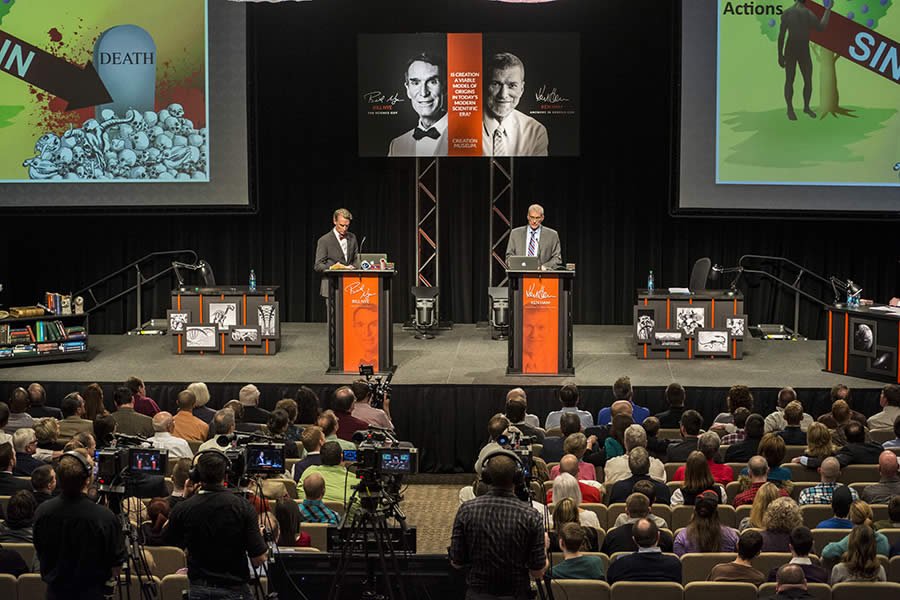 By the way, as you are preparing to head home today from your speaking ministry in the Dominican Republic, I wanted to remind you that today is “Darwin Day”—the 205th anniversary of Charles Darwin’s birth. Appropriately, one of the things this report can do is to expose many of the false claims made by one of Darwin’s most avid supporters, Bill Nye. Also, I want to draw your attention to two major Darwin-related articles on the main AiG website: one is a review by Dr. Elizabeth Mitchell of the new HBO documentary Questioning Darwin that is being released this week (you were interviewed for it, and the Creation Museum is prominently featured), and yesterday there was an eye-opening essay by Dr. Terry Mortenson on Darwin and what influenced his beliefs and writings.

Much has already appeared in the media and in blogs—as well as on this AiG website—about your debate last week with Bill Nye “the Science Guy.” But beyond (1) the enormous number of people who have watched the debate either live or in a recorded archive like debatelive.org (4.1 million stream connections, representing at least 10 million viewers), (2) 70 media representatives who attended the debate, and (3) the amount of water-cooler talk that took place in the days following, there was still much more to the event than what has been generally reported.

Here then is a potpourri of interesting facts and tidbits about a significant event in the history of the church in America:

While you have been gone, our web team has made many additions to our debate page, which has links to articles rebutting almost all of the statements/assertions brought up by Mr. Nye during the debate. Of course, there was the video the day after the debate that deals with Mr. Nye’s claims.

A reporter with Time magazine engaged in what I would call “race-baiting.” As she chronicled the worldwide live stream of the debate, she wrote, “The cameras pan to an all-white audience.” The implication was that people of “color” were not welcome or invited, as if the debate’s online ticket purchasing system could somehow exclude people who have a darker complexion! Ken, you noted in a blog post last week that from the front of the auditorium—even with the glaring lights from above that can blind you from seeing past the first few rows—you could see two darker-skinned people, who were sitting in the first three rows. (There was actually a third person with a dark complexion a few feet from your podium that you did not see.)

Interestingly, an atheist wrote in defense of the Time magazine reporter, saying that you, Ken, could find only a few dark-skinned people in the entire crowd. This atheist wrote, “I would never read what Dias [the Time writer] wrote there and assume anything beyond ‘The audience has a lot of white people in it.’” The atheist is apparently not good at math, for all (the word the Time reporter used) is not the same as “a lot” (the word the atheist used). Yet the atheist insisted that the reporter “was accurately depicting the crowd”! The atheist then argued that the writer was merely saying that “there weren’t a lot of colored people in the crowd.” But, Ken, she used the word all. Later in her report, the Time writer acknowledged that she did find darker-skinned people in the audience.

Well, at least this atheist admitted in his piece that he knew you weren’t a racist. He has seen the anti-racism exhibits in the museum, just a few yards from the debate auditorium, in fact.

While you were speaking in the Dominican Republic, a profile of you was aired on Channel 19 in our Cincinnati area on Sunday. It ran over six minutes, which is an eternity for broadcast news. I thought it turned out rather well. Your interview with reporter Tricia Macke can be watched on the Fox 19 website.

Nye Supporters Were Not Excluded from the Audience!

Before the debate, Mr. Nye was heard to remark that he was glad that his agent had accompanied him on this trip, because at least the debate audience inside the hall would not be 900-0 against him, but “only” 899-1. Apparently Mr. Nye was not informed by his agent and publicist (because we had informed them) that the debate tickets were open to anyone who went online to purchase them. Based on the reaction that Mr. Nye received during the debate and with people that he met afterwards, it was clear that many people in the audience were his supporters.

In addition, when ABC TV aired its report on the debate for its Nightline program, it was obvious from the interviews conducted by the correspondent, Dan Harris, that many Nye fans got tickets and were there in the hall. In the weeks leading up to the debate, we lost count of the number of bloggers who remarkably declared that the debate audience would be stacked in favor of you, Ken, apparently believing that our online ticketing system had some special NSA-like software that could discern whether or not the purchaser was a supporter of you or Bill Nye! The balanced and fair Nightline report can be watched on the ABC News website.

I heard this wonderful story from an AiG staff member yesterday:

A friend from Maine related to us that his family was praying for a young man, Kyle, who was having a hard time trying to reconcile science with faith. The family had witnessed to him many times and invited him to watch the [Nye] debate, which he did. Afterward, a friend was able to get him into the Scriptures, and Kyle finally repented and received Christ.

When asked what part the debate played in him finally receiving Christ, Kyle’s friend replied, ‘If anyone actually won the debate, it was Ken Ham. [Ken’s use of] the orchard model of species (versus the evolutionary tree) impressed him in particular, but that it was a greater trust in the Bible that helped him receive Christ. – C.M. 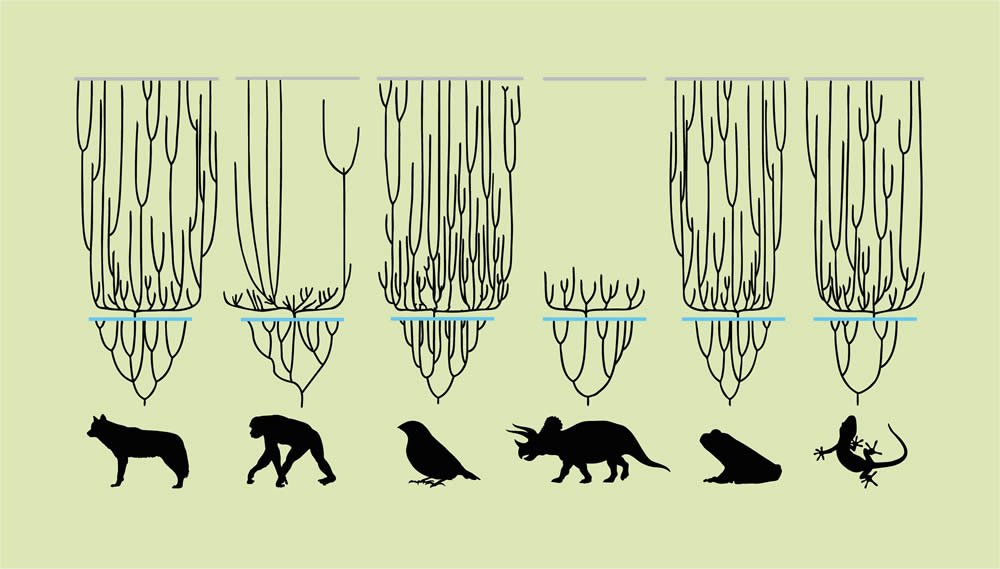 Now, that was the highlight of the entire debate for me, Ken, even though it occurred after the event.

Bill Nye has said that a scientist who is a creationist is a “bad” scientist. Well, real scientists continue to visit us, and of course we have several full-time staff members who hold earned doctorates in science. In fact, the week that Bill Nye was here, so was Dr. Marcus Ross, who gave a fascinating talk on dinosaur anatomy. Dr. Ross, of Liberty University, spoke last week to AiG’s faculty and other staff on theropod dinosaurs, after spending a part of the morning examining AiG’s world-class and newly donated allosaur dinosaur (to go on display in the museum in late May). 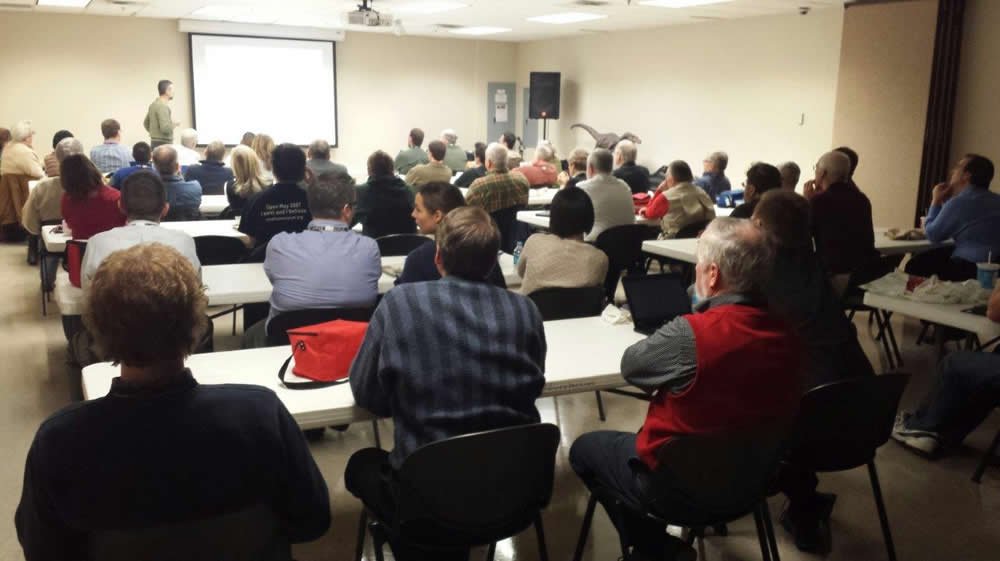 As predicted, there were many people in the Intelligent Design movement (and even some young earth creationists) who were harshly critical of you for using a lot of Scripture in the debate, and then presenting just a few evidences from science that confirmed the Genesis account of creation. Some creationists who are more “evidentialist” than “presuppositional” in their approach to apologetics were shocked that you dared to use so much Scripture to defend your worldview. (Even then, one of our supporters said the very opposite: that you did too little of exposing how evidence can be interpreted through the lenses of two differing worldviews—sigh.)

For many of these creationists, I think they were used to the famous evolution/creation debates of the 1970s and 1980s, where most of them were maybe 99 percent science content with only some allusion to the Christian faith mentioned at the end. Because the Creation Museum, our biblical worldview magazine Answers, radio programs, and other outreaches proclaim biblical authority first and foremost, why would it have been a surprise for some creationists that you would use any other approach in the debate? It’s a part of our ministry DNA. In fact, we were even praised by an atheist for “telling it as it is” (in a Facebook posting): “While I don't share your views re: Creation, and am an Atheist myself, I admire your conviction and was somewhat impressed that you held true to your beliefs unlike those wishy-washy Intelligent design types.”

Before the debate, Ken, you received about 150 emails and Facebook postings offering advice on how to argue against Mr. Nye, including what evidences you should use. Many of them posed what could be called “silver bullets” arguments, which they thought would somehow render Mr. Nye helpless. Of course, there is no such “magic bullet.” Just before you conducted the debate, I predicted you would probably hear from three times as many people after the debate who would complain that you should have used some of these “silver bullet” arguments. Well, at last count, we are getting very close to that number of 450 “Monday morning quarterbacks!” Thankfully, most of them also had nice comments to say about the debate, but they still wanted to let you know what they would have argued.

One Christian commentator suggested that you, Ken, should have been more aggressive in the debate—more like a “junkyard dog,” he said. Now, it’s worth noting how that kind of debate strategy squares with the second half of 1 Peter 3:15 and with Colossians 4:6, which says, “Let your speech always be with grace, seasoned with salt, that you may know how you ought to answer each one.”

A few times in the debate, Nye offered the comment that “I’m not a theologian.” Yet he spent a great deal of his time criticizing the Christian faith. For someone not trained in theology, he came across as trying to sound very knowledgeable about a religion he admits he knows little about.

On the evening of the debate, I recall the personal notes that you and Mr. Nye exchanged. Here they are, including an inscription you wrote to Mr. Nye inside your book The New Answers Book 1. 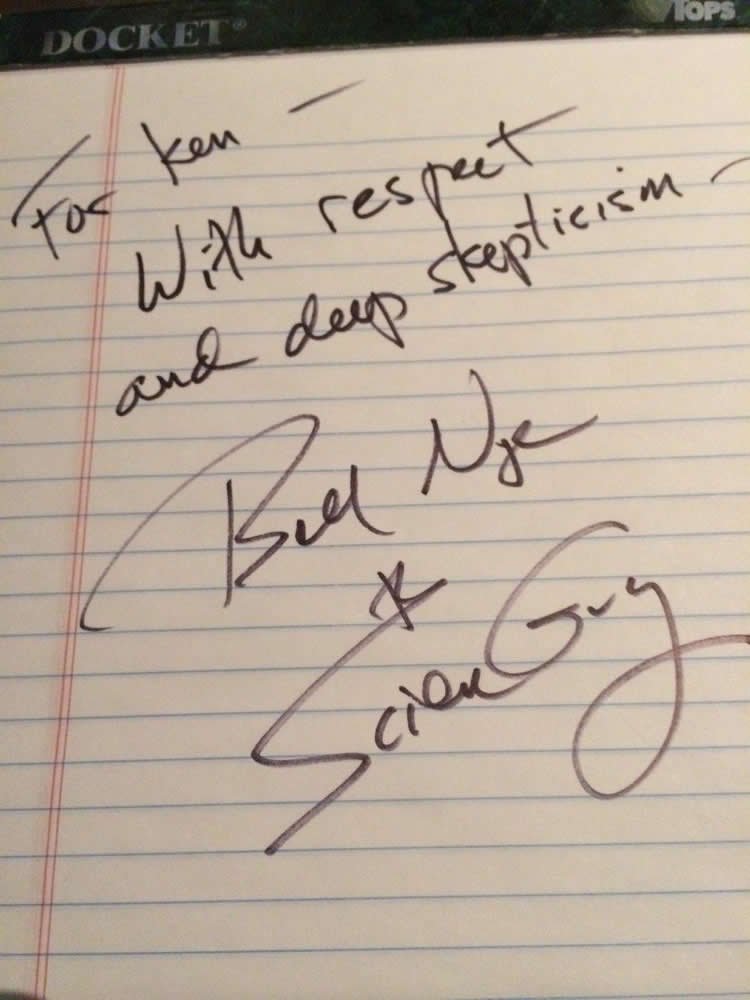 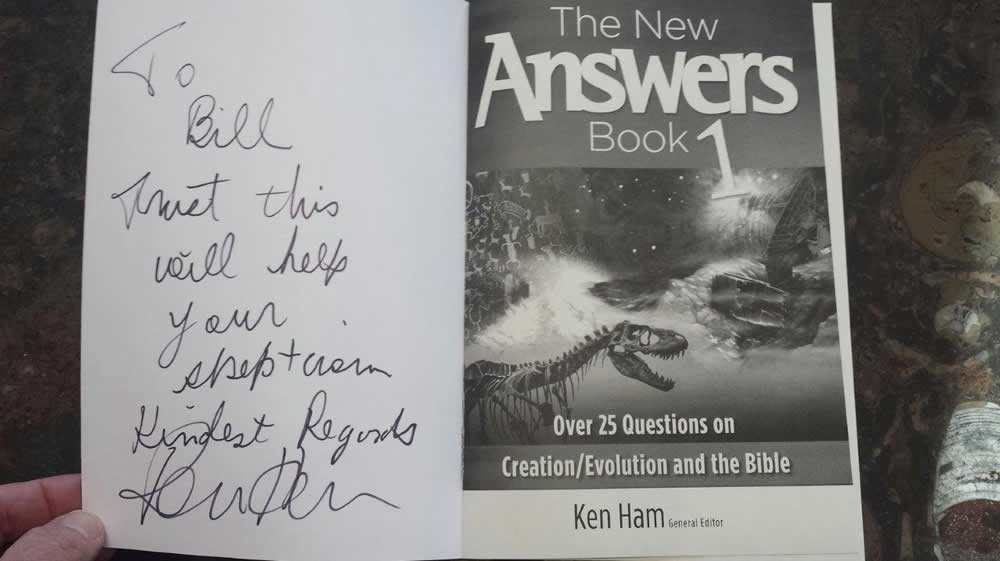 I will end part one of my “potpourri” here of debate-related items. Before I do, I wanted to draw your readers’ attention again to our debate answers page, which has links to articles rebutting virtually all of the statements/assertions brought up by Mr. Nye in your debate. Also, I encourage people to Debate Answers in the video you produced the day after the debate that dealt with some of Mr. Nye’s claims.

Part two of my debate report will be sent to you tomorrow.