Yesterday marked the beginning of our new billboard campaign to reach atheists on both coasts of America. Residents and tourists in New York City and the San Francisco Bay Area (and in a few days, Los Angeles and Hollywood) will see these new billboards that encourage them to visit AiG’s website and to read articles and watch a video that present the case for God’s existence. (For more information on the campaign, read our press release from yesterday.) 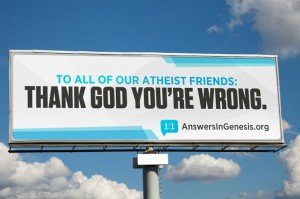 I recently learned that two other major billboard campaigns began over the last couple of weeks—both from major atheist organizations. Now, we’ve seen a number of atheist billboards go up over the last few years—especially around Christmas time, when atheists work to convince people that Christ didn’t really exist or that He was not truly God. Many of the atheist billboards directly attack Christianity. Yes, it is a billboard battle of sorts, but in reality it’s a spiritual battle. The battle has been going on for 6,000 years—since the event of Genesis chapter 3 when Adam rebelled against God and sin and death entered the world.

One of these new atheist billboard campaigns—put together by the Center for Inquiry—tries to convince people that they can be just as happy without God. One of the billboards (located in Michigan) reads, “Millions of Americans are living happily without religion.” Of course, atheism, a blind faith that believes life is the result of natural processes, is in itself a religion—something held to with ardor and faith. What they really mean is that people are supposedly “living happily with the atheist religion!” God’s Word makes it clear that one is either “for” or “against” Christ—there is no neutral position. One either walks in “light” or “darkness.”

Actually, true happiness can only be found in knowing Christ. These atheists may have found temporary pleasure in the world, but ultimately they’re going to spend an eternity in hell unless they repent and believe the gospel. For those who rebel against God, He gives them what they want—eternal separation from Him. But God is a God of mercy and love—He stepped into history to pay the penalty for sin and offers a free gift of salvation. God wants to save people from an eternity in hell. He wants us to live with Him for eternity.

Now, the assistant director for the Center for Inquiry–Michigan explained, “The point is to help people who aren’t religious know there is a community they can be a part of. The second purpose is to help people who don’t know a lot of nonreligious people dispel some of the stereotypes.” There has been a recent emphasis on showing atheists that they aren’t alone in their beliefs and on trying to demonstrate to Christians that atheists are happy, moral people. But as I said earlier, these aggressive atheists want to impose their atheist religion on people and the culture. That’s why they are usually the ones trying to get Christian symbols out of the culture or seeking to remove the Bible, prayer, and creation from public schools. They want students to be taught that the whole universe arose by natural processes—by naturalism. And you know what naturalism is? It’s atheism! It’s an anti-God religion.

In fact, another ongoing atheist billboard campaign put together by the Coalition for Reason recently put up billboards in the Bryan–College Station area of Texas. These read, “Don’t believe in God? You are not alone.”

Of course, because morality comes from the absolute authority that Scripture presents and because God has given us a conscience, unbelievers can (and many do) live moral lives (understanding this by and large means Christian morality). But that’s not what saves them from their sin. There’s only one way to salvation—through Jesus Christ, the God-man, who lived a perfect life, died on a Cross in our place, and rose again the third day.

And that’s what we at Answers in Genesis want to share with atheists everywhere through our new billboard and media campaign. You cannot be saved or experience true happiness through being “moral” (whatever that means to a person) or by being in community with fellow atheists. And you’re wrong when you say there’s no God. There certainly is a God—and He offers salvation freely to all who will believe:

Please pray for the “battle of billboards,” that God will use AiG’s latest public campaign to give many Christians the opportunity to challenge those who don’t believe and present the gospel to them. And pray that those who read the billboards will be challenged to think carefully about their worldview and then go to our website for more information and learn the truth of the Creator God—the truth that is written on their hearts and is crying out to them (Romans 1).

This blog post was written with the assistance of Steve Golden.