Today, a number of billboards with the following wording are appearing in San Francisco, California, and Times Square in downtown New York City:

“To All our Atheist Friends: Thank God You’re Wrong.” 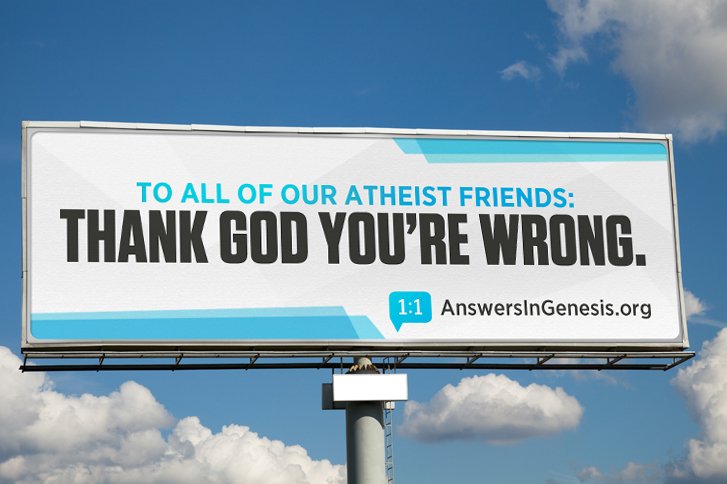 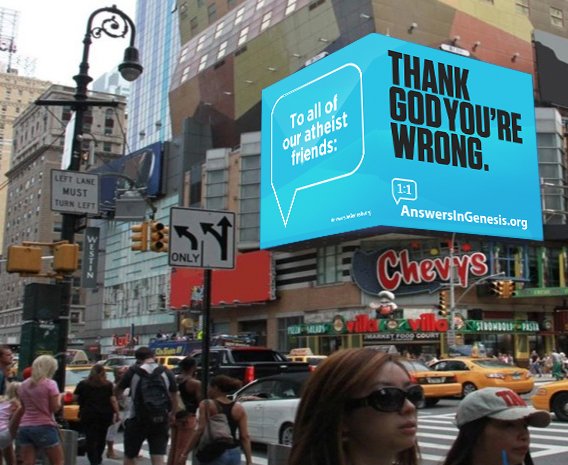 What is the purpose of such billboards?

Well, one reason is that we have noticed in recent times many atheists have become much more aggressive in promoting their religion. However, they have not just been promoting atheism, but in many ways they have attacked and denigrated Christianity—including through billboard campaigns. For instance, billboards like these have appeared in various places:

You can view photos of various other atheist billboards at this link.

In addition, this nation has seen an incredible attack on Christianity with lawsuits filed to have Christian symbols removed from the culture—so they can impose their religion of atheism on the culture.

At Answers in Genesis, we wanted to reach out to the atheists because we are burdened for the lost, and at the same time make a very public statement to the nation.

We decided on this billboard campaign that will last a month, with a cordial and engaging message: “To All Our Atheist Friends: Thank God You’re Wrong.” We trust this billboard campaign will give many of you an opportunity to witness to people—to proclaim the truth of God’s Word and the gospel. Here is why we chose the wording we did for the billboards:

I think of the verse that says, “if you confess with your mouth the Lord Jesus and believe in your heart that God has raised Him from the dead, you will be saved” (Romans 10:9).

I urge Christians to be bold for their faith. We all need to be more active and enthusiastic than the atheists—after all, we have the message of truth the world needs to hear.

One of the billboards (with animation) is on the massive digital billboard in Times Square, New York—it went live early this morning. Three billboards went up in the San Francisco Bay area this morning as well—at the popular Fisherman’s Wharf, the east end of the Bay Bridge, and near the Oakland Coliseum and A’s baseball park. Other billboards will go up in the Los Angeles area over the next two weeks—on Interstate 5, the 101 Freeway, Sunset Boulevard, and the Sunset Strip.

To read the press release that was sent out to Christian and secular media today, go to the lead article on the AiG website.

Also, our new web banner campaign on the AiG website will link people to an article written by my eldest son, Nathan. It answers some of the philosophical and theological arguments in regard to how we know there really is a God—the God of the Bible. You can read the article for yourself on AiG’s website.

If you would like to sponsor our billboard in your area, we can arrange for our marketing consultants of JDA to negotiate a rate for you and supply the artwork needed. Please contact JDA to request more information.

Previous Article He Made It! Next Article The Billboard Battle