From Arizona to the Middle East

Many of my recent thoughts about AiG’s various outreaches have been revolving around what is happening globally. This is not only because I am out of the country and in Australia to visit family (I also spoke in a Queensland church this past Sunday), but also because of so many AiG creation-gospel outreaches happening abroad.

For my blog post today, I am sharing an international report from AiG researcher, writer, and popular speaker Dr. Terry Mortenson. He starts with what recently happened in northern Arizona that eventually helped with the global outreach of AiG:

There have been several exciting recent developments in the worldwide spread of the truth of Genesis and the evidence in confirmation of that truth.

In July, I helped lead our sixth annual, by-invitation-only (and heavily scholarshipped) eight-day trip through Grand Canyon on the Colorado River. Participants included seminary and Christian college professors of Old Testament, theology, and apologetics and other key Christian leaders.

This year we had two men from England, one from Canada, and twenty from the United States. The trip was led by Canyon Ministries’ founder (Tom Vail), Dr. Bill Barrick (Old Testament professor at The Master’s Seminary), Dr. Andrew Snelling (geologist at AiG), and me.

One Old Testament professor on the trip this year regularly ministers to seminary students and Christian leaders in the Middle East. On this raft trip through the Grand Canyon, he was strengthened in his faith in Genesis and in his understanding of the scientific evidence that confirms Genesis and its account of the Flood. Since the trip I have been able to put him in touch with an Egyptian doctor in Scotland who is a strong AiG supporter and is translating and developing lots of creation resources in the Arabic language. Those two men hope to meet in the Middle East sometime to discuss ways that their ministries can complement each other in that part of the world. Also, this OT prof has recommended a key Middle Eastern theologian to attend the 2014 Grand Canyon trip, and that man is checking his schedule because he would very much like to come.

I first met the Egyptian doctor several years ago when he attended some training here at Answers in Genesis in Kentucky. In 2011 he invited me to speak in Scotland and Egypt. He and his contacts translated my PowerPoint slides into Arabic for my seven talks, and he was my interpreter as I spoke. He has since used those slides to help produce 26 programs on creation for satellite TV and the Internet, with a view to producing about 100 more programs. You can get a taste of the first-class quality of these Arabic programs in this YouTube video. The programs are aired at www.malakootsat.com. I just received word from the doctor that an Arabic-speaking person in the Middle East has already trusted in Christ as Savior and Lord because of the programs.

Here is the Arabic cover of Ken’s dinosaur book for children: 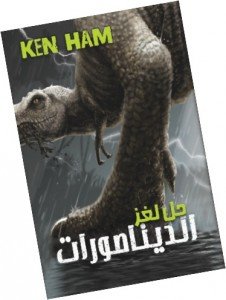 And here is the Arabic version of Ken’s evangelistic booklet on why God allows death and suffering: 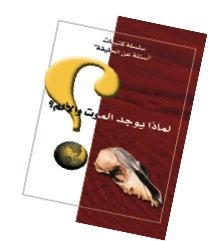 Another exciting development involves the massive country of China. Recently the Chinese Creation Science Association (CCSA, 中华创造科学协会) was launched because the teaching of evolution and millions of years is one of the biggest barriers to the gospel among Chinese people and undermines the faith of many Christians (just as such teaching is doing throughout the world). The CCSA is starting its efforts among the Chinese in North America, but the goal is to spread to mainland China as soon as possible. They are planning work in these areas:

1. Dissemination among the Chinese-speaking world of existing creation materials in Chinese or other languages via the website and other means.

4. Production of original creation materials in Chinese for lay and technical audiences.

We praise God for what He is doing to raise up gifted people to develop critically needed resources to expose the lie of evolution and millions of years and to proclaim the truth of Genesis, which is the foundation of the gospel (Genesis 3). In this way, millions of people who are living in spiritual darkness in the Middle East and in the Chinese part of the world can hear a compelling presentation of the gospel. Let us pray that through these many efforts thousands will trust in Christ and multitudes of Christians will be strengthen in their faith.

– Terry To schedule Terry as an excellent speaker on biblical apologetics, including for Sunday services (he is seminary educated), encourage your pastor to request an event on our website.