A skeptic recently wrote a review of the new video Evolution vs. God produced by Ray Comfort of Living Waters ministry. 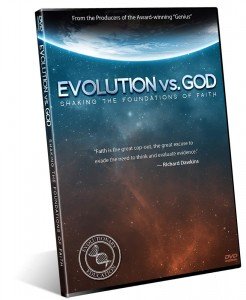 I call this review a “great” one—why? Well it’s mainly full of ad hominem arguments and basically giving the same “answers” most people actually gave in the movie! The evolutionists can’t logically defend their pagan religion that attempts to explain life without God, so they mock those who don’t believe and try to intimidate them by explaining why you wouldn’t see the evidence. They are so blind! All they can do is attack Christians and mock God and His Word. I am reminded of this verse of Scripture:

Whose minds the god of this age has blinded, who do not believe, lest the light of the gospel of the glory of Christ, who is the image of God, should shine on them. (2 Corinthians 4:4)

The entire review is available here, but be warned, there is some bad language.

Now, there is no need to be tortured by this typical anti-Christian rhetoric—it’s the same old, same old. It’s really the best these skeptics can do. Yes, they are blinded to the truth—but willingly so.

I have included sections from the review below. Read as much as you can to get a feel for this review.

Yes, it is a “great” review because it clearly illustrates that secularists can’t ultimately defend their anti-God position, and this should be encouraging to all of you to be more courageous in witnessing to them. The interesting thing is that the reviewer basically gives the same non-answers you hear in the movie! In a way, this review really summarizes how many scientists and students answered in the movie—except many of the secularists in the movie didn’t call Ray Comfort names and didn’t mock God and His Word as this reviewer does.

This review will make you want to obtain this powerful movie, as it really does sum up the best these skeptics can do. It will help you not be intimidated by these secularists as they make their bold claims about their evolutionary beliefs, and it will encourage you to get answers from Answers in Genesis and be more bold in challenging generations who have been led astray by the priests of evolution in the secular institutions where they have studied.

To obtain the Evolution vs. God video as a download or DVD, go to our online store.

I urge you to get multiple copies and begin handing them out to people so they too can see how secularists have indoctrinated people to believe in a bankrupt religion—and that’s what the idea of evolution and millions of years really is!

Here are excerpts from this “great” review; some of the language is rough:

Ray Comfort, the . . . proselytizer best known for his unwitting invention of the banana fallacy. . . .

It is astonishing to think that, of all people, Ray Comfort (now commonly known as Banana Man) has discovered . . . . How amazing that the Everest-like mountain of hard evidence for evolution might be razed to the ground in one brief 38-minute film by a man with only a high school education and a reputation for being, as Dawkins says, an idiot. . . .

Even the Pope’s on board with this one and believes that the process of evolution brought all life into existence, except human souls of course, which the Church believes are specially created by God—and who are we to argue with the claim that an insensible agent manufactures an insensible product? . . .

[T]his just confirms Ray’s boneheaded understanding that if we can’t observe it directly, it’s not science. . . .

Ray is preying on fresh-faced college students who are even more easily stumped by his irrelevant and misleading questions, most of which have nothing to do with evolution. That’s because, perhaps surprisingly, Ray Comfort doesn’t give a monkey’s uncle about evolution. He’s interested in using the word “evolution” without the meaning behind it and then promoting a cartoonish, slapstick, knock-off version, as in this highly amusing example taken from his blog. . . .

Here we see Ray’s preschool education paying off royally as he refuses to be taken in by such malarkey. Who in their right mind would believe that a mature female (we’ll call her Eve) just happened coincidentally to evolve at precisely the same time as the male (we’ll call him Adam) in order to keep the species going? This kooky vision in which distinct species arise one at a time, rather than emerging from breeding groups that eventually diverge, is a preposterous one, as Ray has cleverly deduced. . . .

[N]o, people choose to espouse evolution wilfully [sic] in order to kick that Giant Celestial Funsucker out of the equation (even though they know in their hearts He’s real), thereby temporarily relieving the need to be accountable to Almighty Him. . . . That’s why Ray’s knickers are in a twist. . . .

Ray Comfort is possibly the best example ever of the phenomenon Michael Shermer describes in his book The Believing Brain—that a person arrives at a belief first and only then (in Ray’s case in particular) bumbles about looking for all the evidence to back it up, no matter how nutty the belief may be. . . .

Ray’s cognitive style includes a childlike trust in authority, an intolerance of ambiguity, a tendency to be convinced by easy answers and suspicious of answers that are complicated, an inability to draw a straight line from cause to effect, and binary thinking on a truly grand scale. . . .

And speaking of imagination, I conclude by envisaging an alternate account of the creation story in the book of Genesis. Suppose for a moment that the Bible said something like this:

Genesis 1. In the beginning was a BANG, and lo it was big, and it was called the Big Bang. And all things proceedeth out of the mouth of the bang, except the Lord thy God, who awoke saying, “Whence cometh that bang?”; and the wife of God answered, saying, “What bang? …  And the Lord rolleth over and snoreth much, so that the drapes wafteth in the breeze and the dresser drawers goeth in and out. And the Lord thy God sleepeth heavily through the ages with many zzzees shooting from His lips, while the stars formeth in the heavens, and life evolveth on the Earth; from the creeping things, to the flying things, to the typing things. And yet God slept, waking only once to flood the Earth, which was better than the night before when God had gotten up at least five times.

2. And when God awoke He looked upon the Earth and shaketh His head, saying, “Intelligent design, my ----.” And the Lord flew down to Earth and asketh Mankind, “What giveth thou the idea that the Lord thy God had anything to do with this giant turd?” And Mankind did point to a book, saying, “But thou said—”; and God picketh up the book and swatteth Mankind over the head, saying, “Thou callest this journalism? I never said any of this stuff!” And Mankind did scuff its foot, and mutter “Aw shucks,” and stare embarrassed at the ground.

3. And the evening and the morning was the first day. If that was the Biblical account, Banana Ray would be the captain of Team Evolution and his latest film would have been called Evolution vs. Satan—but, no luck. We’re stuck with the Bible as written with its damaging origin myth, which not only gets evolution wrong but, worse still, imagines women created as an afterthought out of a rib, thereby giving the nod to several thousand years of sexism, patriarchy, and its inherent abuse. And we’re also stuck with God’s representative on Earth, Ray Comfort, who believes that creationism is scientific because it can be observed (every animal bringing forth after its own kind) and therefore doesn’t require faith—but that evolution is unscientific because it can’t be observed (at least, he can’t see it) and is therefore the faith-based stance. It’s a hopelessly twisted position, born of ignorance, inflamed by fear, and perpetuated by a man so clueless, he thinks his pathetic, wandering argument is actually significant. It’s silly, it’s virulent and, most unfortunately, it’s dangerous. In fact—you might even call it bananas. Sorry—but that’s a few minutes of your life you won’t get back! But what a “great” review to encourage you to be bold for your faith. Get the Evolution vs. God DVD, and start handing it out everywhere you can.

Also today on the front page of the AiG website, we have launched a new feature article titled “Evolution vs. God: Who’s Winning?” Resources like Evolution vs. God are an excellent starting place for training up your family in sound biblical apologetics, so that they will be prepared to give an answer to those who question their faith in the authority of the Word of God.

Previous Article A Boon to Boone County! Next Article A Word of Caution