We are taught in Genesis 2:15 (“Then the Lord God took the man and put him in the Garden of Eden to tend and keep it”) and Genesis 1:28 that we are to be stewards of God’s created world. We have many web articles on this topic (e.g., see Go (Truly) Green—by Starting with Genesis). Therefore, we found it to be a nice touch when we learned that a local group had “adopted” a highway near our Creation Museum and would be cleaning it up from time to time. 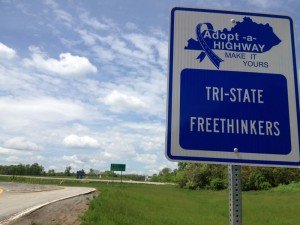 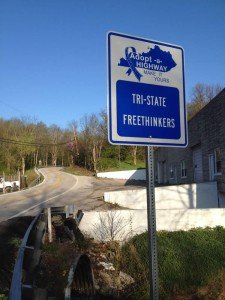 Yes, as you can tell from the photos of two of the “Adopt-a-Highway” signs, a secularist group (which opposes the museum’s biblical messages) is adopting roads near the museum. Of course, we appreciate the group’s effort to tidy up the area. Over the next few months, tens of thousands of people will be visiting the Creation Museum, and through the efforts of this group and regular highway crews, guests to our museum will now see an even more attractive area.

At the same time, and though we are appreciative of any volunteer who helps out in the community in ways like this, we note two things. Obviously, these Freethinkers are, in their own way, trying to counter our message of biblical authority. One of the local Freethinker leaders has written that it is his hope that people passing by will note the Freethinkers’ “presence in the area,” as he wrote.

Second, and in something of an irony, I am aware that this local Freethinkers group is not just anti-Christian (even as they agree with us about being good stewards of the environment), but it is atheistic. As I reviewed some of their beliefs, I noticed some close-mindedness with them. They are not truly freethinking as the name suggest. Most secular activists are attempting to remove any vestige of Christian thinking in our public institutions and even go after private institutions like AiG and the Creation Museum (see this previous blog post, for example). And some of them will attack other private institutions, using horrible profanity and threats, like those received at this South Carolina Christian school recently.

But the more we have been attacked, the more God has blessed AiG and the museum. It makes me recall the verse Genesis 50:20:

“But as for you, you meant evil against me; but God meant it for good, in order to bring it about as it is this day, to save many people alive.”

Here is what a Freethinker is, according to an online dictionary: “a person who forms opinions on the basis of reason, independent of authority or tradition, especially a person whose religious opinions differ from established belief” (emphasis mine). All this means is that they are not really “Freethinkers,” of course!

As these secularist volunteers work in our community (for a good cause), we trust that they will rethink what a freethinker truly is. Why shouldn’t students, for example, be told about the evidence against evolution in public schools, if “freethinking” is the secularists’ core belief? Why do almost all natural history museums present evolution without question? In fact, the evolutionary belief system dominates our various establishments in America, and so much so, that the Freethinkers’ desire to challenge “established” thinking is actually redundant! They already represent the established thinking in most institutions of society!

For our part, we would be willing to meet with these local Freethinkers and chat with them. Let’s establish a dialogue and have a free exchange of ideas.

So even though they have selected to “Adopt-a-Highway” for cleanup near the Creation Museum and may not have all the right motives, we look forward to having clean roads around the Creation Museum as the summer crowds pour in beginning Memorial Day weekend. More than ever, we will do what we can to teach thousands of people at the Creation Museum to be equipped to answer the empty arguments of these people who are not really “Freethinkers” but are bound spiritually by the one the Bible calls the father of lies (John 8:44).

Previous Article Take a Creation Guide with You on Summer Vacation! Next Article Spectacular “Dragon Invasion” to Impact the Nation