The Bee Is Over

Each year AiG is pleased to promote the National Bible Bee competition for young people and also to have representation at its annual meeting. See www.BibleBee.org. The Bee is set up to help parents disciple their children through an in-depth study of the Bible which includes Scripture memorization.

Roger Peterson of our staff has had his children participate in these Bees. He has also manned an exhibit on behalf of AiG and the Creation Museum and distributed AiG awards to the winning children.

Three hundred students and their families from across the country were in Sevierville, Tennessee, last week for the National Bible Bee contest. These students have been working hard since the beginning of the summer to memorize hundreds of Bible verses, and they have been studying the books of First and Second Timothy. Divided into three different age divisions, the students were judged based on their ability to recite the passages, and they were tested on their knowledge of Scripture.

The winners of the three categories received some very special awards from AiG (including a Creation Museum five-year membership), and every competitor got a coupon for a significant discount to visit the Creation Museum. 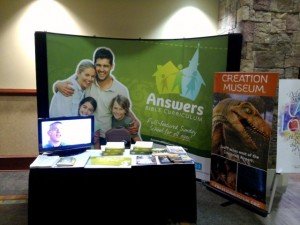 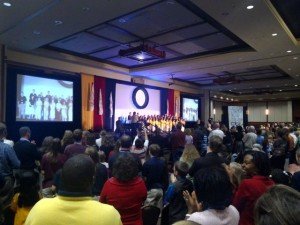 Here is what Roger sent me about the just-concluded Bee.

Our family has been in Sevierville, TN serving the families at The National Bible Bee for several days. Becky and I served as judges for the preliminary oral rounds on Thursday, and our children are serving in the family fun area. The children at the Bee recited up to 20 passages in 10 minutes and then took a written test based on their study of the books of First and Second Timothy and general Bible knowledge.

Thursday night at the opening ceremony, the top 15 in each age category were announced, and they moved on to the semifinals on Friday. The finals were Saturday, when the top 5 in each age competed for the top prizes. All of these events were webcast at www.biblebee.org/webcast.

Saturday morning, I presented the awards on your behalf to the top five primary contestants. They received the books you signed for them, and the top 3 in each category received five-year memberships to the Creation Museum, as well as prizes from other sponsors and some very substantial monetary prizes.

It was such a joy to see so many families here who are training up their children in the truths of God’s Word. I have been able to share AiG’s Answers Bihle Curriculum with lots of people, and they are all excited to take the information back to their churches. Several families are also considering using ABC as a homeschool curriculum. (Becky uses it as the Bible curriculum for our youngest child.).

Many people have told us how much they have enjoyed visiting the museum and many are planning on stopping by on their way home.

By the way, a 2011 Bee winner who lives in the Pacific Northwest flew with her family to visit the museum earlier this year (2,000 miles away) to take advantage of her Creation Museum awards—see my blog post about this family’s visit.