Many times over the years, I have warned parents about using pictures of what we call “bathtub arks” with their children. Such pictures, usually with giraffes sticking out the top in a small unrealistic boat overloaded with animals, are sadly the norm in many Christian children’s books that deal with the topic of Noah and the Ark.

I have warned parents that such pictures are “cute but dangerous.” Why?

The secularists do all they can to mock God’s Word and in an effort to capture the hearts and minds of children so they will not believe the Bible and its saving message of the gospel. The secularists accuse Christians of believing fairy tales if they accept the Genesis account of Creation, Fall, and Flood as written—as true historical records. And really, when we allow children to think Noah’s Ark looked like one of these “bathtub Arks,” we are reinforcing the false idea that the account of the Ark was just a fairy tale.

Over the years, I’ve found many churches have “bathtub arks” depicted on the walls of their kindergarten area, in their children’s Sunday school classrooms, etc. In my writings, I plead with leaders in the church to remove these—what I consider to be dangerous to the spiritual well-being of children.

Well, once again I groaned when I saw that a Christian publisher in the United Kingdom (where I have just been speaking for 10 days) had sent out posters of “bathtub arks” to churches using their children’s teaching material. Here is a photo of the poster from one of the UK churches I visited: 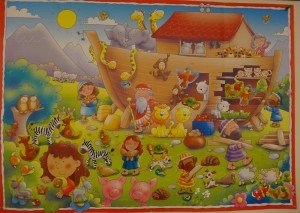 We need instead to show children that Noah’s Ark was a real ship—a great ship—with plenty of room to fit the land animal kinds, and seaworthy to survive a global Flood. That’s why at Answers in Genesis and in our materials, we show Noah’s Ark according to the dimensions in the Bible and as a real seaworthy ship:

Let’s make an effort to “sink” the “bathtub arks” and make sure we use it as an illustration of a real ship of biblical dimensions.

Thanks for stopping by and thanks for praying, including for our Ark Encounter project.

Previous Article A Giant Distortion Next Article Reflecting on the UK