Note: I posted an item about this controversy in Northern Island on my Facebook page, but thought I would write a blog post as well and include more photographs concerning the nation’s famed Giant’s Causeway.

While in Northern Ireland on my speaking tour, we visited the National Trust’s new visitor center at the popular Giant’s Causeway geological feature.

Many of you may recall that this new visitor center received headline news recently (not just in the UK but also other countries such as the USA). The secularists (including intolerant atheist Richard Dawkins) were up in arms because they claimed the biblical creationist position was represented at this center, which offers commentary on the the basalt columns known as the Giant’s Causeway.

Because the secularists were so upset and made such a public uproar about this, I wanted to see the exhibit for myself.

Well, the exhibit clearly presents the origin of the Giant’s Causeway in terms of millions of years. In fact, there are quite a number of signs in different parts of the exhibition that are teaching parents and children the classic billions-of-years geologic evolutionary view of history. 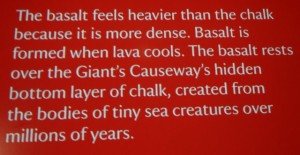 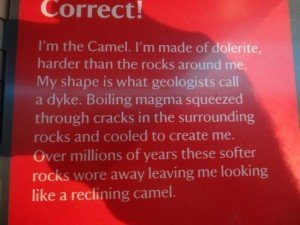 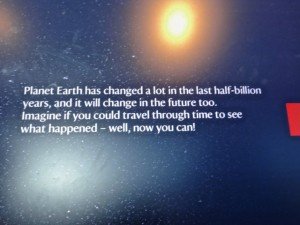 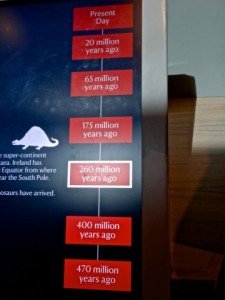 And one of the big features in the exhibit is a massive screen where an animated feature presents the old legend of how a giant built the causeway. Of course, they do this to sell lots of products with drawings of the giants—t-shirts, etc. 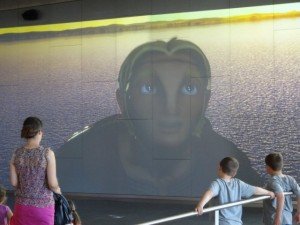 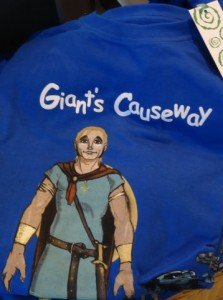 On one of the signs, there are “stories” presented concerning the origin of the Giant’s Causeway. 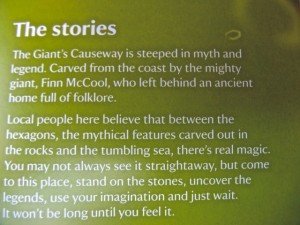 So where is the biblical creation view represented—the one that caused such a massive uproar around the UK? Well, if you happen to press the right button at one of the exhibits I watched, you will hear an audio presentation about the debate on the origin of the Causeway, and the presenter makes reference to biblical creationists believing that the earth is only thousands of years old. (But most people didn’t even press the button, as there are a number of other buttons to press in this part of the exhibit.) And there is a hit against the creationists even in this audio, as it clearly implies that to accept mainstream science is to accept millions of years. Thus creationists are seen as outside of mainstream science. Here is a photograph of the exhibit where, when one of these buttons is pressed, you will heard the audio mentioning creationists. 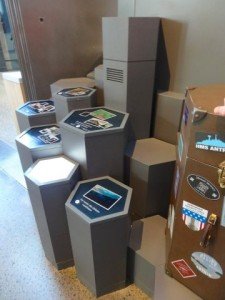 What is interesting to me is that the secularists don’t mind the fact that the legend of the giants is featured. However, a tiny mention about biblical creationists in just one of the audio presentations about the debate over how the causeway formed, and they go ballistic.

The secularists (like Richard Dawkins and his followers) have totally misrepresented the situation at this visitor center. The biblical creationist view is not presented as a scientific alternative. It is in fact attacked—the center completely presents the origin of the Causeway in terms of classic evolutionary geologic history over millions of years and calls it “science.” 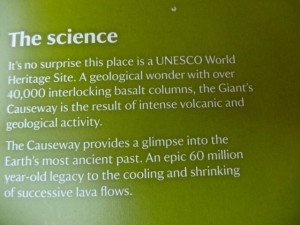 I would say that even if the Causeway featured the biblical view of the Flood and young earth as a legend or myth, instead of featuring the giant’s legend as they have, the secularists would go ballistic. They don’t want any mention of anything to do with the Bible or Christianity at the center. They are totally intolerant of anything Christian.

This really exhibits just how anti-Christian their behavior is. And this is just another example illustrating that when secularists often make claims about legislation or court cases that in some way involves the issue of origins, one can’t typically believe what they say. Usually, after checking things out, one will find they have grossly distorted the matter.

So there are two giant distortions in regard to the Giant’s Causeway: