I recently blogged (part one and part two) about the content of a free online homeschool curriculum offered by Washington State University. The curriculum teaches evolutionary biology. It not only uses refuted evidences in an attempt to make its case, but it also directly attacks biblical creation. In the final part of this review series, I want to have a look at the board game the writers created, called “Evolutionary Pathways: A Game of Evolution.”

Students playing the game start at the spot marked “The Origin: Start Evolving Here.” Using “bricks” (e.g., Legos or some other available game markers) to represent a starting population, students progress through the game and try to survive catastrophes and “Extinction” squares. Students may draw “Chance” and “Advance” cards, which give various benefits and disadvantages to their populations. The game is over when a player’s population “Achieve[s] Adaptive Success.” 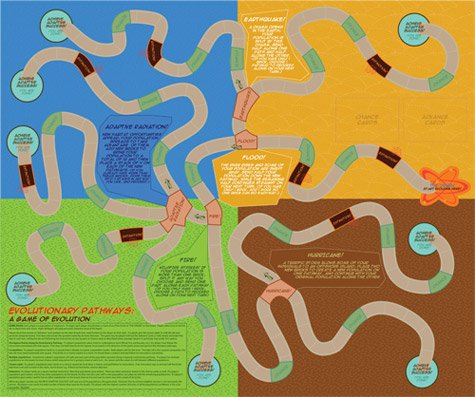 The game is founded on the assumption that evolutionary ideas are fact. The game does not really teach or explain the idea of evolution. Instead, students must assume it is true and answer questions and make decisions based on an evolutionary worldview. This is not surprising, as the secular world teaches students in public schools and the media that evolution is fact!

For example, one of the “Advance” cards asks the player to define a “mutation.” The definition is simply, “A change in the genetic makeup, or DNA, of an organism.” In the “Chance” stack, the player may draw a card that says, “Beneficial mutation!” This card allows their population to double. There is no discussion of the lack of scientific evidence for alleged “beneficial” mutations; students are simply led to believe that these kinds of mutations are possible and are of great benefit to any population!

The “Advance” cards ask players to “give an example of an adaptation to living in the ocean” (other cards ask for examples regarding flight, living in the desert, avoiding predators, etc.). Possible answers include “swimming, tolerating salt, having gills or blowholes, baleen (for filtering plankton),” and so on. Once again, students are expected to assume that evolutionary ideas are fact and that animals had to slowly develop these characteristics over time.

What does the Bible say about this? Genesis 1:21 states, “So God created great sea creatures and every living thing that moves, with which the waters abounded, according to their kind, and every winged bird according to its kind.” The sea creatures were created already having the characteristics that allow them to survive in the water. They did not have to wait until they developed an “adaptation” for swimming—animals were created according to their kinds. And of course, such an account of the origin of the sea creatures is the only one that does make sense. They were all designed to do what they do!

Students may also draw a card that asks them, “How old (about) is Earth?” The answer? 4.6 billion years. The billions of years age is assumed to be true and obviously goes against what the Genesis account of creation teaches.

You see, if we look at the fossil record from the perspective of God’s Word, we find that the layers of sediment and fossils are largely a result of the global Flood of Noah’s time, and the deeper sediments, in most instances, would be the ones first deposited. (For more information on fossils and the Flood, read Dr. Andrew Snelling’s article, “All the World’s a Graveyard.”

And, of course, as I mentioned in my first post on WSU’s curriculum, students are asked in this game about alleged “transitional forms,” Archaeopteryx and Tiktaalik. “What do fossils like Tiktaalik and Archaeopteryx tell us about evolution?” The answer: “These fossils are transitional forms—that is, they show features of both older and younger species—and they support the idea that organisms evolve through various stages over time.” But these supposed transitional forms have been thoroughly refuted! (See “Did Dinosaurs Turn into Birds?” and “Tiktaalik and the Fishy Story of Walking Fish.”)

Once again, the curriculum writers are attempting to indoctrinate homeschool students into a false view using debunked “evidences.”

All the above examples and the examples in my other two posts on this homeschool curriculum demonstrate the kind of indoctrination that secularists attempt on our children.

We must be aware of what is being taught in such curricula, so that we can prepare our children to recognize the error that pervades this particular curriculum. Thus they will be able to be a witness to those who will be indoctrinated by the brainwashing in evolution.

We must raise the next generation on the foundation built on the Word of God, with no uncertainty about its trustworthiness. As parents, we need to teach authoritatively that the answers to the earth’s origins and history are in the Word of God, which makes sense of what we find in the world, and not in man’s fallible opinions. And we need to equip the next generation with answers—lots of answers—so they will be able to stand boldly on the truth of God’s Word and proclaim the gospel and contend for the faith.

Read part one and part two.