Recently, I posted the first part of a series of blog posts (part three later this week) reviewing the online evolutionary biology curriculum Washington State University (WSU) has created for homeschool families. I believe it’s important to sound a warning to homeschool families about curricula that teach evolutionary beliefs as though they are fact. This curriculum is not only freely available, but it also uses interactive online games to teach children evolutionary ideas. In this part of the review, I want to address the curriculum writers’ treatment of adaptation and mutations.

WSU’s evolutionary indoctrination curriculum for children begins dealing with adaptations in the preschool–Kindergarten level (calling it “variation”) and gets progressively more in-depth at each grade level group. Remember, we see genetic variation exhibited in animals all over the world—but such variation is generally associated with redistribution of information and new combinations of previously existing information as well as a loss of genetic information. There is no new information gain in the genes within a population. For example, if the weather grows cold, a population of dogs with genetic information only for short hair will not produce offspring with long hair. Dogs with the genetic information for long hair must be introduced into the population and must breed with the short-haired dogs if the long-haired trait is to appear. Without that, the short-haired dogs will likely not survive as well in the cold and the population may become extinct given enough time. (For more on this, read Roger Patterson’s article on natural selection.)

But the curriculum eases students into the idea of upward evolution (implying information gain) by first defining adaptation as “ways living things can change themselves or their behavior to meet the needs of a changing environment.” Using examples such as animals hibernating in the winter or people wearing different kinds of clothing in different weather (grades 1–3), the curriculum writers set out to show that everyone and everything can adapt. And who would disagree with this? Of course, humans can handle varying types of weather and, of course, bears hibernate. None of those examples demonstrates a gain in new genetic material.  The analogies they use are not correct—but unsuspecting students most likely would not see that.

The lesson for the first through third grade level closes by saying, “If the climate in an area changes to become gradually more humid and warm, this may cause the growth of new and different plants, which in turn may encourage animals to eat differently. Also, the animals may, over time, develop thinner fur or less fatty bodies” (emphasis theirs). Basically, for the evolutionist, it all comes down to time. Given enough time, states the WSU curriculum, these animals will simply develop new genetic material—even though that’s not how genetics works! Remember, a mutation—even one somewhat advantageous in a specific situation—represents a loss, not a gain of genetic information.  Students are being indoctrinated in a false view as teachers manipulate them to think in a particular way—yet the students do not understand that this curriculum wants them to believe in evolution, so they are being manipulated to believe something that is false.

In grades 4–5, students learn about the many species of fox. The “Extensions” section poses the question, “What do you think might happen to Arctic foxes if Arctic habitats were to get warmer, have less snow and ice, and have longer summers?” The answer is not provided, but based on the prior definition of adaptation, we can guess what answer is expected—something like: the Arctic foxes will change to meet the needs of their new environment. In other words, students are expected to infer that the foxes will adapt to the warmer environment by gaining new genetic information not already present in their population in order to meet their environmental challenges.  And this implies that such changes over millions of years lead to evolution of one kind to another.

The adaptation lesson for grades 6–8 continues teaching similar material, but to make matters worse, the writers direct students to an interactive game on the Discovery Channel’s website. The game, called “The Survival Game,” asks students to select a very diverse population of creatures (because, as Darwin tells students, “diversity can ensure survival against even the harshest elements”) and then attempt to keep them alive for one million years.

In the course of the game, students are given two chances to introduce “beneficial” mutations into the population to help them cope with the elements, predators, and foraging. What’s the problem? As Dr. Georgia Purdom of our staff explains, while very rarely there are mutations that have “beneficial outcomes in restricted environments,” we have no evidence of truly beneficial mutations (for more, see Dr. Purdom’s article). And yet, students are clearly being taught in this game that mutations can in fact be extremely beneficial to a population, ensuring its long-term survival. 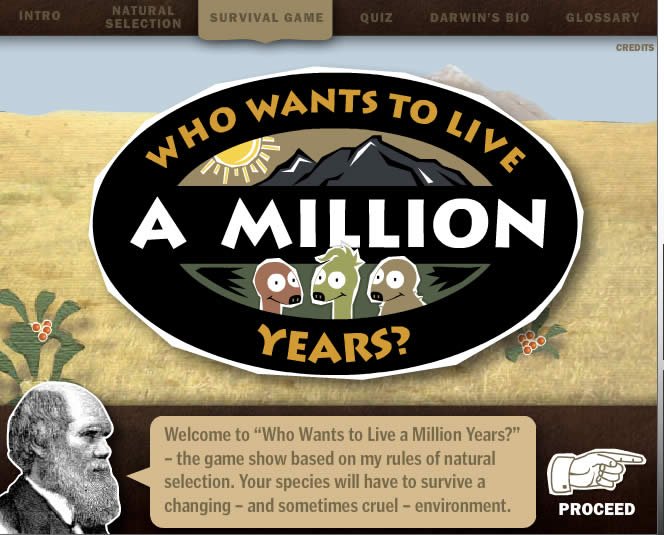 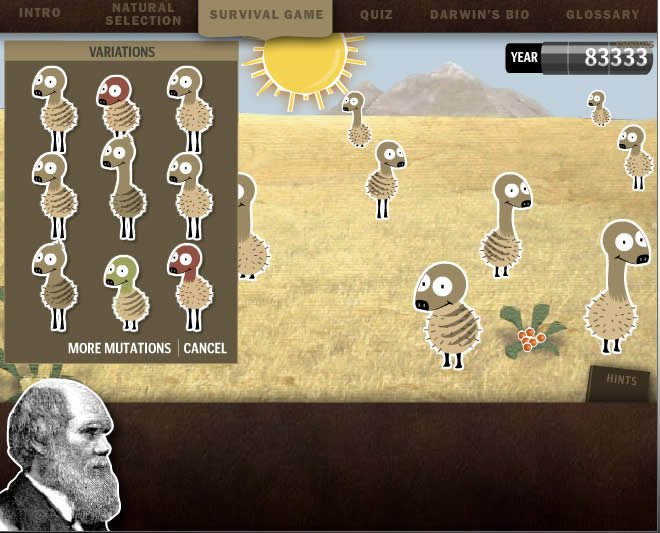 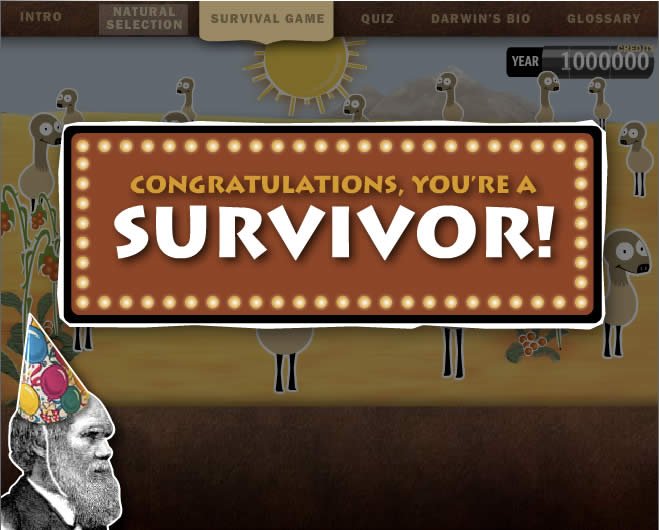 From God’s Word, we know that all the variations among animal kinds we see today have developed within the original kinds of animals that left Noah’s Ark after the Flood. Animals do change over time—often a very short time—through a reshuffling of the various options available in their genetic material. Even when mutations occur and add to the variability, they do not increase the genetic information so as to provide the raw material to produce new kinds of animals as evolutionists claim. And even when mutations provide an advantage within a specific setting, a population in which there has been a loss of genetic material will ultimately have fewer “options” for variation available to meet future challenges. Thus, even if a mutation becomes prominent in a population and provides a short-term advantage, there is an overall loss of information. And in no case does any mutation provide the information to become—to evolve into—a new kind of organism. Dogs in a population may very in hair length, but they never become non-dogs! It therefore is not the gain of new genetic information over time that helps animals survive.

Teaching students otherwise is simply indoctrinating them into a false view. Dr. Elizabeth Mitchell, a medical doctor who authors our News to Note column each week, has fifteen years’ homeschooling experience from kindergarten through high school. She warns of the subtle danger inherent in this process. “Like heating the proverbial frog slowly in a pot, using observable phenomena like adaptation, variation, speciation, and mutation to support the idea that upward evolution is the process that gave us the animals we see today is a subtle way to misinterpret facts in barely perceptible increments until children are indoctrinated to accept scientifically unverifiable, experimentally insupportable, biblically contradictory concepts as fact.”

As the biblical creation movement continues to make a significant impact on the church and culture, it is interesting to note the increasing number of books and curricula from secularists that attempt to indoctrinate children in evolution and millions of years and against the Bible's true account of origins.

(Thanks to AiG researcher Steve Golden for his diligent research in assembling this information.)

Previous Article Creation Apologetics in the Philippines Next Article Refreshing News from Northern Ireland: But Would Secularists in the USA Be This Tolerant?