A Tale of Two Museums

This is exciting. Each year, and traveling over 1,500 miles round trip, Grace Church in Eden Prairie (near Minneapolis), Minnesota, brings its freshman class to our Creation Museum where they learn to defend the Genesis account and also to think correctly about science (e.g., the difference between observational science and historical science). Then the teachers and pastors take them to the Field Museum in Chicago on the way home. This is the report they sent me about their visit to these two very different museums. This report will encourage you, and I also pray it will stimulate other churches and Christian schools to consider doing something similar. The leaders of this group have also developed a study guide to be used by the students to help them as they go through the secular, evolution-filled Chicago Field Museum. Here is the report:

We are writing to tell you of our Freshman Foundations trip to both the Creation Museum and the Chicago Field Museum on June 11 - 15. It was an impactful trip for our students and one that has shaped their worldview and strengthened their faith. Thank you for taking the time to meet with us twice while we visited the Creation Museum. It was helpful to get your insights and it meant a lot to us and the students – especially after hearing you speak at our church in April! … 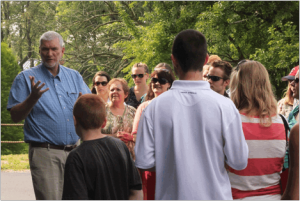 Speaking to our group at the Creation Museum.

We desired to create a basis by which these students could understand and articulate the need for a Biblical worldview. It is for this reason that we started our trip by spending a day at the Creation Museum. Our students left with a very important understanding that if you neglect to use God's authoritative Word as the source of truth, then you are left with human reasoning and that will cause you to miss the mark completely. This lesson proved to be invaluable for what we would experience later on the trip. Our students were equipped, challenged and encouraged by our time at the Creation Museum.

Going to the Field Museum two days after the Creation Museum was quite a contrast. This year, we decided to try a guided tour through the “Evolving Planet” with groups of 10 – 15 students which proved to be helpful. This tour was led by one of our teachers, Shyla Allard, and the students filled out their booklet (you have a copy) with questions about the exhibit as they went. They were also asked to record in their booklets instances of observational science and historical science found throughout the exhibit. The booklet and guided tour helped to contrast the conflicting worldviews, provided scientific information that supports the Biblical worldview and encouraged students to think critically about what they observe. The goal was to help them to stand firm in what they know to be truth from God’s Word. 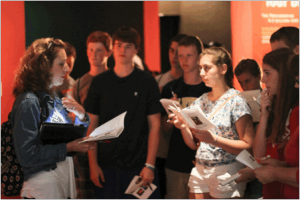 Students used our booklet to contrast the exhibit with their Biblical worldview.

There were several “ah ha” moments for the students as they studied the claims in the “Evolving Planet.” Here are some of the highlights.

The exhibit begins by laying the foundation of billions and millions of years. One of the first placards also claims that life (organic compounds) may have come from extraterrestrial sources. Many students noted believing in that idea takes a lot more faith than believing the Bible.

One of the favorite stops in the “Evolving Planet” was the video and display on radio isotope dating of rocks. The students learned about the evolutionary assumptions made (using historical science) when scientists date rocks. Students were also struck by the extremely large ranges of dates given for the rocks on display with some of the ranges being billions of years. Someone noted they would never be allowed to be that imprecise on one of their math tests. 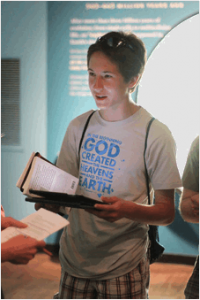 You don't see many of these t-shirts in the "Evolving Planet" exhibit.

There were many points in the exhibit where our students could see the effects of a worldwide global flood. This was especially true in the many fossil displays and in a video on “how to make a fossil.” Students were especially amused by a sign that read, “Scientists aren’t sure what trigged a mass extinction that killed almost all animal life on earth,” knowing that we have a record of what happened and why in the Bible." 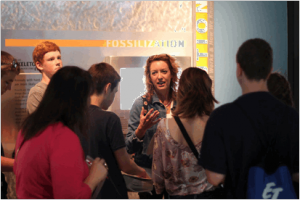 Here we are at the "How to Make a Fossil" station. Two words come to mind – Global Flood.

The largest area of the Evolving Planet exhibit is the dinosaur fossil display. We read out loud the Job 40 description of the behemoth at the Sauropod display and noted that even the Field Museum exhibit admitted these dinosaurs seemed uniquely engineered for size (contrary to random chance). 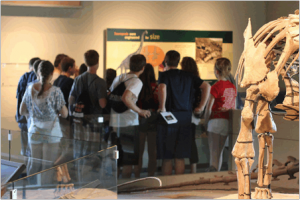 The most striking contrast between the Creation Museum and the Field Museum was the Lucy exhibit. In the Field Museum’s human evolution display, students were able to get a poignant example of how worldview and historical evidence can shape the evidence.

The students were most struck by how, in the Field Museum, Lucy was made to stand upright and her face, hands and feet were made to look very human. They could easily see the creative license taken since the hands and feet were not found among the bones and so little of the skull exists as well. They appreciated seeing the Creation Museum Lucy exhibit first to help them understand how to look critically at the evidence and interpret it from a Biblical standpoint. 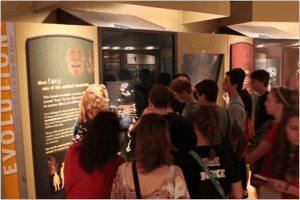 Despite a very long and exhausting day at the Field Museum, the most rewarding part of the day for the leaders was the evening debrief. After dinner, the group took time to review what they learned and share the answers they recorded in their booklets. What they shared clearly indicated the depth of their understanding and how the Spirit of God was at work among them. Although we expected a short debrief so they could quickly adjourn to their pool and social time in the hotel, the hands kept going up to share their thoughts on what they’d learned. Some students even stayed after the debrief to continue to ask questions. 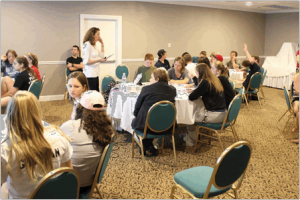 Students at the debrief session

There was no doubt these freshman students were impacted by this trip and they are better equipped to defend the authority of God’s Word. For this, we praise the Lord and give Him all the glory! Pastor Jason Barthelemy Senior High Pastor Grace Church, Eden Prairie (http://www.atgrace.com/) 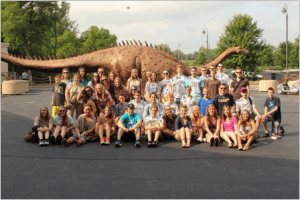 What a blessing to receive this report. This is just another example of how the Creation Museum and AiG ministry are impacting this generation of young people to be able to contend for the faith.