I couldn’t help but say “Wow!” when I read about the “Wow!” signal as reported on a Fox News article yesterday. The report stated the following:

If there's something you'd like to say to aliens, now's your chance. The Wow! signal, a mysterious radio transmission detected in 1977 that may or may not have come from extraterrestrials, is finally getting a response from humanity. Anyone can contribute his or her two cents — or 140 characters, to be exact — to the cosmic reply via Twitter.

All tweets composed between 8 p.m. EDT Friday (June 29) and 3 a.m. EDT Saturday (June 30) tagged with the hashtag #ChasingUFOs will be rolled into a single message, according to the National Geographic Channel, which is timing the Twitter event to coincide with the premiere of the channel's new series, "Chasing UFOs." Then on Aug. 15, exactly 35 years after the Wow! signal was detected, humanity's crowdsourced message will be beamed into space in the direction from which the perplexing signal originated. Now look at the scan of the original computer printout from 1977 showing the supposed evidence of aliens in outer space: 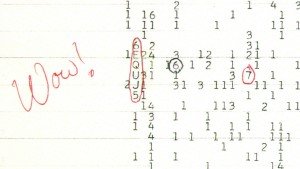 Wow! Certain people look at these few numbers and letters, and they see it as evidence of an alien intelligence. However, those same people would look at the most complicated information system and language system on earth—the DNA molecules—and they immediately think of how it arose by chance! These people look at a few letters and numbers and think of an alien intelligence, yet they look at the Bible with its detailed record of origins and scoff at any suggestion of an intelligence behind the Bible! These people would rather believe in unseen aliens because of a few letters and numbers, but they refuse to believe in a Creator God when it is obvious from what is observed in life and the universe that there is a Creator. They would rather believe in aliens and scoff at a Creator God when the laws of logic, laws of nature, and uniformity of nature cry out there is a God!

I could only think of this verse: “The fool has said in his heart, ‘There is no God.’ They are corrupt, They have done abominable works, There is none who does good” (Psalm 14:1; emphasis added).

Read more from the Fox News article at this link.

Previous Article Using the Bible and AiG to “Bring Him Back”! Next Article A Tale of Two Museums