What’s the Least You Can Believe?

We are seeing a plethora of books and other resources permeating the church these days that advocate compromising God’s Word in Genesis, on hell, “gay marriage,” abortion, and salvation. I thought it would be important to bring this particular new book to your attention. I asked AiG researcher Steve Golden to write a report for me, which I have reprinted below.

I believe it’s important to make the church as a whole aware of materials being written by professing Christians that compromise the authority of the Word of God. This latest publication seeks to help Christians reconcile Scripture with controversial issues such as the idea of evolution, homosexual behavior, and salvation in other religions. The very title says a lot about the book’s message! Written by a pastor, this book is another example of how even the church is at fault for the attack on the authority of God’s Word.

Martin Thielen, the senior pastor of Brentwood United Methodist Church in Brentwood, Tennessee, has written a new book titled What’s the Least I Can Believe and Still Be a Christian? Pastor Thielen says in the preface that he will list 10 things Christians do not need to believe (what he calls “closed-minded faith”) and then 10 things Christians do need to believe, which he summarizes, “They need to believe in Jesus—his life, teachings, example, death, and resurrection.” Pastor Thielen encourages churches to use his book for small group Bible studies, and indeed there are some churches doing just that. He’s even made the study leader’s guide available online. 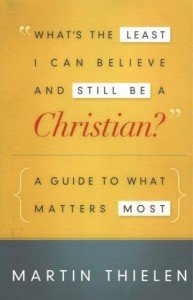 Pastor Thielen hits on creationism early in his book, writing that while he respects creationists, creationism “has scientific problems. It denies virtually every branch of science” (p. 16). He continues, “Not only does this literalist approach have scientific problems; it also has biblical problems. Contrary to what this view teaches, the Bible is not a science book” (p. 16). Pastor Thielen’s bottom line? “Theistic evolution is a perfectly acceptable Christian belief” (p. 18). He even states his own position:

While we at Answers in Genesis acknowledge that one’s view on the origin of man is not a salvation issue, we do say that it is an authority issue. Believing in theistic evolution as a Christian means you reject the authority of God’s Word, because the creation account in Genesis teaches a literal six-day creation (Genesis 1). Even the idea of “theistic evolution” is problematic, because evolutionary ideas were created to explain a world without God. If we approach Scripture  from the standpoint that it teaches absolute truth, then every branch of science must be interpreted in light of biblical teaching—not the other way around.

In dealing with homosexual behavior, Pastor Thielen takes a rather soft stance, writing the following:

The third major position concerning homosexuality, often found in the Christian center, can be summarized as welcoming but nonaffirming. This position is fully welcoming: all persons, including gays, are absolutely welcome into the church of Jesus Christ. However, this position is nonaffirming: it is not yet ready to affirm homosexual behavior. (p. 56)

Pastor Thielen goes on to say that his denomination, the United Methodist Church, takes this third position (p. 56). What’s the problem here? The Bible is not ambiguous on the issue of homosexual behavior. It isn’t that Christians are “not yet ready” to affirm homosexual behavior. Christians cannot affirm it if they are honoring the Bible as the final authority. Scripture is clear that homosexual behavior is sin. The following passages will help you understand this issue better: Genesis 2:18–25; Leviticus 18:22; Mark 10:6; Romans 1:26–27; 1 Corinthians 6:9–10; and 1 Timothy 1:9–10. I would also urge you to read Tim Chaffey’s article about how the Bible deals with homosexual behavior.

If there is any doubt about Pastor Thielen’s ambiguous position on homosexuality and his refusal to stand on biblical authority, the conclusion to the chapter cements it. “We’re still talking about it and debating it. We’re still studying it and praying about it. So maybe one day our position will change. But for now this is where most of us stand” (p. 58).

Pastor Thielen also broaches the issue of whether Muslims, Hindus, Buddhists, and people of other religions have salvation, or if salvation is found in Christ alone (Acts 4:12). He writes the following of the Scriptures that claim salvation in Christ alone:

At first glance it seems clear cut: if people don’t go through Jesus, they don’t get to God. However, from the beginning of Christianity, followers of Christ have debated how to interpret passages like this, which seem so exclusive of non-Christian religions. Some Christians interpret these passages as absolute, literal, doctrinal truth. Others interpret these passages not as absolute dogma but as poetic and devotional in nature. (p. 39)

Pastor Thielen follows up this debate, writing, “Many conservative believers hold strongly to the view that all non-Christian religions are false, and people who practice them have no hope of salvation. Thankfully, a third option exists. … People who hold this believe people of other faiths are following God to the best of their knowledge” (p. 41). This third option is Pastor Thielen’s position on salvation, and he summarizes it by writing that in the case of a non-Christian’s eternal destiny, “God can be trusted to do what’s right” (p. 43).

Creationism may not be a salvation issue, but faith in the Lord Jesus Christ absolutely is. Pastor Thielen challenges the very basis of the gospel message in his implication that those passages that teach salvation through Christ are merely “poetic.” Our statement of faith at Answers in Genesis is unashamedly clear on the issue of salvation.

Salvation is a gift received by faith alone in Christ alone and expressed in the individual’s repentance, recognition of the death of Christ as full payment for sin, and acceptance of the risen Christ as Savior, Lord, and God.

The Bible affirms that Christ is the only way to the Father (John 14:6). The Bible also affirms that those who believe in the Son have everlasting life, but those who do not believe in the Son shall not see life, and God’s wrath abides on them (John 3:36). The Bible does not allow for a compromised third position here. Either Jesus is the only way, or He isn’t. If people could be saved through other religions, then there would have been no reason for Jesus to die for our sins on the Cross.

Pastor Thielen’s new book provides an excellent example of some of the various compromises people make when they allow man’s ever-changing opinions to be the authority over God’s Word. The words of Jude echoed in my head after reading this report. “Beloved, while I was very diligent to write to you concerning our common salvation, I found it necessary to write to you exhorting you to contend earnestly for the faith which was once for all delivered to the saints.” (Jude 1:3).

We need Christian men and women today who are prepared to be bold and unashamed of God’s Word and the gospel, and be prepared to contend for the faith in this increasingly secularized culture and church!

Once again I will be on the well-known “Rick and Bubba” radio show—Friday morning at 10:20am ET, 9:20am CT for about 20–25 minutes. These two fun guys (at least one of them has toured our Creation Museum) have a weekly audience of 1.2 million listeners and are heard on 70 stations (plus XM 166). Go to www.rickandbubba.com and notice the “Listen Live” tab at the top right.