This was a headline in a newspaper in Australia this past November. Many of us probably remember the devastating floods that occurred in Australia last year, as they received headline news around the world. There were many local flood events—some more catastrophic than many had seen before in their lives. One such catastrophic event occurred not far from my home city of Brisbane in Queensland. I was sent a newspaper item about this flood, and I thought was worth bringing to your attention. 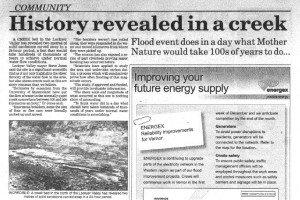 Those of you who have seen AiG videos or attended some of our presentations may have heard our speakers giving information on the results of the catastrophic eruption of Mt. St. Helens in Washington State. As a result of this volcanic eruption, hundreds of feet of sedimentary layers were formed rapidly, and canyons were formed very quickly, and some were carved through hard rock in just a few years. Such catastrophic processes occurring in the present give us just a tiny inkling of the sorts of processes that could have occurred during the global Flood of Noah’s day. This really helps people understand the utter devastation a global Flood would cause. Many people don’t understand the incredible erosion power of water. AiG geologist Dr. Andrew Snelling often speaks on his research at the Grand Canyon, showing where enormous boulders were carried along by the Flood waters, and layers of rock were sheared off.

Well, once again, a “tiny” catastrophe in the present has given us a glimpse of the power of water in a Flood situation. Read this news report about what happened in a valley west of the city of Brisbane, Australia last year.

A creek bed in the Lockyer Valley has revealed two metres of solid sandstone carved away in a 24-hour period, a feat that would take hundreds of thousands of years to achieve under normal water flow conditions.

Lockyer Valley mayor Steve Jones said the site is a significant scientific find as it not only highlights the sheer ferocity of the water flow in the area, but also shows events such as this are more common than we believe.

“Estimates by scientists from the University of Queensland have put the flow of water in the normally quiet creek somewhere between 100 and 200 kilometres an hour,” Cr Jones said.

“Enormous boulders, some the size of four or five cars were literally picked up and moved.

“The boulders weren’t just rolled along, they were suspended in the water and moved kilometres from where they were picked up. …

“The sheer scale and magnitude of what occurred at this site is nothing short of astounding.

“To think water did in a day what should have taken hundreds of thousands of years under normal water conditions is astonishing.” You can read the entire article on Gatton Star’s website.

Isn’t it interesting that people look at layers like those at the Grand Canyon or river valleys and canyons in Australia, and they think it terms of very long time periods (thousands or millions of years)? Yet we have observed catastrophic conditions in the present that could form such valleys and canyons quickly! Problem is, most people don’t think in terms of a global Flood in the past, because they’ve been indoctrinated to believe that the Bible’s account of history is not true.

We need to use such events as this news report to begin talking about the Flood of Noah’s day and what it would have done, so people we can challenge others that such an event really did occur. The history presented in the Bible’s is true, and because it is true, we can be sure that the gospel based in that history is also true.

We were thrilled at the response to the AiG conference at Calvary Chapel in Oceanside, California. Dr. Gary Parker and I spoke Saturday evening, Sunday morning and evening, and Monday morning and evening. As well as the normal church services and the AiG conference program, Dr. Parker spoke to the youth, I gave presentations to kids and teens at special programs Monday morning, and the services on Sunday were translated into Spanish. Also, the presentations were broadcast live over the internet.

Here are some photographs taken during that time to gives you a bit of a feel for this wonderful event. 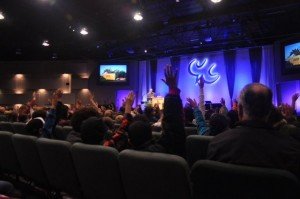 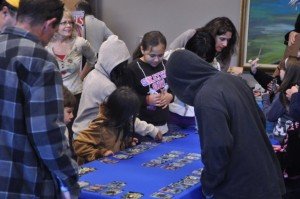 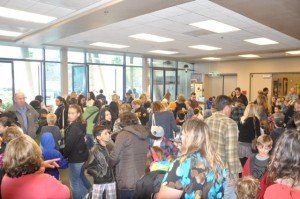 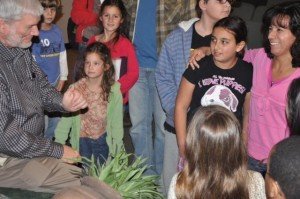 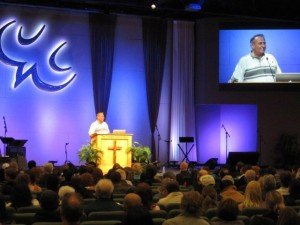 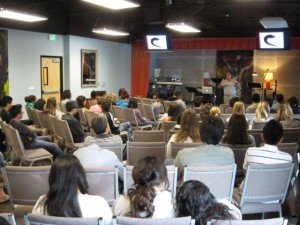 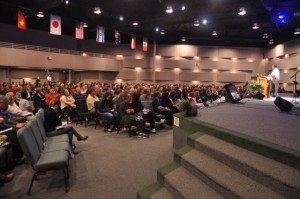 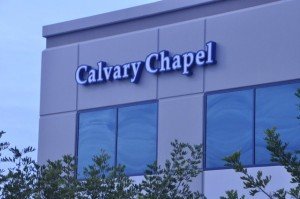 Previous Article Where Is Baker Publishing Group Heading? Next Article A “Love Note” from Our Creator