The Memory Man Returns to the Museum 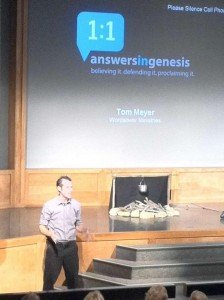 Tom Meyer is a ministry friend who has been living for the past four years as a student and teacher in Jerusalem. He still spends chunks of time in the U.S. (he’s from Chicago originally)—including teaching stints at Shasta Bible College in northern California. Tom visited the Creation Museum again this past week. We had him speak to our staff during two chapel sessions and also five times to our museum guests; he recited Genesis chapter 1–11 from memory in front of our visitors and, on alternate days, he recited all 22 chapters of the book of Revelation from memory! For our staff on Tuesday morning, he spoke the books of Nahum and Jonah from memory, and on Thursday, it was portions of Exodus and Matthew.

Tom and his wife Sarah were married in Jerusalem last month—they met there three years ago. He proposed to her on a Christmas Eve in Bethlehem in 2010. Yes, he’s a romantic!

Tom plans to return to Israel next year to begin work on a PhD in the area of archaeology and the Bible.

Find out more about Tom’s evangelistic ministry in Israel—a nation which has very few, Bible-believing churches—by going to www.thescripturecannotbebroken.com.

While on that website, you can see about booking him for your church or school before he returns to Israel next year.

A recent article about Tom and Sarah’s current travelling ministry appeared in a Minnesota newspaper (the state where Sarah is from).

I encourage you to read Dr. Terry Mortenson’s recent blog post on how the secular media and the scientific community are highly prone to suppressing anything that questions the scientific validity of Darwinian evolution and global warming. Dr. Mortenson, one of our researchers and speakers, points out that all scientists are biased individuals and bring their worldview to their studies. (Yes, even our own AiG scientists have their own presuppositions that come to bear on the evidences they study.) Dr. Mortenson has written extensively on the theme of how, in the past 200 years, scientists have generally worked within an anti-biblical and naturalistic worldview (with some of them being outright atheists) and those kinds of presuppositions have influenced them away from the Bible. Sadly, even many Christian leaders have accepted the views of fallible, biased secularists and have rejected the clear teachings of Genesis about a recent creation and a global Flood.

More than ever, Christians must stand up for biblical authority by studying how we can use science to confirm the Bible, and then help young people know how to answer the skeptical questions of the day.

Thanks for stopping by and thanks or praying,