I wanted to briefly comment on the horrible terrorist actions of a crazed gunman and bomber in Norway—who killed 76 people late last week. (This Saturday, in our news commentary called News to Note, Dr. Elizabeth Mitchell will go into depth about these brutal events and the man behind them.)

First media reports about the killer indicated that he was some “right-wing Christian fundamentalist.” Some commentators called him a “Christian” terrorist as opposed to a Muslim terrorist (see this report, for example). To be fair, it was police who initially described the killer to reporters as a “right-wing Christian fundamentalist”—you see, under the category “religion” on his Facebook page, the murderer wrote “Christian,” and that’s what apparently led police to make their wrong pronouncement. Sadly, they also added the loaded and unfounded term “fundamentalist.”

Many reporters as well as anti-Christian commentators ran wild with that false characterization of a “Christian fundamentalist.” However, a review of his 1,500-page manifesto and watching one of his videos have led our researchers to conclude that his beliefs are not based in biblical Christianity at all. On pages 1307–1308 of his manifesto, for example, he distinguishes between what he calls cultural Christendom and religious Christendom, stating that “a majority of so called agnostics and atheists in Europe are cultural conservative Christians without even knowing it.” He attempts to explain the difference, and then states his own personal belief:

So this was a man who is certainly not a Christian believer who had any relationship with God. In addition, he redefines the word “Christian” in such a way that when he declares it the duty of all Europeans to rise up to defend Christendom against Islamic people (and others, like “cultural Marxists”)—he even considers European agnostics and atheists to be a part of Christian Europe!

Read more about these tragic events in Norway in this weekend’s News to Note.

Kentucky Tourism and the Creation Museum

AiG and the Creation Museum are members of the local Chamber of Commerce. Ever since the museum opened four years ago, it’s been amazing to see so many businesspeople come up to some of our AiG staff at various Chamber meetings to congratulate us for bringing so many tourists and tourism dollars to the area (on Saturday we had close to 3,000 people visit the museum). And it’s always wonderful to hear from many of these businesspeople who are Christians and say to us that they are so thankful God is blessing the museum outreach.

At a recent Chamber of Commerce breakfast, three of our staff members heard a talk by the Commissioner of Tourism and Travel for the state of Kentucky—Mike Cooper. As Mike summarized the importance of tourism to the state, he not only highlighted the success of the Creation Museum as a big tourist draw,  he also said he looks to even bigger and better things through the next AiG project: the Ark Encounter (a full-size Noah’s Ark) in Grant County, Kentucky.

During a question-and-answer time at the conclusion of Commissioner Cooper’s talk, someone asked if he could give an update on the progress of the Ark Encounter. Commissioner Cooper deferred to the AiG staff in the audience, and so we had the opportunity to share that we hope to have groundbreaking in late summer, and that things are progressing well as we work with Grant County officials (and the state of Kentucky in general).

Commissioner Cooper indicated that of the several northern Kentucky counties, Boone County—where the Creation Museum is located—saw tourism revenue last year of $1.2 billion, which was by far the highest figure for any of these counties. Of course, the Creation Museum doesn’t take credit for the majority of those dollars, as we have a very good aquarium and other tourism attractions in the area. But the museum impact has been significant (as local hotel and restaurant owners will attest).

Five years ago, some people thought the Creation Museum wouldn’t fly. In fact, one Chamber of Commerce member who attended the recent breakfast confided afterwards with Mark Looy, our CCO, that he didn’t think many people would visit and that the museum would fizzle; but to his credit, this man admitted to Mark he was wrong.

Today, some people are saying that the Ark Encounter won’t bring in the 1.6 million people a year that our feasibility study (through the respected America’s Research Group) has estimated will visit. But the state commissioned its own study to gauge the possible number of visitors to the Ark Encounter (and we had to pay for this second, independent study, by the way), and Hunden Strategic Partners came up with a figure of 1.2 million visitors a year who would come from outside Kentucky; now, when you take that 1.2 million out-of-state annual figure and add the many tens of thousands of people (or hundreds of thousands) who will come to the Ark from throughout Kentucky, the two separate studies are quite similar in their projections. Yet there are still some opponents of our ministry who dismiss these figures from two renowned research groups and say the Ark Encounter won’t see good attendance. Well, we’ve heard all that before—with the Creation Museum.

Here is a photo of Commissioner Cooper addressing the recent Chamber of Commerce breakfast in northern Kentucky. 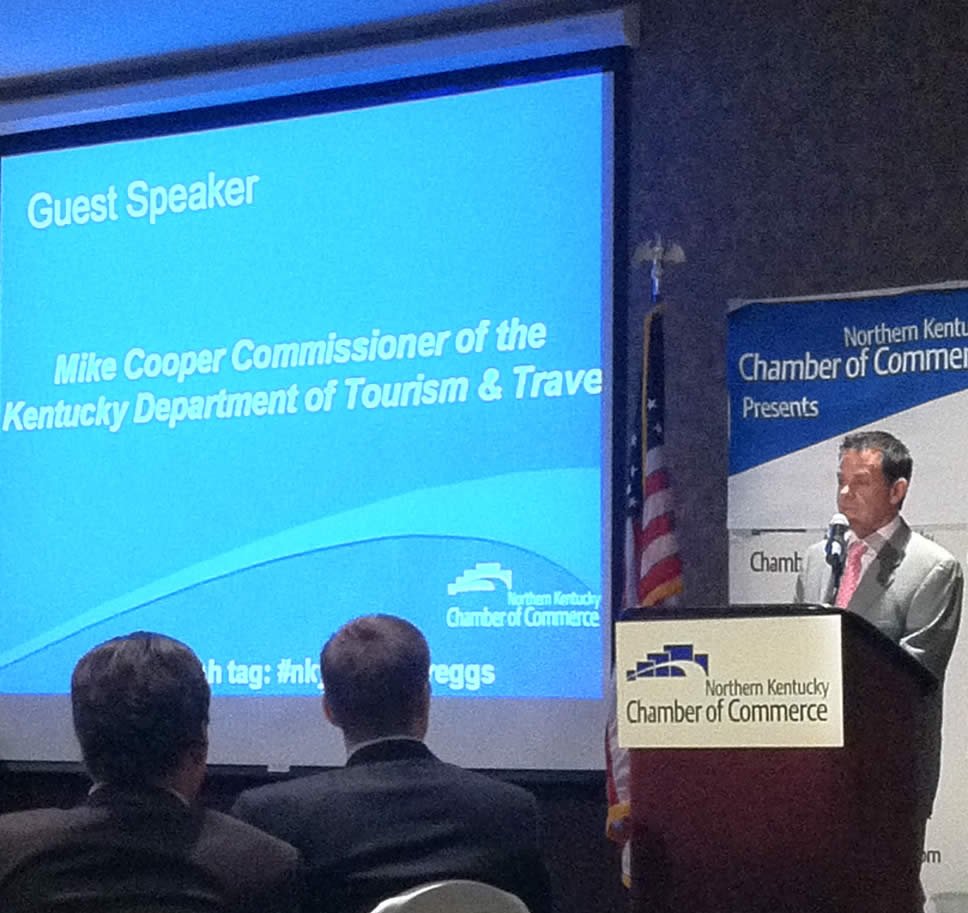 For updates on the Ark Encounter, go to ArkEncounter.com.

Previous Article The “Rush” Has Been On! Next Article The Memory Man Returns to the Museum