“The Bible Is Dead—Long Live the Bible” 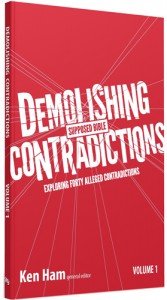 This is just the first in a series of books to help people be equipped with answers to what are claimed to be contradictions in the Bible.

I have found that once you are able to give answers to the issues of evolution and millions of years skeptics often get frustrated. They then move on to claim there are all sorts of inconsistencies or contradictions in the Bible.

I remember when political commentator and stand-up comedian Bill Maher broke into our offices (see previous blog post on this incident). His colleagues sneaked him in through the back door while the museum was still a construction zone. He then deceived us into an interview. The cameras were rolling and he began interviewing me. I did not know who he was and thought that his presence in the office had been approved by our publicist. He asked all sorts of questions about creation, evolution, and age of earth issues. I could tell he was getting frustrated. At one stage, his producer blurted out something like, “Do you have an answer for everything?” They were really upset that we were able to give answers to defend our faith and uphold God’s Word. 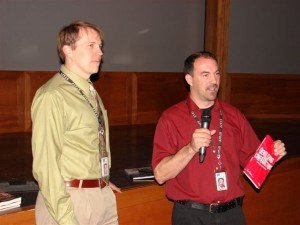 AiG researcher and speaker Bodie Hodge (right) talked to the staff this morning about our new Demolishing Contradictions book and summarized its contents. Dan Zordel is on the left.

The three Answers Books have been AiG’s biggest-selling apologetics resources. They are extremely popular. But we also recognized the need to begin producing books that detail answers to the supposed contradictions in the Bible.

I saw this need once again recently when I read an article in The Chronicle of Higher Education by Timothy Beal, a professor of religion at Case Western Reserve University in Ohio. The article was excerpted from his book The Rise and Fall of the Bible: The Unexpected History of an Accidental Book.

For instance in this essay we read the following:

The Bible is dead; long live the Bible. Not as the book of answers but as a library of questions, not as a wellspring of truth but as a pool of imagination, a place that hosts our explorations, rich in ambiguity, contradiction, and argument. A place that, in its failure to give clear answers and its refusal to be contained by any synopsis or conclusion, points beyond itself to mystery, which is at the heart of the life of faith. We might even go so far as to say that the Bible kills itself. It deconstructs itself. Reading it undermines the iconic idea of it as a univocal, divinely authored book and our desire to attach to it as such. Scriptures have a tendency to exceed the boundaries of orthodoxy and resist closure. The Bible keeps reopening theological cans of worms. It resists its own impoverishment by univocality. In so doing, it fails to give answers, leaving readers biblically ungrounded.

One of the main points in this essay concerns the supposed contradictions in the Bible. It was interesting to note that two of the main ones brought up in this essay are dealt with in Demolishing Contradictions. These are questions we have previously answered many times over the years. Such answers have been available on the AiG website for along time.

Given how many hands have been involved in so many contexts over such a long time in the history of this literature, can we honestly imagine that no one noticed such glaring discrepancies? Can we believe, for example, that the seam between the first and second creation stories in Genesis, as well as the many other seams found throughout the Torah, were not obvious? That if agreement and univocality were the goal, such discrepancies would not have been fixed and such rough seams mended long ago? That creation stories would have been made to conform or be removed?...That Judas would have died twice, once by suicide and once by divine disgorge? And so on. Could all those many, many people involved in the development of biblical literature and the canon of Scriptures have been so blind, so stupid? It’s modern arrogance to imagine so.

The supposed contradictions between Genesis 1 and Genesis 2 are so easy to answer. Genesis 1 is an overview of creation in chronological order (1, 2, 3, 4, 5, 6). Most of Genesis 2 is a detailed account of the sixth day of creation. For example, in Genesis 1 we read that God made man “male and female” (Genesis 1:27). Then in Genesis 2 we read the details of how God took dust and made man and then showed animals to man to name. Adam then realized that he was also, so God put Adam to sleep and made the first woman from his side. They were “one flesh” (Genesis 2:24). In Matthew 19, dealing with the topic of marriage, Jesus quoted from Genesis 1:27 and Genesis 2:24 referring to the same one man and one woman in marriage. Jesus obviously did not view Genesis 1 and Genesis 2 as contradictory. Rather, they are complementary accounts—one being more of a detailed explanation of certain aspects from the overview account.

The accounts in the gospels dealing with the death of Judas are similarly complementary. One deals with the fact that Judas hung himself. The other deals with a specific aspect of what happened as a result of his suicide—as the body then began to decay, it fell and split open. There is no contradiction here, just more details of an aspect of the death of Judas.

In his essay, the religion professor states the following:

For many potential Bible readers, that expectation that the Bible is univocal is paralyzing. You notice what seem to be contradictions or tensions between different voices in the text. You can’t find an obvious way to reconcile them. You figure that it must be your problem. You don’t know how to read it correctly, or you’re missing something. If the Bible is God’s perfect, infallible Word, then any misunderstanding or ambiguity must be the result of our own depravity. So you either give up or let someone holier than thou tell you “what it really says.” I think that’s tragic. You’re letting someone else impoverish it for you, when in fact you have just brushed up against the rich polyvocality of biblical literature.

Actually, he really has answered the real problem with such supposed contradictions when he states, “If the Bible is God’s perfect, infallible Word, then any misunderstanding or ambiguity must be the result of our own depravity.” Yes, we are finite, fallible, sinful creatures who don’t want the truth. If we come to the Bible looking at it as a work of man, we will believe we “see” problems. But if we come to the Bible, recognizing it for what it claims to be—the God-breathed Word (2 Timothy 3:16)—then we see things differently. If we come to the Bible with the right attitude, instead of “seeing” problems, we will carefully study the supposed problems. As you do so, you will overwhelmingly find that there are answers.

Now I am not saying we will always have all the answers, as we don’t know everything. But over the years, I have seen many of the supposed contradictions and problems in the Bible answered. Sometimes archaeology has given us information we previously didn’t have, or we have found other information that has shed light on what was thought to be a problem.

Answers in Genesis is going to be producing more volumes of the Demolishing Contradictions series. If you don’t have the first volume, I urge you to obtain one. 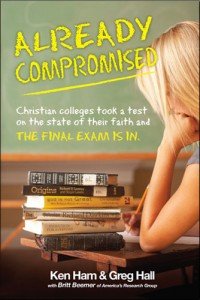 You can read the entire article by this religion professor.

Previous Article The Survey Says . . . Next Article Congratulations to our Radio Friends in Dayton and Springfield