Don’t Give Up Your “Starting Point”

Yesterday (Sunday), I spoke three times in the church my mother attends in Brisbane, Australia. A number of people drove all the way from the town of Dalby (2.5 hours away). There was a small busload and others from the Gold Coast (1 hour away), and others drove from outlying suburbs. One 80-year-old lady caught a train from north of Brisbane (Redcliffe) and traveled 1.5 hours and then 30 minutes by taxi. Also, it was thrilling to see a good number of young people.

For one of my presentations, I concentrated on teaching people that there are only two starting points to develop one’s worldview. You either start with God’s Word or man’s word (just as we depict in the “Starting Points Room” at the Creation Museum). I shared that because of the false view of “neutrality” that permeated our culture, Christians had been intimidated and given up their starting point. I challenged the congregation that God’s people have to stop giving up their starting point.

A number of people came up and said that they could see that many Christians had given up their starting point and how this had caused Christians to be rather ineffective in their witnessing and in affecting the culture. As one man said to me, “you put it so simply—I see it now. I’ve been one of those that gave up our starting point. Thank you so much for teaching me how to stand on God’s Word.”

I had many other testimonies during the day including the following:

After the second session Sunday evening, most people stayed for another half hour for a question time.

One of the major Christian book distributors in Australia, Koorong, supplied books and some DVDs for the event. People were hungry for these resources. Three of the books they supplied were The New Answers Books (1,2, and 3). These are the biggest-selling creation apologetics books in the world. The books that were supplied all went. There is a incredible hunger for the resources—people want to be equipped.

Here are some photographs: 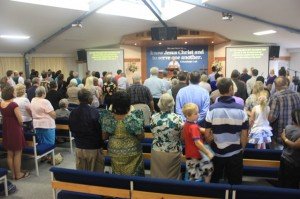 People in the auditorium (there was an overflow room as well). 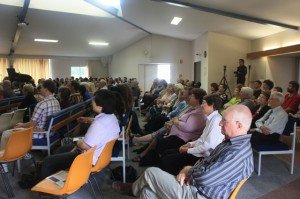 Another photo of the auditorium. 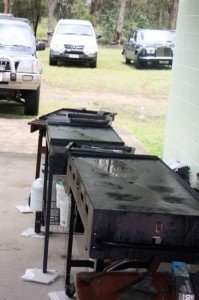 The great Aussie BBQ. Because so many people were talking to me, I didn’t get a photograph of the BBQ while the cooking was in progress! But I took this photograph after the food had been cooked. 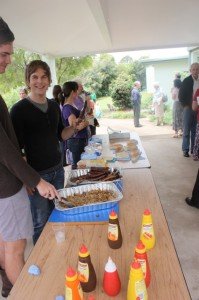 Holding up an Aussie beef sausage cooked on the barbie. 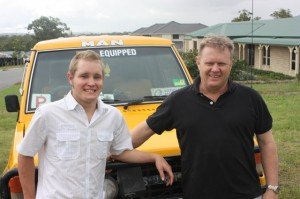 My brother David and his son Shane—it has been great to spend time with family and see many of our family members at the program last night.

I urge you to read our lead article today on the AiG website entitled, “Media Mania.”  The media frenzy in reaction to the announcement of the Ark project has been incredible—imagine what will happen when the Ark Encounter opens its doors. Furthermore, the Ark Encounter will be featured tonight (Monday) on ABC–TV’s evening newscast (see Ark Encounter on ABC–TV News Tonight).