As God has blessed the Answers in Genesis ministry, we have been encouraged to see a tremendous amount of media coverage highlighting the biblical truths AiG proclaims through various outreaches.

[Editor’s Note: This article has been updated as of February 16, 2012, to reflect the current status of the Ark Encounter project.]

As God has blessed the Answers in Genesis ministry, we have been greatly encouraged to see a tremendous amount of media coverage highlighting the biblical truths AiG proclaims through various outreaches. AiG has seen media reports on our Creation Museum appear in diverse places since it opened over three years ago, even twice on the Al Jazeera TV news network (the Middle Eastern news service known for its broadcasts to several Muslim-dominated countries). The widespread media coverage hit a peak in May 2007 when the Creation Museum opened, as more than 100 credentialed media turned out for the first days of the museum’s grand opening. 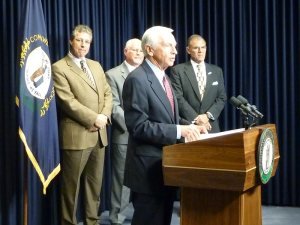 As Gov. Steve Beshear of Kentucky makes the announcement that the Ark Encounter should be coming to Grant County, Kentucky, standing with him (left to right) are Judge-Executive Darrell Link of Grant County, Mike Zovath, Senior VP of Answers in Genesis, and Cary Summers of the Nehemiah Group.

Today, an article in the New York Times (which takes up most of a page in the paper’s national section) has capped a few days of frenzied reporting on AiG once again, as AiG, along with our partner Ark Encounter, LLC, announced—with Governor Steve Beshear of Kentucky presiding—that a full-scale Ark would be built in northern Kentucky. After Wednesday’s press conference in the state’s impressive Capitol building, Google alerts were coming to us almost every 5-10 minutes from all around the country (and world) as newspapers, websites, and blogs were commenting on the Ark announcement. The Ark Encounter was even front-page news in some newspapers (e.g., Courier-Journal newspaper of Louisville, the Cincinnati Enquirer, etc.). Of course, there were the non-journalists who blogged outrageous comments, such as one person who suggested that the governor might have taken a bribe to support the Ark Encounter. (We will not provide you with that web-link and give the blogger the satisfaction of seeing additional visitors coming to his blog to read his scandalous suggestion.)

In the serious media, one of the harshest comments about the Ark Encounter appeared Thursday on the editorial page of the state’s leading newspaper, the Courier-Journal (of Louisville). It lashed out at Governor Beshear for mixing church and religion, relegating his pro-economy, pro-jobs stance to be of less importance. At Wednesday’s press conference (on YouTube), the governor declared that priority number one for him as governor is to build the economy in Kentucky and add jobs. The Ark Encounter will be a major attraction in Northern Kentucky, Governor Beshear stated, and he thus strongly supports a project that will be adding several thousand jobs (even beyond the estimated 900 eventual jobs at the complex itself) by 2014, and that the surrounding area will also see the construction of hotels, restaurants, gas stations, and other businesses. 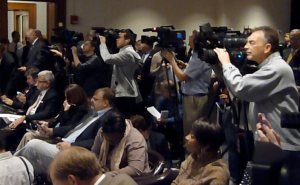 The packed press room in the state Capitol building in Frankfort.

In the TV broadcast world, the Ark was mocked last week in a 6-minute segment on MSNBC’s “Countdown” program, and also ridiculed on its sister program “The Rachel Maddow Show.”

As we write this web article, we await the publication of an article in the Times of London about the Ark Encounter. Reports in the Daily Mail and The Independent have already appeared in the British press.

In the news reporting about the opposition to the Ark Encounter, it appears that many of Gov. Beshear’s critics are far more concerned about the governor supporting a themed attraction that features elements from the Bible than they are about the thousands of jobs that will be created inside and outside the attraction, as Kentucky still reels from the recession (10% unemployment). Such an attack only helps to reveal the anti-religious nature of many Ark detractors (and some journalists) who are so set in their anti-Christian beliefs that they will not even consider how this family-friendly and economically sound attraction will be a great asset to the state in a difficult time.

The governor pointed out that the project qualifies to benefit from tax incentives provided by the state’s Tourism Development Act, which is designed to bring tourist attractions to Kentucky. The Act does not discriminate according to the subject matter of a theme park, Gov. Beshear observed, and thus there is no constitutional problem (which even some of our most vocal critics, including a lawyer for an atheist group, say is probably legal). Also, the Ark Encounter will not, as opponents declare, take money from the state budget. Even though some of the sales tax it collects at the attraction would be rebated by the state, the Ark Encounter is projected to actually add tens of millions of dollars of sales tax each year to the state—not take away.

The sales tax generated for the state is not the only aspect of the economic boon that would occur inside the state. Other state taxes generated by the project include employee income taxes, real estate taxes, and corporate income taxes, which will all generate millions of dollars of new revenue to the state and local governments. Local services like public libraries will also benefit.

If the Ark opponents in Kentucky want to stop this job-generating and revenue-raising project from being built in their state, the Ark Encounter LLC of Missouri will only move the attraction to a more accommodating state and enjoy the incentives offered there (one state government has already expressed serious interest). Hundreds of millions of dollars of sales tax would be lost for Kentucky, and millions lost in other taxes as those dollars would leave along with the project (plus thousands of associated jobs). But that may be the price that some critics are willing to pay in order to advance their anti-Christian agenda; they may not care that the state will continue to languish with high unemployment and depleted revenues.

The Creation History Project made a page that gives a rundown of many of the articles that have appeared in a variety of media outlets that reported on the Ark announcement.

In particular, you may want to view the following pieces from:

To find out more about the exciting Ark Encounter, and to participate in getting it built by sponsoring a peg, plank, or beam, go to arkencounter.com. To read an article on the governor’s announcement on Wednesday, go to http://www.answersingenesis.org/articles/2010/12/01/ark-encounter-news-release.