The Utter Absurdity of the Secular Worldview

I just read Steve Hawking and Leonard Mlodinow’s latest book,The Grand Design, in which the authors attempt to answer questions like: “Why is there something rather than nothing? Why do we exist? Why this particular set of laws and not some other?” Hawking is a brilliant physicist. Yet, since he has rejected the biblical worldview, he cannot cogently answer any of the questions he asks. His explanation of the universe is a self-refuting journey into the absurd. Let me give a few examples:

In the introduction, Hawking states, “Philosophy is dead.” (p. 5). Yet, the rest of his book is primarily an exposition of Hawking’s philosophy—scientific determinism (p. 34.) Hawking makes no attempt whatsoever to defend his philosophy; he simply arbitrarily asserts it. Such arbitrariness is the mark of irrationality. He asks, “Do we really have reason to believe that an objective reality exists?” (p. 34). Of course, if there is no such thing as objective reality, then why would a person bother writing a book on the topic?

There are some things that Hawking gets right, of course. Some of the descriptions of quantum phenomena—such as the two-slit experiment—are quite good. Also, Hawking correctly acknowledges that the big bang is an atheistic model; that is, it attempts to explain the origin of the universe without invoking God. “Spontaneous creation is the reason there is something rather than nothing, why the universe exists, why we exist. It is not necessary to invoke God to light the blue touch paper and set the universe going.” (p. 180). But much of the book shows the inconsistency of secular thinking.

Even the title of Hawking’s book is ironic, since Hawking does not believe that the universe is designed at all. By his thinking, this universe is simply one of many that popped into existence from nothing. Hawking is well aware of how precisely fine-tuned the universe is in order to allow for human beings to exist. In explaining why the universe appears so well designed, Hawking appeals to his belief in multiple universes; this just happens to be one in which the conditions were right for us to evolve to observe the universe. Students of logic will recognize this as the fallacy of irrelevant thesis. It doesn’t actually answer the question.

Hawking concludes that the universe is the inevitable result of the law of gravity: “Because there is a law like gravity, the universe can and will create itself from nothing in the manner described in chapter 6.” (p. 180). But my question is this: Apart from God, why would there be a law of gravity, and why would the universe be compelled to obey it? Why does the law of gravity apply at all times in all places, and why does it have a simple mathematical form that humans can understand? The biblical creationist can answer these questions. But Hawking has obviously not reflected adequately upon these issues. The secular worldview cannot make sense of laws of nature.

Even the Acknowledgements section of the book shows the utter absurdity of the secular worldview.

Dr. David Crandall, director of AiG Worldwide, sent the following photographs from Israel as he and Dr. Andrew Snelling are leading this year’s AiG Israel tour: 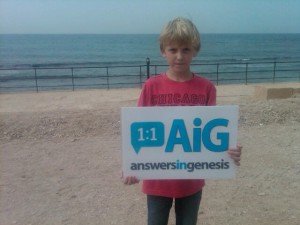 One of the Parson family holds an AiG sign at Mediterranean. 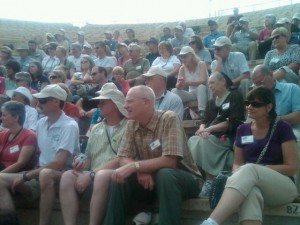 This is the AiG Holy Land group as Dr. Crandall preached this past Sunday morning at Caesarea.

Neither do I exercise myself in great matters

(Psalm 131:1) A Song of degrees of David. LORD, my heart is not haughty, nor my eyes lofty: neither do I exercise myself in great matters, or in things too high for me.

The answer to questions of how could God be just if He forgives the worst of sinners is that those are proud questions, too high and of no concern for us.