A College with a Strong Creation Statement

In my blog post yesterday, I quoted from and commented on (using Scripture) the compromised beliefs of a seminary professor who has proposed his ideas on how to fit billions of years into the Bible. Following on from that post, I began looking at various statements of faith from churches, Christian colleges, etc. on the internet.  And I found out that most statements of faith had a very general statement on creation—they were so general, in fact, that they could certainly allow for billions of years and evolution.  Such general statements can sadly lead to the door of compromise being opened and eventually lead a college, church, etc. down the liberal path.

It was thrilling to read this creation statement from Appalachian Bible College (located in Beckley, WV—in the beautiful Appalachian mountains):

We believe that the first eleven chapters of Genesis are the literal history of the early Earth (Matthew 19:4, 24:37).

We believe that this material universe is the result of a sequence of unique creative acts of God the Son, accomplished with the aid of God the Holy Spirit and directed by God the Father (Genesis 1:1, 2; Colossians 1:16).  We believe these creative acts were ex nihilo, completed by the mere spoken commands of God (2 Peter 3:5).  We further believe that these creative acts were accomplished in six literal twenty-four hour days (Exodus 20:11).  Therefore we hold to a young earth view supported by the genealogies and other time information provided in the Word of God.  We also believe that the material universe was created in total perfection (Genesis 1:31) but subsequently was sentenced to a slow decay and eventual destruction by the Curse (binding), which was part of the penalty for the disobedience of the parents of all mankind, Adam and Eve, whom we view as real, literal people, created on the sixth day of Creation (Genesis 1:27, 2:7–3:19). We reject all concepts of a pre-Adamic race.  We believe that the biblical Noahic Flood (Genesis 6–8) was a real, year-long global event, the result of the judgment of God on the hopelessly rebellious descendants of Adam and Eve (Genesis 6:5, I Peter 3:6), and resulted in much of the present geology of the Earth, including most of the fossil graveyards of myriads of plants and animals then living.  We believe that only eight human souls, Noah and his family, survived the Flood (Genesis 7:13 and 8:18) and that all mankind now living are descended from this family, dispersed over the face of the Earth by the confusion of tongues described in Genesis 11. Now that’s the type of strong statement we need to have in our Christian institutions.  How refreshing to find a Christian college that is prepared to make such a statement with such detail to do their best to not to allow the religion of this age (millions of years/evolution) to in any way infiltrate the college and undermine the authority of God’s Word—and lead young people down the path of doubt to unbelief!  I challenge Christian colleges, churches, etc. to begin to reconsider their statement of faith and see how it can be strengthened in this area that has involved so much compromise in today’s world.

Around 2,700 or More at First Keynote for Defending the Faith Conference

We had more than we expected at the opening of AiG’s Defending the Faith conference in Sevierville, TN (near Gatlinburg)—upwards of 2,700 were present for the first keynote. It was difficult to get a count, but over 3,000 chairs were put out with an estimated 250–300 empty chairs during the talks! How we praise the Lord for the response! Also, we heard that a major accident on I-40 prevented many people from getting to the conference last night.

Adults and children alike were so excited to participate in this almost week long conference in the beautiful Smoky Mountains area.  I will include photographs in my blogs this week.  Here are some photographs taken last evening of the auditorium and one of the second speaker for the evening, Dr. Andrew Snelling. 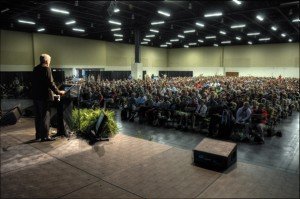 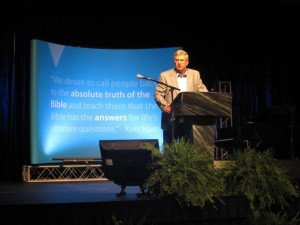 Swallow up death in victory

(Isaiah 25:8-9)  He will swallow up death in victory; and the Lord GOD will wipe away tears from off all faces; and the rebuke of his people shall he take away from off all the earth: for the LORD has spoken it.  And it shall be said in that day, Lo, this is our God; we have waited for him, and he will save us: this is the LORD; we have waited for him, we will be glad and rejoice in his salvation.

Our only defense against death is the Lord Jesus Christ who alone took it on face to face; on His Cross, He got near to death and swallowed it up and won. Thanks for stopping by and thanks for praying,