The Sad State of the Church in America

One of the things I often say in my presentations is that Ihaveobserved many churches allacross America that are not touching the culture as they used to; I have also observed the churches across the United Kingdom and Europe and seen the sorry state of the church there in those increasingly anti-Christian nations. Because these churches are not reaching the culture as they once were, they tend to water down the teaching of the God’s Word and make the church more entertainment oriented and gimmicky—in the hope of attracting people from the world.

But what they really should be doing is standing on the authority of the God’s Word and giving the world the answers they need to hear, so they understand the history in the Bible is true—which is why the gospel and Christian morality based in that history is true.

Sadly, most churches have allowed the world to invade the church by not taking a stand on a literal Genesis, which compromises God’s Word with the pagan religion of the age (evolution/millions of years). And they wonder why the majority of teenagers leave the church and why we are losing the next generation.

Most of thechurch’skids go to public schools where they are being taught a history that contradicts the Bible’s history. In church, theyjusthear messages of love, trusting in Jesus,and so on—but in their minds, the Bible can’t be trusted. Over and over again, I see churches thinking they have to come up with gimmicks to attract the world and try to keep the coming generations in church, because they are not teaching the Word of God as they need to be in this culture. They are not teaching people how to defend the faith and not giving them answers to know they can trust God’s Word. Most churches have allowed the coming generations to even question God’s Word based on what the world (i.e., public schools, science museums, TV, etc.) is teaching them.

And we continue to lose the culture! We will soon be where Europe and England are if we keep going the waythey have gone! If two thirds of young people continue to leave the church (as is currently happening) by the time they are teenagers, where is the church going to be in a couple of generations?! That is what the bookAlready Gone is all about (if you haven’t read it, I urge you to do so).

Below is an example in Michigan from a news website that to me represents the sorry state of the church in America and the gimmicky methods the church is attempting to use. Because by and large the churchhasn’t been teaching a message that will touch the culture—because in reality, the culture has invaded the church (http://www.mlive.com/news/muskegon/index.ssf/2010/06/spring_lakes_christ_community.html):

SPRING LAKE — A prominent Spring Lake church removed its cross Tuesday and has changed its name as part of a series of moves intended to make it more inclusive. C3Exchange, 225 E. Exchange, Spring Lake, was formerly known as Christ Community Church. The Rev. Ian Lawton, the church’s pastor, said the name change and removing the cross were designed to reflect the church’s diverse members.

“Our community has been a really open-minded community for some years now,” he said. “We’ve had a number of Muslim people, Jewish people, Buddhists, atheists. ... We’re catching up (to) ourselves.” . . .

Lawton said the church decided to change its name about a year ago and began taking ideas from members. He said the new name was chosen because the church is on Exchange Street, and “our community is a place where people can come to exchange ideas.”

He said the church is considering painting a heart, a globe and the word “exchange” on its exterior wall on the side where the cross stood, to symbolize “one love” for “all people.”

“We honor the cross, but the cross is just one symbol of our community,” Lawton said.

Lawton gave a sermon March 21 likening using the cross as a symbol of Christ’s life to using a bullet to remember Martin Luther King Jr. He said that opinion is his and not the church’s.

Lawton said most feedback the church has received has been positive. He said some people had not come to the church in the past because they had thought it was a traditional congregation, and others were disappointed by what they found when they came expecting a traditional service. . . .

“We want to make the whole experience from the moment people walk in the church .. to match our inclusive identity,” he said. “We’re not trying to change anyone, because we say, ‘Come as you are.’”

Lawton said C3Exchange does not mean to criticize or mock Christianity.

“We’re not any threat to the other churches,” Lawton said. “We want (other churches) to do well, but we’re trying to provide an alternative.”

When we are visiting an areawith a seminar,we invite some of our AiG supporters to come and spend some time with our team—as we have done for the past four days in Yukon, Oklahoma (near Oklahoma City).

I give them a behind the scenes update on what is happening at AiG and the Creation Museum.Here is a photograph as I spoke to a group of our supporters in Oklahoma over lunch on Sunday: 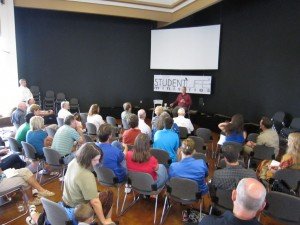 AiG’s Dr. Jason Lisle (astrophysicist) was well received with hisUltimate Proof of Creationseminar presentation on Sunday evening. People love being taught how to think and how to logically argue with a non-Christian as they defend the Christian faith: 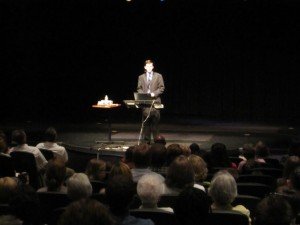 When Moses was gone into . . . then he heard the voice

(Numbers 7:89) And when Moses was gone into the tabernacle of the congregation to speak with him, then he heard the voice of one speaking unto him from off the mercy seat that was upon the ark of testimony, from between the two cherubims: and he spoke unto him.

Only after we pull away from the world to our quiet time with God, shut the door, still our heart, and open our Bible can we hear the Lord Jesus Christ speak us. Thanks for stopping by and thanks for praying,