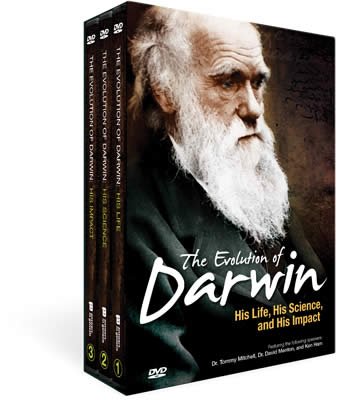 In an earlier blog post, I wrote about The Evolution of Darwin series by AiG that received two gold awards.  Below I have reprinted the press release that AiG sent out yesterday informing the media and others of three awards granted to AiG by the International Christian Visual Media group for videos produced by AiG.

2009 was dubbed “The Darwin Year” by many, as it was the year of the 200th anniversary of Darwin’s birth and the 150th anniversary of the Origin of the Species book.  AiG prayerfully considered what we should do that year bring the truth of God’s Word to the culture as secularists rejoiced over these anniversaries.  So, as secularists began a special year of worshiping Darwin, we at AiG decided to produce a new video series featuring three speakers covering all the major aspects of the creation/evolution issue: the importance of the book of Genesis, the life of Darwin, and a critique of his major arguments in the Origin of the Species.

Our very talented video team decided it wasn’t worth spending an enormous amount of money (all that we are given is the Lord’s money entrusted to us so we need to be very wise in how we spend it) on some elaborate production.  Instead, they believed we could come up with a very low budget, but extremely high quality production (and, of course, our dedicated staff give so sacrificially of their time to make this happen).  Under the leadership of AiG’s Ben Wilt, the series was produced—and how we praise the Lord that it has now received these gold awards.

The AiG video team has also been producing a series of Answers videos to go with the Answers books (three published right now)—the largest selling creation apologetics books in the world. 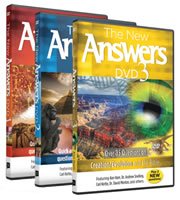 We were also thrilled to learn that The New Answers DVD 1 also won an award.

Here is a copy of the press release that was sent out yesterday:

“We have always strived to produce very high quality resources here at Answers in Genesis, and it is rewarding to have that recognized by the Christian media industry,” said Ken Ham, president of AiG and the Creation Museum.

“However, what makes us even more grateful is to have the evangelistic nature of our films recognized,” Ham continued. “We firmly believe that in this era of history, helping individuals have a true understanding of the biblical perspective on origins is vital to helping them understand that the Bible is the absolute authority for our lives, and that because the history in Genesis is true then the Gospel message based on that history is also true. And it is exciting to have this understood by our media production peers, fellow Christians who may not share our same viewpoint on creation, but share our heart for evangelism.”

“The Evolution of Darwin” is a three-part DVD series which features physician Dr. Tommy Mitchell, biologist Dr. David Menton, and leading apologist Ken Ham. The series covers Darwin’s early life, his science, and the detrimental impact of his beliefs on modern culture. “The New Answers DVD 1” is a highly stylized compilation of 12 brief interviews with leading creation scientists and researchers. Each interview is about four minutes long and tackles one of the extremely popular questions from the best-selling book, “The New Answers Book 1.” Both projects were published by AiG in 2009.

“We didn’t know that these productions had made it to the finalist round for ICVM’s Crown Awards until we heard we had won,” said Dale Mason, AiG vice president of media and product distribution. “What a great encouragement it is to the AiG staff that worked so hard to make these truly effective, especially considering the other high-quality films that were also in the running!”

The AiG video team was unable to be present at the Crown Awards banquet this year. The department is on-location in Vancouver, Wash., shooting a new 12-part DVD series that is scheduled to release next spring.

Answers in Genesis is a biblical apologetics ministry which conducts more than 250 teaching meetings each year, hosts an award-winning website, and produces the “Answers” radio program heard on more than 800 stations throughout the United States. It founded the high-tech Creation Museum, which opened to international acclaim on Memorial Day, 2007, and has attracted more than 1 million visitors since then.

You can purchase copies of these award winning DVD’s from the AiG online bookstore: The Evolution of Darwin series and The New Answers DVDseries.

The Tabernacle of the Congregation

(Leviticus 6:26)  The priest that offers it for sin shall eat it: in the holy place shall it be eaten, in the court of the tabernacle of the congregation.

(Proverbs 21:16)  The man that wanders out of the way of understanding shall remain in the congregation of the dead.