Did you happen to watch NBC-TV's program Dateline on Sunday evening? The entire hour (called “What were you thinking?”) was devoted to the topic of peer pressure. How there is a human tendency to “go with the crowd,” even when your common sense might tell you otherwise; for example, there was a scene in the TV show where actors got in an elevator and turned their backs to the door, and then people not in on the experiment entered the elevator and also turned to face the back wall of the elevator. Other examples on the TV program were of people following the directives of an authority figure, even though they were asked to do something wrong; for example, they were shown administering electrical shocks to a person who was shouting out in (fake) pain, but still continued to give more painful shocks because the head of the experiment was demanding it.

We found it highly ironic that the expert commentator for the program was well-known evolutionist Dr. Michael Shermer, because we have often pointed out over the years that most evolutionists would not dare question evolution because they want to remain respected amongst their peers (a kind of academic pride, I've called it) and don't want to go against the crowd (and perhaps be demoted or even fired—as shown in the Expelled: No Intelligence Allowed documentary). The beliefs they hold really had little to do with where the interpretation of scientific evidence might lead them.

Of course, atheist and evolutionist Shermer, who was at the Creation Museum in 2008 and engaged Dr. Georgia Purdom of our staff in an interview (more like a debate, though) inside the museum, would say the same of creationists—that we follow an authority ourselves: the God of the Bible is our starting point. However, Shermer’s starting point is that there is no God and the Bible is not true! We both have starting points, but it is only the Bible and the revelation concerning an infinite God that is the logical starting point, which is why we have the laws of logic and the laws of nature, etc., in the first place.  (For more on this I recommend The Ultimate Proof of Creation by Dr. Jason Lisle.)

Interestingly, the TV program's host started the Dateline program from inside the human evolution exhibit at the American Museum of Natural History in New York City, where he claimed that human evolution had programmed people's brains to go with the crowd—supposedly as some kind of evolutionary survival mechanism. Well, we believe that people act these ways because they are sinners, according to Genesis and various verses in the Book of Romans, and their selfish hearts don't want them to be seen as odd or different in the minds of others—and because people “loved darkness rather than light.”

I believe the devotion today at the bottom of this entry is very apt: it is a challenge not to go with the crowd, but be prepared to separate from the crowd for the sake of truth.

God’s Grace and a Car Accident

Joan Bandy and her daughter, Ruth Rhoades, visited the Creation Museum on Tuesday with Ruth’s children, Caleb (13), Joshua (8), and Jordan (5).  Joan says she and her husband visited on the fourth day of the museum being open in 2007.  They brought two of the grandchildren.

Ruth says that ten years ago she and her husband heard me speak at the Illinois Christian Home Educators conference in Napeville, Ill.

Joan told us they had a number of things that happened to discourage them from coming this week to the museum, but it was clear that God wanted them here.  They assumed that it was for the children.

On Tuesday at 7:20 PM after visiting the museum, they were in a serious car accident in Hebron, KY.  It was by the grace of God that all five of them were unhurt.  An EMT had been walking near the intersection as the accident happened.  She offered her assistance and proceeded to check everyone out, finding them all unhurt except for a few minor bruises.  They received assistance above and beyond the call from the Hebron Fire Dept. who aided them in getting all of their belongings to their hotel and help to acquire a loaner car. They praise for His grace in providing the right people at the right time.  Now at that point they could have said “let’s go home” but they were sure that God wanted them to bring the children back to the museum and they were determined to do just that.

Yesterday as they walked through the portico, a group of firemen came in.  Among them was one of the same firemen that had been such a help to them the day before. A teary welcome and exchange of names and addresses followed.

Here are two photographs of the family; one taken with me as we visited yesterday. 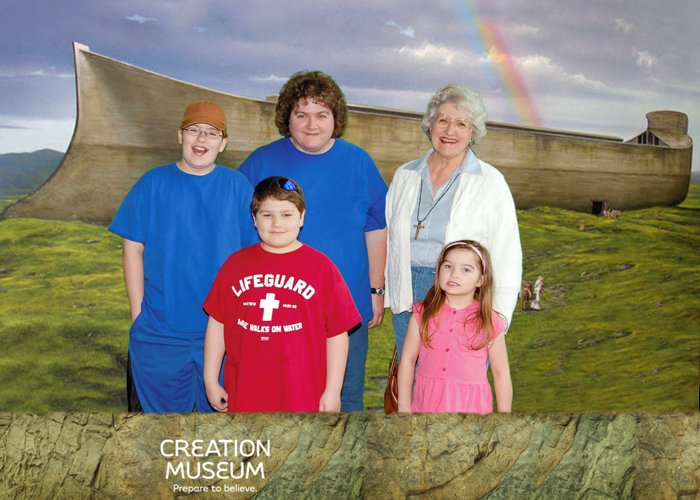 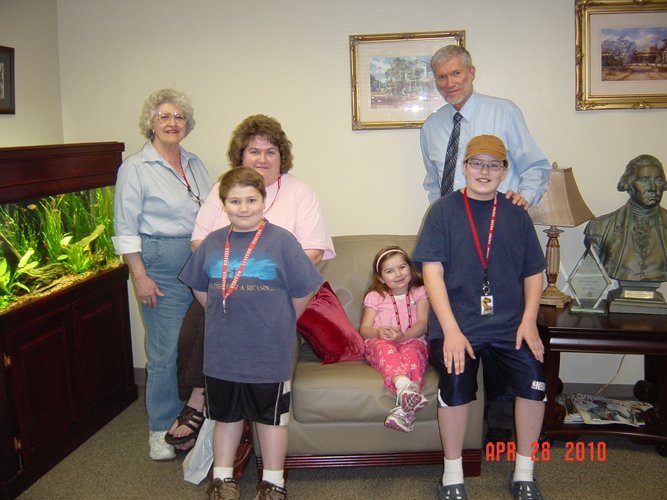 Separated themselves unto the law of God

(Nehemiah 10:28)  And the rest of the people, the priests, the Levites, the porters, the singers, the Nethinims, and all they that had separated themselves from the people of the lands unto the law of God, their wives, their sons, and their daughters, every one having knowledge, and having understanding;

The hindrance from knowing the Word of God is a refusal to separate from the world that has decided to separate itself from the Lord Jesus Christ. Thanks for stopping by and thanks for praying,