The Rest of the Story—Exposing Misquotes by an Atheist Professor

Recently on the highly trafficked website of The Huffington Post, Dr. Michael Zimmerman (biology professor at Butler University in Indiana), described as founder of the Clergy Letter Project, wrote a commentary for the site’s religion section entitled “The Danger of Ignoring Creationism.”  In that commentary, he blasts Answers in Genesis, making such statements as “Ham and his lot are clearly extremists.”  This comment followed a paragraph that certainly brings Zimmerman’s academic  integrity into question.  If what he claimed came under the same scrutiny normally associated with peer review or a PhD program, Dr. Zimmerman would be chastened for deliberately misquoting in order to support his false accusations.

Now keep in mind that Prof. Zimmerman, head of the Clergy Letter Project, is quoted by the American Humanist Association as declaring:

This quote comes from “Conversations with Christian and Atheist Activists: Michael Zimmerman.”

From his Huffington Post commentary, here are two examples of how this atheist misleads people concerning me (and Answers in Genesis as a whole).  He writes:

Such behavior is nothing new for Answers in Genesis and their founder, Ken Ham. Two outrageous but all-too-typical examples will make my point. Back in 1987 Ham published an article entitled "Creationism: Cure for AIDS?" in which he concluded that "the spread of AIDS can be stopped -- by simply rejecting false evolution." In an even more extreme move, Ham and Answers in Genesis opted to commemorate the fifth anniversary of 9/11 by running ads in the Cincinnati Inquirer [sic] and in Christianity Today laying the attack at the feet of evolution.

Now, let us examine his statements using the actual sources he quoted from.  I have included a copy of the 1987 article I wrote entitled “CREATIONISM:  CURE FOR AIDS?” so you can read the actual wording for yourself: 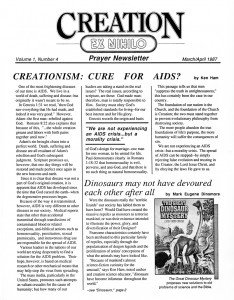 1.  Prof. Zimmerman states that I wrote “the spread of AIDS can be stopped -- by simply rejecting false evolution.”  This statement is very deceptive for two reasons:

Various leaders in the nations of our world are trying desperately to find a solution for the AIDS problem. Their hope, however, is based on medical research or other mechanical means that may help stop the virus from spreading.

The mass media, particularly in the United States, promotes such attempts as valiant crusades for the cause of humanity; but how many of our leaders are taking a stand on the real issues? The real issues, according to scripture, are these: God made man; therefore, man is totally responsible to Him. Society must obey God's established standards for living—for our best interest and for His glory. Also, the above sentences came after a section which related the reason for the AIDS virus to man’s sin and its consequences, in that we are now living in a fallen, degenerating creation:

Adam's sin brought chaos into a perfect world. Death, suffering and disease are all resultant of Adam's rebellion and God's subsequent judgment. Scripture promises us, however, that one day things will be restored and made perfect once again in the new heavens and earth. Since it is clear that disease was not a part of God's original creation, it is apparent that AIDS has developed since the time that God cursed the earth—when the degenerative processes began.

The quote involving the use of the word “evolution” is obviously used in the context of people who believe evolution and also reject the Bible’s account of creation as literal history (as Zimmerman does), thus rejecting the biblical doctrine that marriage is to be one man for one woman. Zimmerman is highly deceptive, then, when he writes that I believe if we  “simply” rejected evolution, AIDs will stop—it is not “simply” that, as Zimmerman alleges in his commentary, but AIDs will stop by trusting God’s teachings of personal conduct, as the full context of my sentence revealed—but which he conveniently omitted to make his deceptive claim. 2.  “In an even more extreme move, Ham and Answers in Genesis opted to commemorate the fifth anniversary of 9/11 by running ads in the Cincinnati Inquirer [sic] and in Christianity Today laying the attack at the feet of evolution.” Such misquoting and deception is sadly typical of a lot of what we read on the internet by atheists in regard to Answers in Genesis’ beliefs.  I point out once again the irony that Prof. Zimmerman (quoted as being an atheist above) is the person responsible for getting pastors together for “The Clergy Letter Project.”

Butler University hosts Zimmerman’s “Evolution Weekend” and “Clergy Letter Project” websites.  He lists 881 scientists as “technical consultants for members of the clergy.” BioLogos (a self-described Evangelical but evolutionist group) is listed as one of the websites of interest along with other pro-evolution organizations.

From his Clergy Letter website we read this breakdown:

For too long, the misperception that science and religion are inevitably in conflict has created unnecessary division and confusion, especially concerning the teaching of evolution. I wanted to let the public know that numerous clergy from most denominations have tremendous respect for evolutionary theory and have embraced it as a core component of human knowledge, fully harmonious with religious faith.

In the fall of 2004, I worked with clergy throughout Wisconsin to prepare a statement in support of teaching evolution. We were called to action by a series of anti-evolution policies passed by the school board in Grantsburg, WI. The response was overwhelming. In a few weeks, nearly 200 clergy signed the statement, which we sent to the Grantsburg school board on December 16, 2004. Additionally, groups of educators and scientists sent letters to the Grantsburg School Board and to the Superintendent of Schools protesting these policies. In response to all of this attention, as well as the efforts of others, the Grantsburg School Board retracted their policies.

The outpouring of support from clergy around the country encouraged me to make this a nationwide project. If you want to read more about it or join us in sharing this important  perspective, click here.  Encourage your clergy to consider signing the statement and please feel free to link to these webpages.

The Clergy Letter Project has also sponsored annual Evolution Weekend events.  These events provide an opportunity for congregations around the world to come together, in the way each feels most comfortable, to discuss the compatibility of religion and science.  By doing so, we are educating thousands and elevating the world-wide discussion of this important topic. If your congregation would like to participate in an Evolution Weekend event, please contact me.

Most recently, The Clergy Letter Project has created a data base of scientists interested in working with clergy members to answer questions about all aspects of evolution. To view this growing list, click here (If you are a scientist and would like to be added to our data base, please send me a note.)

Butler University So these members of the clergy support an atheist (who misquotes and uses deception) to help promote evolution!  Amazing!

Spoke comfortably to them

(2 Chronicles 32:6-8)  And he set captains of war over the people, and gathered them together to him in the street of the gate of the city, and spoke comfortably to them, saying, Be strong and courageous, be not afraid nor dismayed for the king of Assyria, nor for all the multitude that is with him: for there be more with us than with him: With him is an arm of flesh; but with us is the LORD our God to help us, and to fight our battles. And the people rested themselves upon the words of Hezekiah king of Judah.

We speak comfortably to the lost when we tell them how the Lord Jesus Christ wants to save them from hell and when we speak to the saved of God’s presence. Thanks for stopping by and thanks for praying,