This past Saturday at Cornell University, there was a lecture on our Creation Museum.  The university website advertised the event this way:

PRI Director Warren Allmon shares his thoughts after visiting the Creation Museum near Cincinnati. The Museum, which attracts hundreds of thousands of visitors annually, is dedicated to the proposition that the Earth is only 6,000-10,000 years old, and all living species were created as we see them today.

Either such evolutionists just don’t understand/don’t listen or deliberately mislead people, but we have seen it over and over again—and we’ve corrected it on blogs and in articles, over and over again: the straw man seen in the statement that we supposedly teach that “all living species were created as we see them today.” This is simply false.  Now, evolutionists usually say this to show that we can all see speciation occurring today, and that certain species have formed in recent history—thus creationists are wrong!

However, the truth (that we have stated many times, and is CLEARLY taught at the Creation Museum---we even have a special natural selection/speciation exhibit) is the following:

God created kinds of animals after their kinds as stated in Genesis 1. The biblical word “KIND” (Creationists call it “Baramin”—created from the Hebrew for create and kind) would be more at the “FAMILY” level of classification (Phylum, Class, Order, FAMILY, Genus, species).  Only two of each KIND (seven of some animals)—or we could say that in most instances, it was two of each land animal FAMILY (e.g., two of the dog family, two of the cat family, two of the elephant family, two of each of the nearly 50 dinosaur families).  After the Flood, as each KIND reproduced and increased in numbers and moved out over the earth—through natural selection, genetic factors, etc.—different species (and varieties) were then formed within various families.

For instance, the dog family has been studied in detail, and much information is available for the different species that are believed to have arisen from wolves.  Even recently, another article appeared on this topic stating:

Husky, shar pei, terrier or mutt, today's dogs descended from wolves that probably lived in the Middle East, not Europe or Asia as many thought, according to a study published Wednesday in the British science journal Nature.

As I often say, “Darwin was right about natural selection and right about speciation, but totally wrong that they are mechanisms to change one kind into another.  There can be great variation within a kind—but there are boundaries to each kind.  Darwin thought the changes/speciation he observed were evidence of molecules to man evolution—but he was actually looking at the phenomenal variety God created within the genetic makeup of each kind.”

It’s about time evolutionists started telling the truth about what creationists really teach.  See the Cornell University announcement on their website.

Last night I watched the first episode in the BBC/Discovery documentary TV series entitled Life, narrated by talk-show host Oprah Winfrey and sponsored on the Discovery Channel by TARGET stores.

It features spectacular photography. With its great visuals, it is really intended to subtly and not so subtly indoctrinate those watching the series in Darwinian evolution.  One press report states:

The series takes a global view of the specialized strategies and extreme behavior that living things have evolved in order to survive. Four years in the making, the series has been shot entirely in high definition.

It is sad to hear such a well known personality as Oprah Winfrey make statements like: Many statements from Oprah really make nature a god that is responsible for life.

No doubt adults and children will be attracted to such a spectacularly filmed series—but at the same time, it is a dangerous program as such a well known USA media personality, through her narration, will indoctrinate you and your children in evolution . . . and that nature is god.

At the beginning of the first program, Oprah in her narration states, “Survival has always been a struggle.” Actually, that is simply not true.  Before Adam sinned—before the whole of creation groaned because of sin (Romans 8:22)—everything (all the animals, plants—everything) was “very good.”  There was no such struggle.

It would take several pages to critique the many very blatantly evolutionary and pantheistic statements. And based upon the narration so far in this multi-part series, it appears that Oprah certainly doesn’t believe that we are actually observing a fallen world (because of sin and the curse): “For we know that the whole creation groans and labors with birth pangs together until now” (Romans 8:22).

The series shouldn’t be called “Life” but “Life In a Fallen World” instead—but then it would need completely different narration. Actually, with the current narration from Oprah, the title should be something more like: “Life from an evolutionary perspective … where nature is god.” 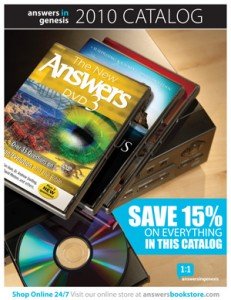 AiG’s new resource catalog is in the mail and should start hitting homes beginning today, Monday. We will also be doing some special social networking especially via Facebook to create some “viral” impact as well. See a “page flip” web version of the catalog.

Congratulations to Dale Mason and his team for producing such a professional catalog of the best of AiG resources!

(Titus 1:3)  But has in due times manifested his word through preaching, which is committed unto me according to the commandment of God our Savior

Preaching—or a confident declaration—is the method that God has chosen to manifest or reveal His word. Thanks for stopping by and thanks for praying,