We have certainly observed in recent times that those in the Christian community who compromise God’s Word in Genesis with the secular beliefs of the day (e.g., big bang, billions of years, death and disease before man, no global Flood, etc.) have become more aggressive in trying to influence the church and church leadership to compromise. It is this very compromise that has significantly contributed to the undermining of the authority of the Word of God and the collapse of the Christian worldview in our Western world in this era of history.

Dr. Hugh Ross’s progressive creation organization (Reasons to Believe) and Francis Collins’s theistic evolution organization (BioLogos) have recently had some dialogue and reached some agreements, which they report on in a joint statement. (By the way, the current president and vice-president of BioLogos are Nazarene College professors. See my previous blog posts on BioLogos.)

The statement appears at this site (stray formatting codes in their text have been removed):

We are pleased with the progress already achieved. As far as we’re aware, this is the first time in the recent history of the church when two ministries that share protestant evangelical commitments, but with divergent views on creation, have engaged in dialogue showing respect for each other’s Christian character, professional qualifications, and scholarly integrity.

Reasons to Believe (RTB) apparently didn’t tell BioLogos (BL) staff about the recent 4–5 annual, closed-door meetings of RTB staff and other old-earth creationists with Institute for Creation Research scientists, Answers in Genesis staff, and other young-earth creationists. Over the years these private meetings took place at two different seminaries in Dallas. The meetings were characterized by all the qualities mentioned above. But, says one of our representatives, the discussions accomplished very little. The young-earthers learned almost nothing new about the old-earthers’ views, whereas the old-earthers were surprised by several young-earth positions that have been public for a long time, indicating to our rep that the old-earthers had not been reading our literature as carefully as we young-earthers read theirs.

Ultimately, no significant progress was made because the young-earthers are committed to the supreme authority of Scripture, whereas the old-earthers are committed to the authority of the views of the current majority of scientists. And the young-earthers wanted to discuss the assumptions used to interpret the scientific evidence, whereas the old-earthers wanted to avoid that discussion, especially in relation to geology and astronomy and the question of the age of the creation. For these reasons these young-earth/old-earth discussions finally stalled in 2008.

We predict that RTB and BL will get on very well together, since RTB is mostly evolutionist (though not in some biological ways) and BL is 100% evolutionist. They agree on the supreme authority of the majority view in science over the authority of Scripture, and, so, they will appreciate each other’s skill in avoiding scriptural details that refute their views, taking verses out of context, and otherwise manipulating (twisting) Scripture (cf. 2 Peter 3:16 and Mark 7:6–13) to fit the evolutionary story.

They already agree in their acceptance of these evolutionary myths: the big bang; the millions of years of death, bloodshed, violence and extinction in the animal world before man appeared; the non-human status of Neanderthals and other pre-Adamite human-like hominids; the extinction of dinosaurs 65 million years before Adam; and the order in which different kinds of plants and animals appeared in history (an order which contradicts in dozens of ways the order of creation given in Genesis 1). They both reject the Bible’s clear teaching (and the belief of the church for the first 18 centuries) that the Curse in Genesis 3 affected the whole creation and that Noah’s Flood was a global catastrophic flood that destroyed all the land animals, birds and people not in the Ark. And, of course, they both feel that young-earth creationists are a serious problem in the church and our views are a huge barrier to effective evangelism.

The only thing they will disagree about is how different kinds of plants and animals and Adam and Eve came into existence—whether naturally (under divine providence, of course) through natural selection and mutations or supernaturally through separate acts (spread over the course of millions of years) of instantaneous divine creation.

There really is very little difference between their views.

Sadly, their combined efforts will continue to lead Christians astray, especially professors in seminaries and Christian universities, as these two “evangelical” organizations “graciously” and “respectfully” and with “scholarly” ability undermine the authority of the Word of God in the church. How many souls and churches will be damaged as a result? Only God knows.

If you have never been to the BioLogos website, I actually encourage you to do so and read all of their question and answer section. For those who are conservative Christians, I believe you will discern very quickly this is not just compromise with millions of years, evolution, etc., but simply liberal theology!

I have been in Nashville, Tennessee, since Saturday attending the National Religious Broadcasters Convention. I will include some photographs of our booth in a future blog. While in Nashville, I also spoke at a local Church, Donelson Fellowship. There were many visitors to both of the packed services. One man told me he came across a set of our videos while deployed in Iraq—they were stilling on someone’s desk. He said that watching these changed his life and have had a great impact on his family. Many others told me of the impact of the AiG message on their lives and families and friends.

Here are some photographs taken yesterday:

1. Senior Pastor Robert Morgan and me 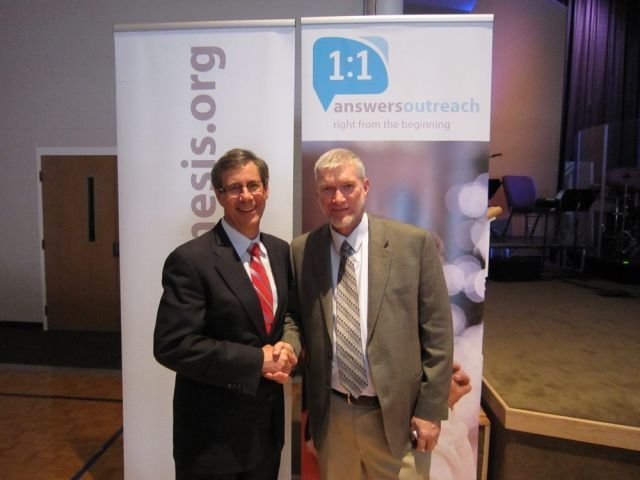 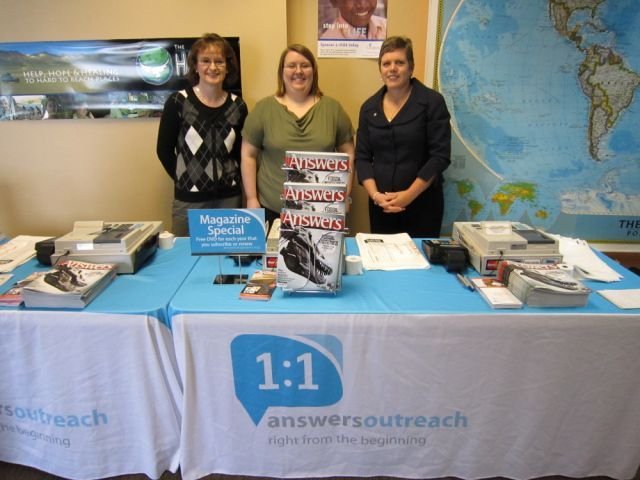 4. Different shots inside the auditorium 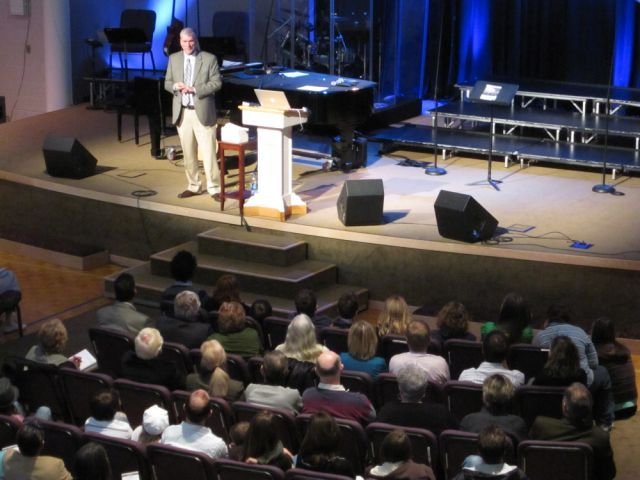 I declare unto you the gospel

(1 Corinthians 15:1) Moreover, brethren, I declare unto you the gospel which I preached unto you, which also you have received, and wherein you stand

The gospel is not just a comforting truth; it is to be declared, preached, received, and relied on as a foundation for life. Thanks for stopping by and thanks for praying, Ken

Previous Article Who Was on the Cover of People Magazine Recently? Next Article I Am Not Ashamed in USA Today