Premiere of a New Creationist Film

Over the weekend, we were honored to introduce the new film The Mysterious Islands at its Cincinnati/Northern Kentucky premiere. While I was out of town, Mark Looy, our CCO, spoke to about 1,500 people who turned out to see this excellent documentary, filmed at the Galapagos Islands where Darwin largely formed his view of evolution by natural selection.

With wonderful photography and instructive narration that exposes the bankruptcy of Darwinian evolution, this film is now carried by us as a DVD.  In our opinion it is by far the best such creationist documentary produced this year that has a strong biblical authority thrust—the message is very strong with great photography and production. If you get the video, you will note that, in the credits, two of our researchers are listed as consultants: Dr. Tommy Mitchell and Roger Patterson.

Incidentally, by a show of hands, most of the audience at the film showing had already toured our nearby Creation Museum (about 20 minutes away).

A long-time friend of the ministry, actor Kirk Cameron, visited the Creation Museum last week for the first time. He is well known for his appearances in the Growing Pains TV series—and most recently for the popular Christian film Fireproof. (By the way, the author of the book Fireproof was here at the museum earlier this month.)

Kirk visited with the pastor of an AiG-supportive church in our area, Landmark Baptist Church of Cincinnati: Pastor Matt Holman. In the photo, he is on the far left with his wife; Kirk Cameron and AiG speaker Carl Kerby are on the right side. Now, which one is the best actor here, do you think?! 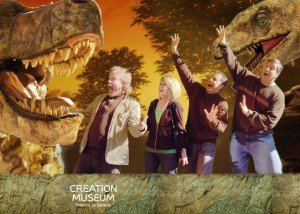 One of our employees introduced a staff member to Kirk this way: “Kirk, one of our PhD scientists used to have your posters hanging in the bedroom.” Then he was introduced to Dr. Georgia Purdom, our molecular geneticist–she used to watch his TV series back in the ‘80s and ‘90s. (By the way, Dr. Purdom is a good sport and allowed us to tell this story.)

Find out more about Kirk’s ministry outreaches (including with evangelist Ray Comfort) at www.kirkcameron.com; also, the website for the Landmark Church is http://www.landmarkcincinnati.com/

(Joshua 7:12) neither will I be with you any more, except ye destroy the accursed from among you.