A Dinosaur Book a Creationist Can Love

Here is the press release sent out this week about our new Dinosaurs for Kids book: 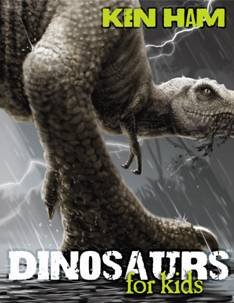 PETERSBURG, Ky., Nov. 18, 2009 – While there is no lack of colorfully illustrated books about dinosaurs for children, by and large these books talk about how many millions of years ago the dinosaurs lived, and how many billions of years old the Earth is. Many creationist parents have largely been stuck supplying these books for their dinosaur-loving children while cautioning them against the evolutionary teaching within.

Not any more, as Ken Ham, president and founder of Answers in Genesis and the Creation Museum, has just released “Dinosaurs for Kids” through Master Books, with all the great illustrations those other books have, but written from a biblical worldview.

“As a parent, and now as a grandparent, I saw my children’s and grandchildren’s fascination with dinosaurs and their desire to read every book about dinosaurs they could get their hands on,” Ham said. “Inevitably, we were all disappointed by the teaching of millions and billions of years, the claim that dinosaurs evolved into birds, and the humanistic world view presented in them.

“I determined, as a writer of creationist and apologetics materials – for both adults and children – that I would help remedy the dinosaur book situation,” Ham continued. “I couldn’t be more pleased with how the book turned out.  Wonderfully and powerfully illustrated by Bill Looney, this book will not disappoint Christian parents and their children.”

“Dinosaurs for Kids” will help to fill a void of creation-based science books for elementary age children, which has been a contributing factor to young people leaving the church as they get older. Research commissioned by Answers in Genesis and conducted recently by America’s Research Group (ARG) showed that – by and large – children are “already gone” from church in their minds by junior high and high school, because Sunday school could not answer their hard questions about origins and the trustworthiness of Scriptures.

The results from this survey were published in the book “Already Gone,” co-written by Ken Ham and ARG Founder and President Britt Beemer.  The book has been selling steadily since its release in late May, with more than 90,000 copies in print, and has inspired influential churches and church leaders across the nation to re-think how they are conducting church and Sunday school.  Dr. Charles Stanley, pastor of First Baptist Atlanta, has just written an endorsement of the book’s next edition; last month he had Ken Ham give a message based on the book at the church’s morning worship services.

The decay regarding young people often begins, Ham and Beemer discovered, with a lack of faith in the creation story of Genesis. Children tend to separate the “stories” of the Bible from the “hard facts” taught in almost all public schools about evolution and the age of the Earth. They look to their secular textbooks for answers, not the Bible.

Now, with the release of “Dinosaurs for Kids,” parents and teachers alike will have a new resource for helping children understand their beliefs about origins in a scientific context. These kids can once again embrace their love of dinosaurs, and their teachers and parents can encourage those discussions in a biblical context.

“Dinosaurs for Kids” includes full-color illustrations throughout, with an easy-to-understand timeline of dinosaurs’ true history from creation to the most recent discoveries—and convincing evidence that they did not die out 65 million years ago. It explains how the Flood affected the dinosaurs, when and where dinosaurs existed, how fossils like dinosaur skeletons are made, and why they are found all over the Earth. A recurring theme is the difference between biblical history (God’s revelation) and  assumptions by fallible secular scientists.

Recommended for ages 7-12, the 64-page, hard cover, 8 ½ by 11 book retails for $14.99. Published by Master Books, “Dinosaurs for Kids” is available at Christian bookstores everywhere, or online www.answersingenesis.org.

Photo of the Week

The photo below was taken at Northland International University in Wisconsin this past Thursday after I had finished 3 major sessions (over 5 hours of presentations) to students, faculty and public. 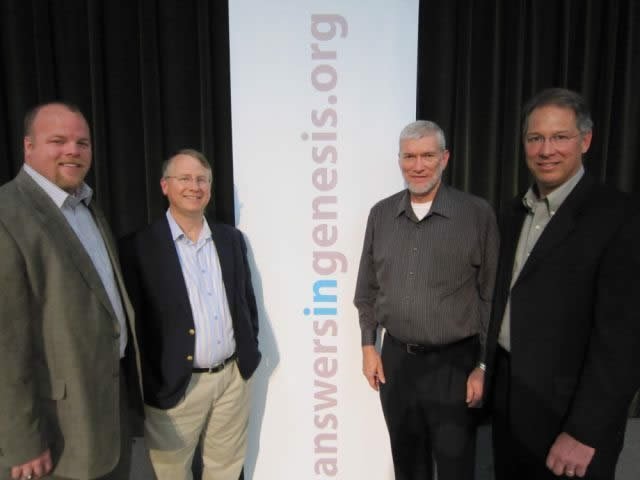 The reason I chose this as the “photo of the week” is because it is so thrilling to me to see an academic institution so committed to the Word of God and taking  a stand on a literal creation, as all Christian universities should.

If you are researching creationist Christian universities (and there are very few), I encourage you to check out Northland International University.