Admissions of an Evolutionist

A blogger who attended the paleontology conference in Cincinnati recently and also visited our nearby Creation Museum with the group of secular scientists, wrote in his blog report:

The second point was that you shouldn’t underestimate the argument from personal incredulity. Evolution is genuinely counter-intuitive, and it is not crazy to cast a skeptical eye on the idea that complex, functional adaptations can form by a fully naturalistic process like natural selection. It is difficult to convince people even that evolution is reasonable, much less that it is true. I mentioned my experience at the Creation Museum the day before.

I agree. Evolution is counter-intuitive. Besides the fact that the knowledge of God is written on our hearts (we all know there is a God—even though many suppress this truth, as Romans 1 tells us), we all recognize the evidence of design. It is so obvious that life was designed by higher intelligence (as Romans 1:20 declares—that is why we are without excuse). And, of course, observational science does not support the molecules-to-man idea.

that there is far more religious diversity among anti-evolutionists than you might expect. This has been brought home to me especially at ID conferences, where Biblical literalists often seem thin on the ground.

. . . At this point I noted that if there were any super-clever way of countering creationism we all would have done it by now. I said I didn’t have any snappy solution to offer, and endorsed the more mundane suggestions others had made before me (be aware of what is going on in local politics, that sort of thing.)

This is a very good point. There is nothing that evolutionists can parade in front of all through television, radio, magazines, and so on that will prove once and for all these creationists are wrong and Darwin was right! NOTHING!

Now these same scientists could easily prove to all that magnesium has certain properties and reacts with acids in certain ways—because one can observe such properties and test them over and over again. And that is the point. One can illustrate natural selection and speciation—one can show bacteria becoming resistant to antibiotics—but an evolutionist cannot show how one kind (usually at the family level of classification) of animal could change in to a totally different kind  (speciation within a kind is not molecules to man evolution.)

Evolutionism is a religious dogma secularists adhere to—it is their religion to explain life without God. Those Christians who compromise with evolution are no different than the Israelites who incorporated the pagan religion of the age into their religion, thus undermining the authority of the Word of God!

We’ve Been to India (Kind Of)

Mally and I arrived home Sunday after three days in New Jersey, where I spoke to a conference attended mostly by people who are originally from India. We ate Indian food each meal—and we had to get used to listening to people speaking to us with Indian accents—so, we feel like we’ve been in India for three days! (I wonder if they had trouble with my Australian accent!)

It was a most enjoyable conference with tremendous responses from the participants. I have enclosed a photograph of Dr. Joseph Paturi and me, president of Temple Baptist College in Cincinnati, at the conference. Dr. Paturi has helped organize this and similar conferences across the USA and was the one who invited me to be the keynote speaker. 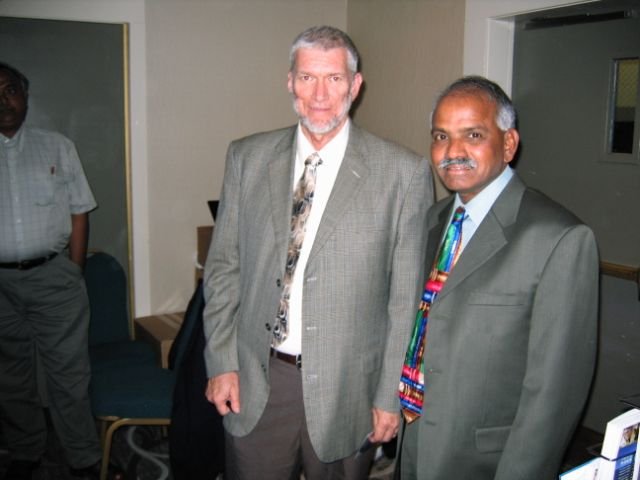 At this conference, Dr. David Crandall (AiG’s Director of WorldWide outreach) and I also handed a set of masters of the videos of my six talks done in India last year that were translated into Telagu. I believe these DVDs will be copied by the thousands in India, and we pray they will reach many people with the truth of God’s Word and the gospel.

(Exodus 18:3–4) And her two sons; of which the name of the one was Gershom; for he said, I have been an alien in a strange land: And the name of the other was Eliezer; for the God of my father, said he, was my help, and delivered me from the sword of Pharaoh:

As followers of the Lord Jesus Christ, we are aliens in a strange land of ungodliness, but we live by constantly leaning on Him as the God of Abraham, Isaac, and Jacob.