The Ultimate Proof of Creation

Last night, a printer bound thousand of copies of the new book Already Gone (a shock and challenge to the church), and also bound a new exciting book by Answers in Genesis’s Dr. Jason Lisle called The Ultimate Proof of Creation which refutes logical errors in evolutionist thinking. Both will arrive in our warehouse this Wednesday.

Dr. Lisle (PhD Astrophysics) wrote this about his new book:

Have you ever heard evolutionists say things like this? “Evolution vs. Creationism”, “Why are creationists against science?”, “Nature has designed some amazing animals”, “Creationists do not believe in evolution, but we see evolution happening all the time”, or “Do you believe in science or do you have faith?” Now what do these quotes all have in common? Answer: they are all logical fallacies. Each one of these sentences or phrases contains an error in reasoning. I have found that proponents of evolution and “millions-of-years” commit logical fallacies quite frequently. Their arguments simply do not stand up to rational scrutiny. 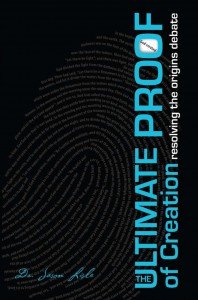 But that’s not the really sad part. I suspect that the main reason that logical fallacies are so common in evolutionary arguments is that we creationists have been letting them get away with it! Most creationists do not know how to identify logical fallacies, and thus cannot refute the errors in evolutionists’ arguments. Let’s take a look at a few of the fallacies above. “Evolution vs. Creationism” is a type of logical fallacy called a question-begging epithet. This is where a person uses biased language instead of logic to argue his point. In this case, by putting “ism” on the end of “creation”, the author implies that creation is just a belief whereas evolution is not. But this is simply not so.

“Nature has designed some amazing animals” is a logical fallacy known as reification. This is where concrete (in this case personal) characteristics are attributed to something abstract (in this case “nature”). Nature is simply the name we give to the sequence of events in the world. Nature is not a person and cannot literally design anything at all. “Do you believe in science or do you have faith?” is a fallacy of bifurcation – presenting two options as if they were the only two and mutually exclusive when this isn’t the case. I believe in the methods of science and I have faith in God. In fact, I would say that the reason I believe in the methods of science is precisely because I have faith in God. It is the biblical God that makes science possible by upholding in the universe in a consistent way that the human mind can discover.

Chapters 7 and 8 of my latest book “The Ultimate Proof of Creation” will show readers how to identify and refute the most common errors in evolutionary reasoning. This is such an important aspect of defending the Christian Faith, and yet it is so frequently overlooked. It is really not difficult at all to learn to spot logical fallacies. And you will find that it is life-changing as you begin spotting fallacies not only in evolutionary literature, but in television commercials, advertisements, and everyday conversions. Such knowledge is also good for keeping us from making mistakes in logic as well! These two new very powerful books can be ordered through AiG’s webstore.

Yesterday, I was privileged to speak to a conference of hundreds of pastors and Christian leaders organized by the Family Research Council in Washington, D.C. The message I presented was centered around the “Relevance of Genesis” and the vital information published in the new Already Gone book (available at AiG’s Website). Not only was there a great response to the resources, but a number of influential pastors asked me to speak in their churches as soon as my calendar allows it.

I have included a photograph taken yesterday morning at the conference:

I was also interviewed by the Family Research Council for a video they are producing: 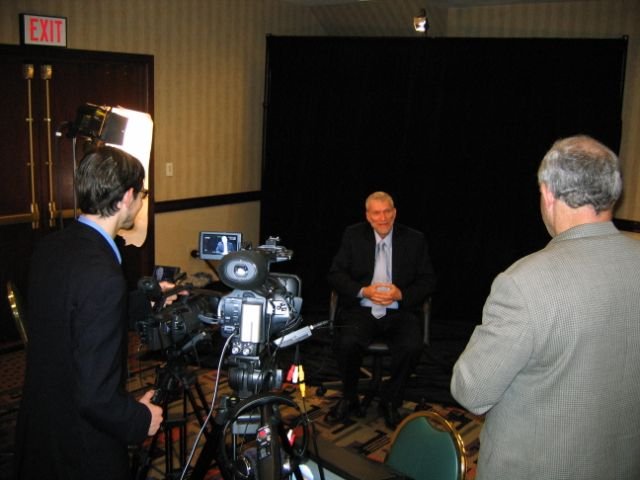 Also, thanks to staff members Perry Petrushko and Jim Stiles for all their hard work in driving over to DC (about 10 hours each way) and setting up and manning our booth at the conference: 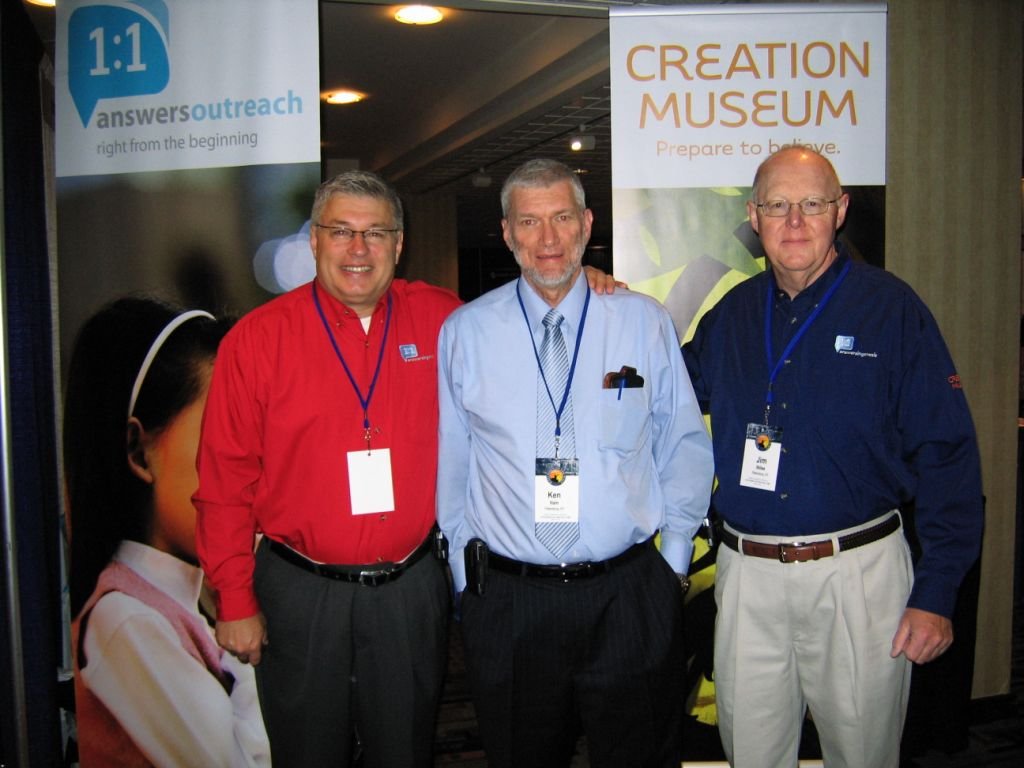 There's been a lot in the news and on our website this past week about the so-called “missing link” Ida.

On Monday, I spoke to large group of ministry supporters and friends following their participation on a different kind of links—the golfing kind—at our annual Creation Museum Missing Links Golf Classic. 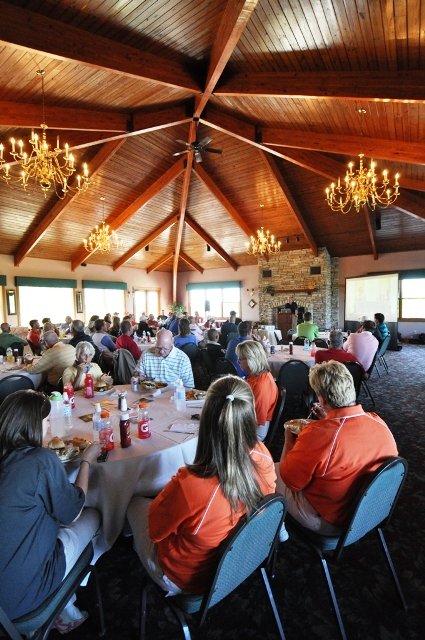 The outing helped raise funds for new exhibits at the Creation Museum and provided supporters an opportunity to invite their pastors and friends to play golf and hear a presentation from me.

I spoke about the shocking statistics revealed from the research presented in the new book Already Gone to be released next week. Afterwards, a youth pastor in attendance sent us this note: "the information from Ken Ham was phenomenal. Thank you for the invitation as we thoroughly enjoyed every aspect of this well planned outing. I look forward to partnering with you in the future."

Former NFL star and Hall of Fame member Anthony Munoz, a supporter of Answers in Genesis who helped promote the golf outing, presented me with an autographed football. Of course, being an Australian, I couldn’t help myself and made some comment about Rugby and Australian Rules and ‘real’ football!! Here is a photo of Anthony presenting me with the football: 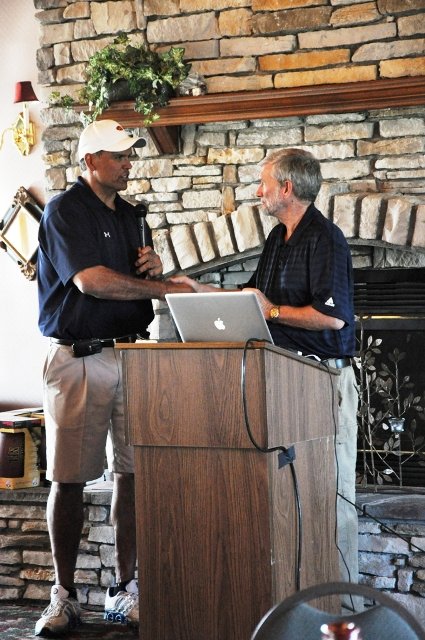 This weekend is the second anniversary of the opening of the Creation Museum. Monday will be the official two-year anniversary. Here is a press release AiG sent out about this exciting anniversary: 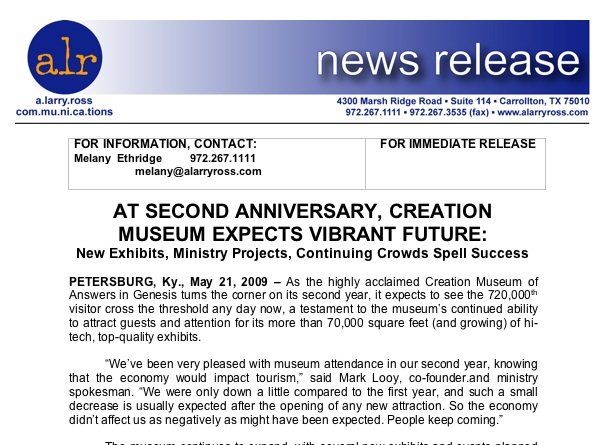