Read Her A Is for Adam Until She Died

This week I heard a testimony from a couple that I just had to share with you all. I met this family in the Creation Museum during a meet and greet time. They gave me a photograph of their daughter "reading" our Answers magazine. As we talked, they then told me about their eldest daughter who died at nine months old. I asked them to send me an email explaining some of the details that involve Answers magazine and the book A is for Adam. Here is what Richard and Katherine wrote:

Thank you so much for taking the time to speak with us yesterday. We greatly appreciate the book and DVD you gave to us; thank you for your kindness in thinking of us. We thoroughly enjoyed our visit and are very glad we got two-day passes; we will be enjoying another visit today. It was definitely worth the 11 hour drive it took to get here! Attached are two pictures of our precious Jessica “reading” our Answers Magazine. 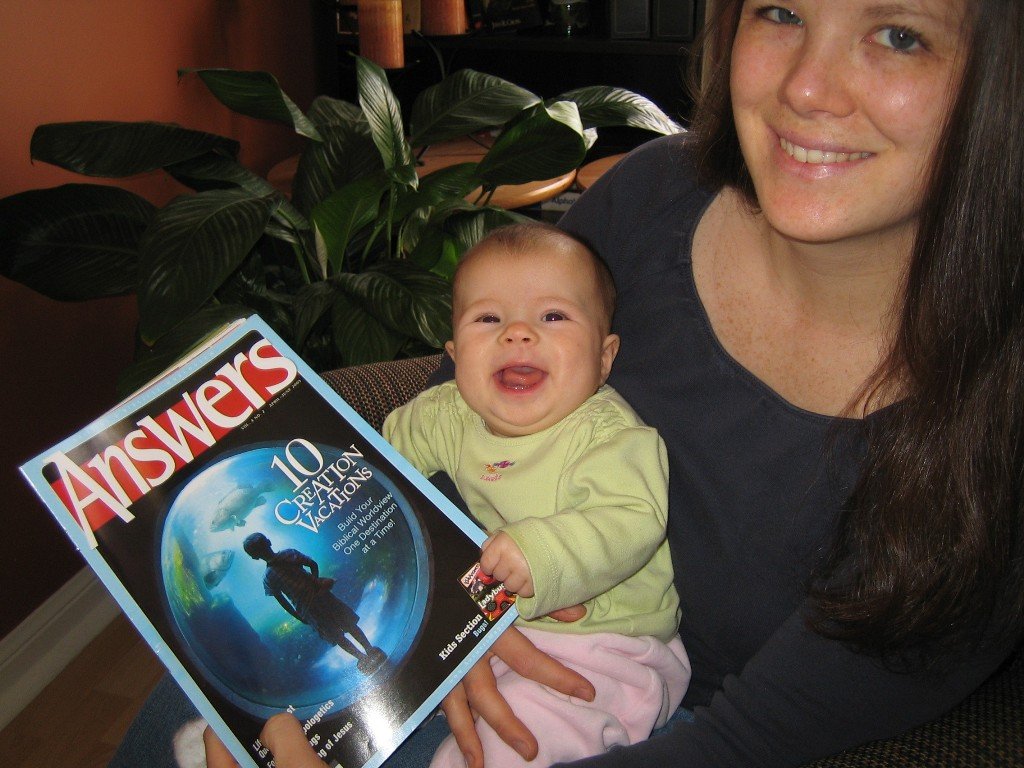 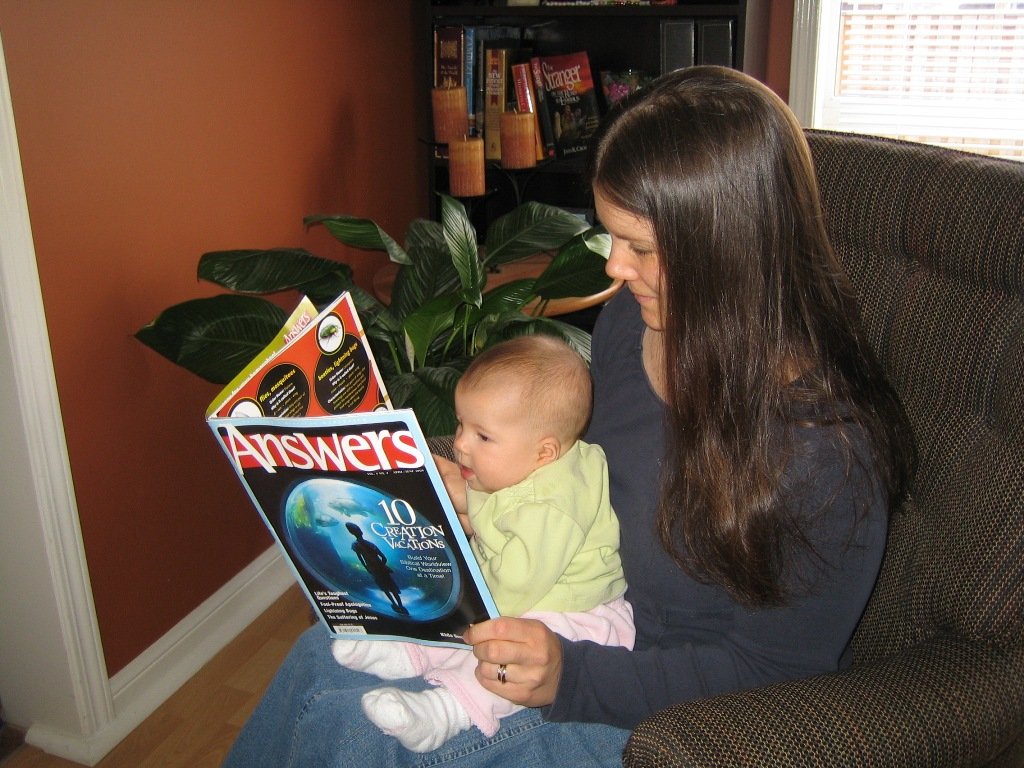 This [reading of Answers magazine] started with Elysha, our eldest daughter. Because of her heart condition, we couldn’t take her anywhere, except the hospital, so we brought the world to her. The colorful pictures really grabbed her attention. We also read "A is for Adam" to her every night until the day she died. We do the same with Jessica. 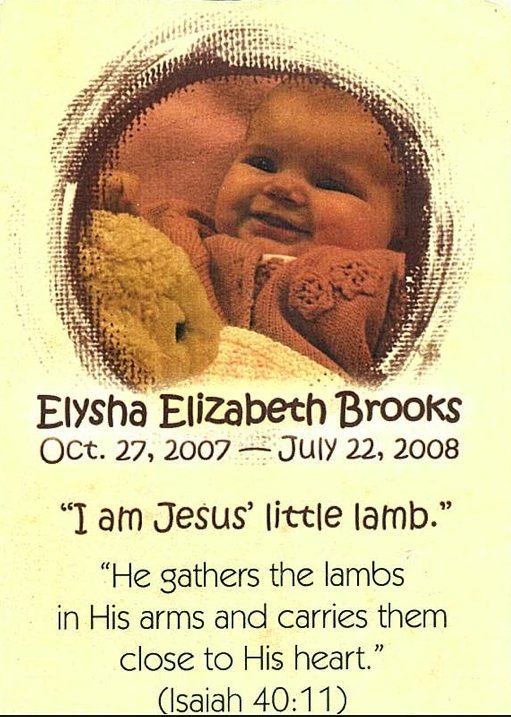 As we mentioned yesterday, Jessica is a fourth-generation Answers in Genesis supporter starting with her 95-year-old great-grandfather! By the way the "complete" story of our daughter, Elysha, can be found on our website: www.rnbrooks.com. There is a lot of material there . . . but we wanted it to be a testimony to God’s grace and hope amidst sorrow. Transcripts and audio of the funeral where God gave us strength to share the gospel and to sing (In Christ Alone) can be found there too.

I praise the Lord for people like Richard and Katherine who, despite devastating circumstances in their life, stand so solidly on God’s Word. What an example they are for all of us.

Who Is Really “Freaking Out”?

God-hating PZ Myers, an associate professor at the University of Minnesota, Morris, in an attempt to put the best face on the farce over evolutionists who attempted to gain notoriety by an outlandish claim about a fossil (Ida) being evidence of an evolutionary link in human evolution, has tried to deflect criticism to creationists. He wrote a blog item entitled "Creationists freak out over Darwinius." He included a section about Answers in Genesis:

Creationists freak out over Darwinius .&nbps. . . How are the creationists reacting to the discovery of Darwinius masillae? With denial and outrage, of course, but one thing that is an interesting datum is that they are all responding to the extravagant hype surrounding it. The fossil is important and has a significant place in the evolutionary record, but the way its purchasers and the media have described it with overblown rhetoric has actually damaged public perception. It’s an interesting transitional form from an early point in the history of primates, and the sloppy media coverage had people expecting a revivified Fred Flintstone carrying a video camera that had been left running for 47 million years. .&nbps.&nbps. Answers in Genesis belittles the whole find. It’s only an “extinct, lemur-like creature” that doesn’t even look like a chimpanzee. They also focus on the hype that has annoyed so many of us, citing that horrible Sky News report that claimed "proof of this transitional species finally confirms Charles Darwin’s theory of evolution" (how anyone could have written that phrase and still claim to be a science journalist is a bit of a mystery—it’s so bad, it’s not even wrong.) Oh, and its preservation is evidence of a global, catastrophic flood.

Well you can read AiG’s first response to this supposed "missing link" claim and see if we really did “freak out.” Actually, unlike PZ Myers and other blind faith secular religious zealots, AiG published a very carefully reasoned and researched (using the available literature) critique.

In fact, many evolutionists are quite obviously embarrassed by the claims, and now the quotes from such people are coming in thick and fast. For instance:

Philip Gingerich (coauthor on the paper):

There was a TV company involved and time pressure. We’ve been pushed to finish the study. It’s not how I like to do science.1

[Gingerich’s quote] rings all sorts of warning bells. It’s nice it has fingernails, something we have, as do most primates . . . but they’ve cherry-picked particular character[istics] and they’ve been criticized (by other scientists) for doing that.1

On the whole I think the evidence is less than convincing. They make an intriguing argument but I would definitely say that the consensus is not in favor of the hypothesis they're proposing.2

The PR campaign on this fossil is I think more of a story than the fossil itself. It’s a very beautiful fossil, but I didn’t see anything in this paper that told me anything decisive that was new.2

It’s not a missing link, it’s not even a terribly close relative to monkeys, apes and humans, which is the point they're trying to make. They’ve ignored 15 years of literature. I would be absolutely dumbfounded if it turns out to be a potential ancestor to humans.2, 3, 4

Their claim that this specimen should be classified as haplorhine [an ape precursor to humans] is unsupportable in light of modern methods of classification.3

There is no phylogenetic analysis to support the claims, and the data is cherry-picked.3 [The media hype was like] Barnum and Bailey.5

[I]t can now be said the findings may well have been significantly overstated. We won’t know for sure until further research is done. But if this event causes the public to distrust science and media, that distrust is well placed.5

AiG now has a second follow-up response to the media frenzy surrounding Ida, available on our website. Really, evolutionists have done themselves a disservice by making claims that were obviously not true concerning this fossil being a "link" in the supposed evolutionary chain of humans. Maybe they will think twice before making such assertions next time. But then again, we’ve seen them make such claims over and over again, only to have them rejected later on.

Devotion: Crystalizes down to

(1 Corinthians 2:2) For I determined not to know any thing among you, save Jesus Christ, and him crucified.

We do not have a religion with a set of amorphous traditions on center stage, but all our hope and focus crystallizes down to one Person, the Lord Jesus Christ.

Thanks for stopping by and thanks for prayers,
Ken