Last Monday, yet another international TV outlet toured the Creation Museum. A three-member crew with NHK---the largest TV network in all of Japan, we understand---toured the museum and interviewed Patrick Marsh, our chief museum designer. It just so happens that Patrick lived in Japan for more than ten years before joining our staff. He felt, though, that his Japanese was too rusty to do the interview in that language, so he just stuck with English!

NHK stands for Nippon Hōsō Kyōkai or the Japan Broadcasting Corporation, and is similar to America’s PBS-TV (but with a much larger audience per capita in Japan, we hear). It also operates a radio service. Here is a link to the English-language website of NHK: www.nhk.or.jp/nhkworld/

In the past 16 months since the museum opened, we have had several representatives of Japanese newspaper and TV outlets visit us (e.g., see AnswersInGenesis.org/articles/2007/12/28/media-year-in-review ).

In the photo, you can see Mr. Tsuyoshi Masuda, the correspondent (who is based in Washington, DC), being recorded by Mr. Torao Kono. The producer, Mr.Takeshi Yamasaki, was working behind the scenes. 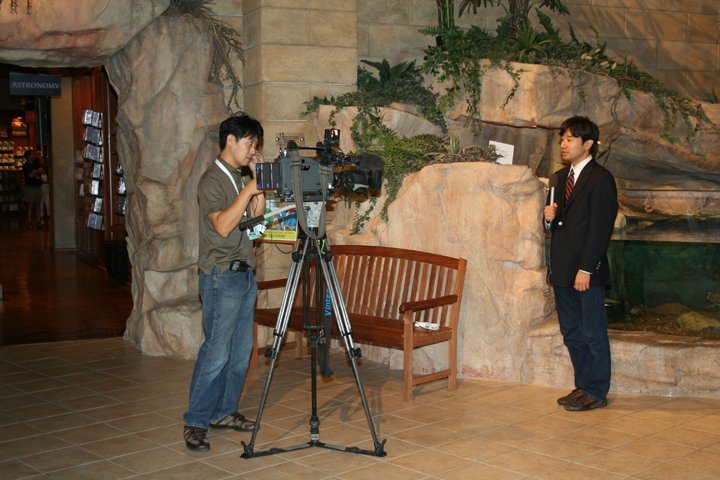 Terry Mortenson of our staff is on a speaking tour of eastern Europe (Hungary and Serbia), and will soon be in the Netherlands. Here are excerpts of a report he sent to me Friday:

Yesterday was a long but profitable day.

Hungary is a headquarters for many missions working in Eastern Europe. From my past experience of living in Hungary, I am quite certain that many of those missionaries are compromised with millions of years.

Last night I spoke in a Hungarian Baptist church. Evangelical churches are very small in Hungary, which is a very secular country -- with a Catholic and liberal Protestant influence. With the growth of economic affluence since the fall of communism, it is a very hard place to minister the gospel. For the lecture, about 45 people came from several churches, which to the organizers was encouraging. I lectured for about 1 ½ hours through translation and then took questions for about 45 minutes, which most of the people stayed for. A couple people came and told that it was a very helpful evening. I know there were also some non-Christians there, and I was able to make the gospel clear at the end of my talk.

Today I spoke to some of the 200 students at the 10th annual conference of the Association of Christian Schools International for student leaders. Student counsel leaders were present from 38 Christian schools in 15 countries, including Jordan, Russia, Kazakhstan, Germany, Norway, Spain and many Eastern European countries. So these are some very key and sharp kids—leaders who will no doubt grow in their influence as they mature.

Attached are photos (sorry, my camera is not the greatest): 1) the ICSB elementary school kids I spoke to in chapel, 2) the Hungarian church Thursday night.. 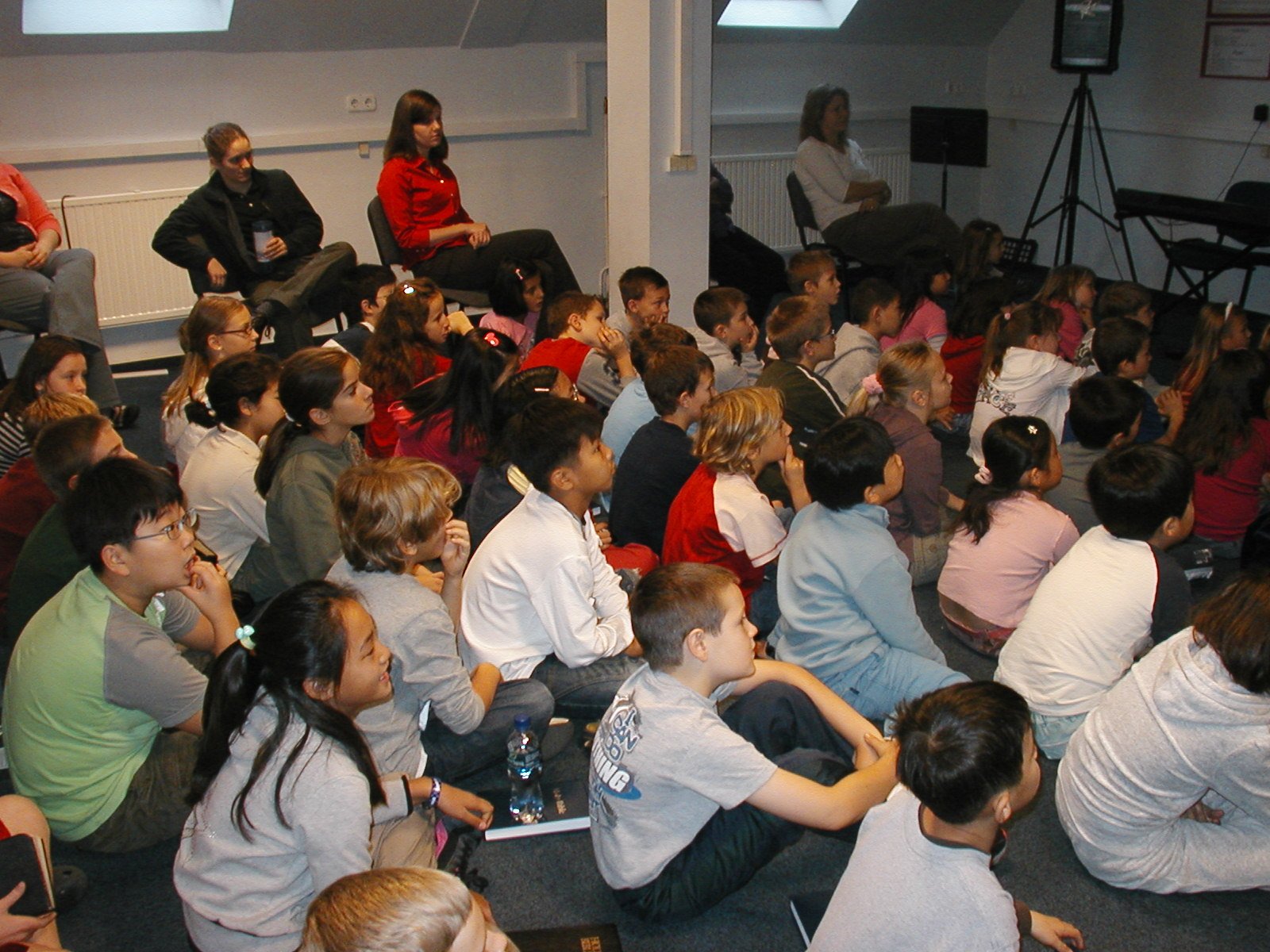 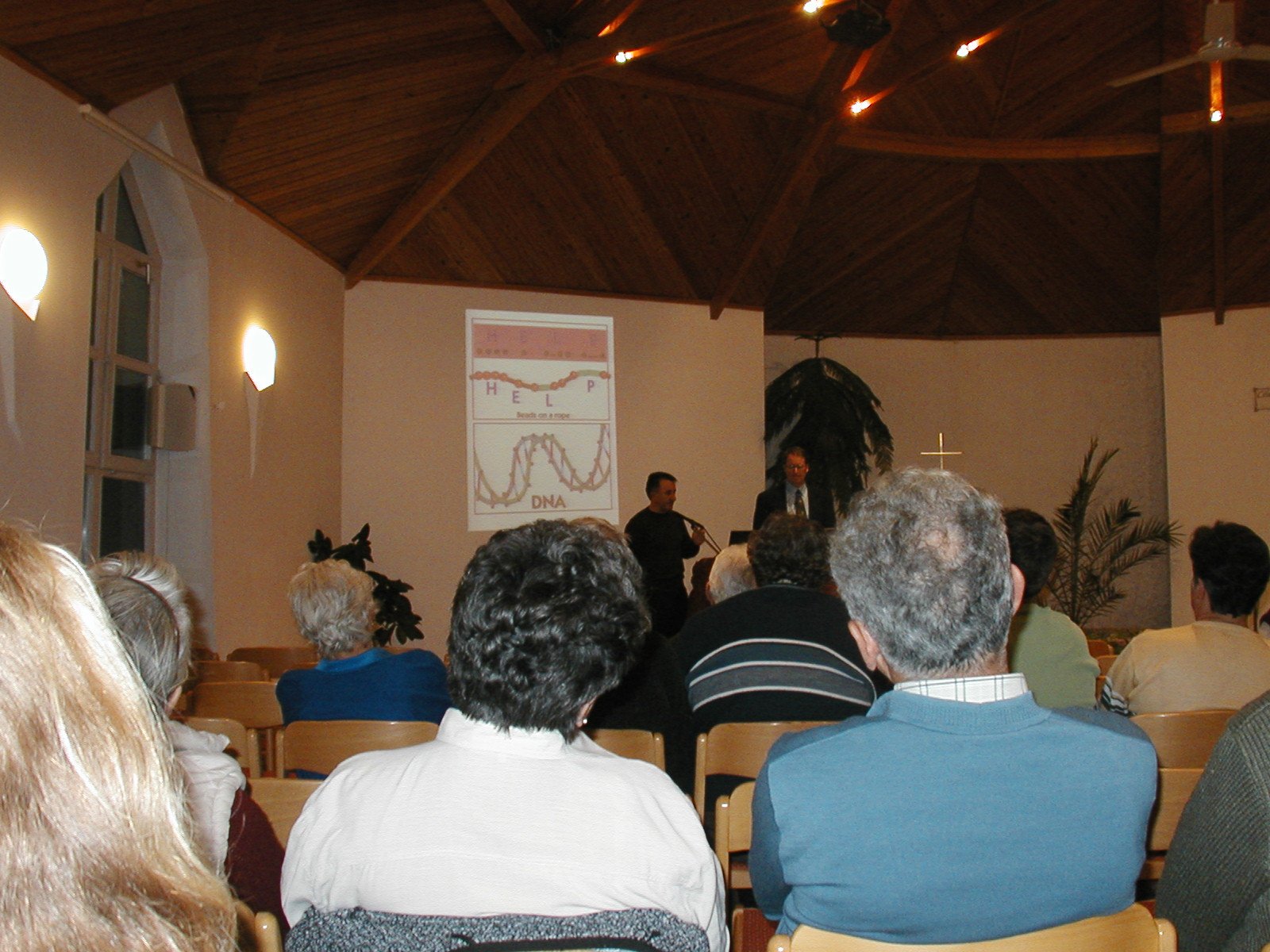 I leave Monday morning for the airport to fly to Holland, where I will “hit the ground running.”

Please pray for continued strength. My knee was tight after being on it all day yesterday, but I don’t have any pain and almost no limp.

May God bring those Hungarian non-Christians who heard me Thursday night to a saving knowledge of Jesus Christ. Only God can change hearts, so we must pray. Thank you for partnering with me in prayer.

In the battle for truth,

Terry Thanks for stopping by and thanks for praying.

Previous Article Alumnus of the Year Next Article Serbia and Beowulf