We not only see visitors from across the USA, Canada (in increasing numbers), Europe, Japan, and so on—but we have been seeing many more people coming from Australia. The news about the Creation Museum is spreading (though slowly) in my home country. This past week we had two great reports about Australian visitors. The first one is from a lady from New South Wales who brought some friends to visit the Creation Museum.

My Australian friends were literally “blown away" with the whole place. They only had time to see it for a rushed 2 hours, but in that time … the father, and his son … could not believe how good it is and are telling everyone …The walk through the Seven C's of History was able to sway the others and the Men in White theatre finally convinced them that what I was telling them on the way was in fact correct. The talk of millions of years just disappeared and they were convinced of the truth of God's Word in only a 2 hour visit!!!! [The Father] … said that everyone should see it in their lifetime and will tell everyone he meets here in Australia. I just love good news like this!

The children [I teach] are so excited that I have returned and can't wait for my Power-point presentation of my Museum visit. I have 3 folk from our church wanting to visit next year when their son goes to the USA to study. I will attach one of the photos of my "Creation Room"at our church. I called in a couple of young children after church to have in the photo. I am so keen to make this so much bigger and better . Hope to see you again in the future when I return to your magnificent country. Margaret.

Margaret sent us some photographs of her “Creation Room”—you will see AiG literature all over this room! What a praise that AiG resources are getting into Australia to be used in leading children to Christ. We have been in contact with her and will be helping her get more AiG resources into Australia so she can reach children with the creation/gospel message. 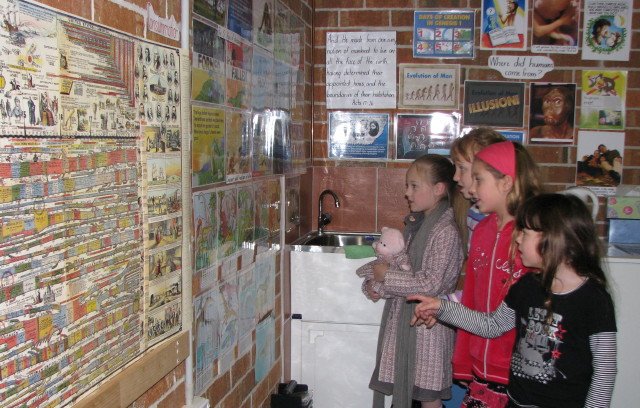 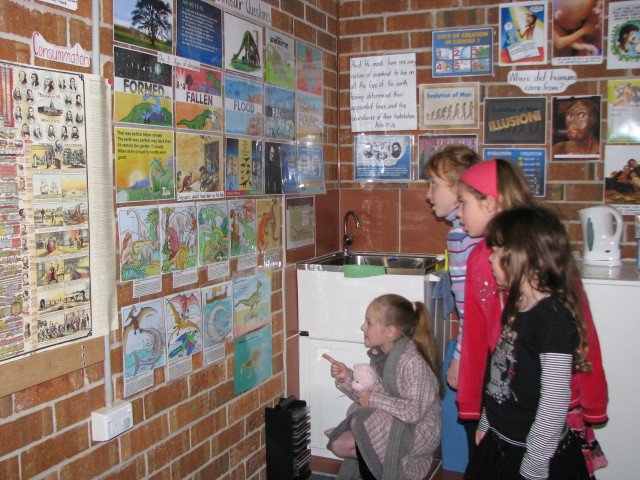 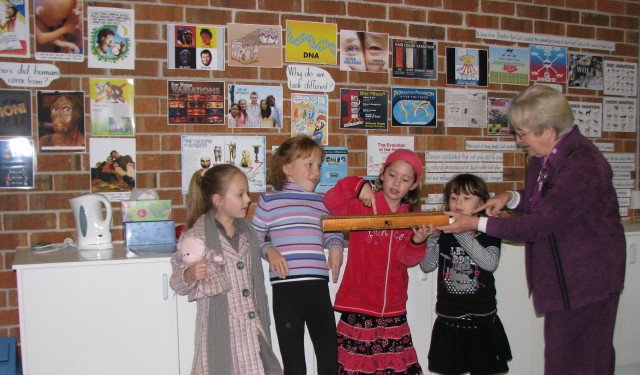 Recently, some dear friends from the country town of Dalby (2 and half hours west of the city of Brisbane, Queensland) visited the Creation Museum. Dalby is the town where I received my first teaching appointment at Dalby State High School. Some of the best friends we have ever made live in Dalby. When these friends who visited the Creation Museum returned home, they were interviewed by the local newspaper. I have included a scan of the write up about the visit to the USA and the Creation Museum. The paper of course was interested in the fact that I have a Dalby connection. I have included a scan of the article so you can read it for yourself.

Praise the Lord that the news about the Creation Museum is being spread by secular newspapers—even if the Christian world by and large is not advertising the Museum in my homeland! 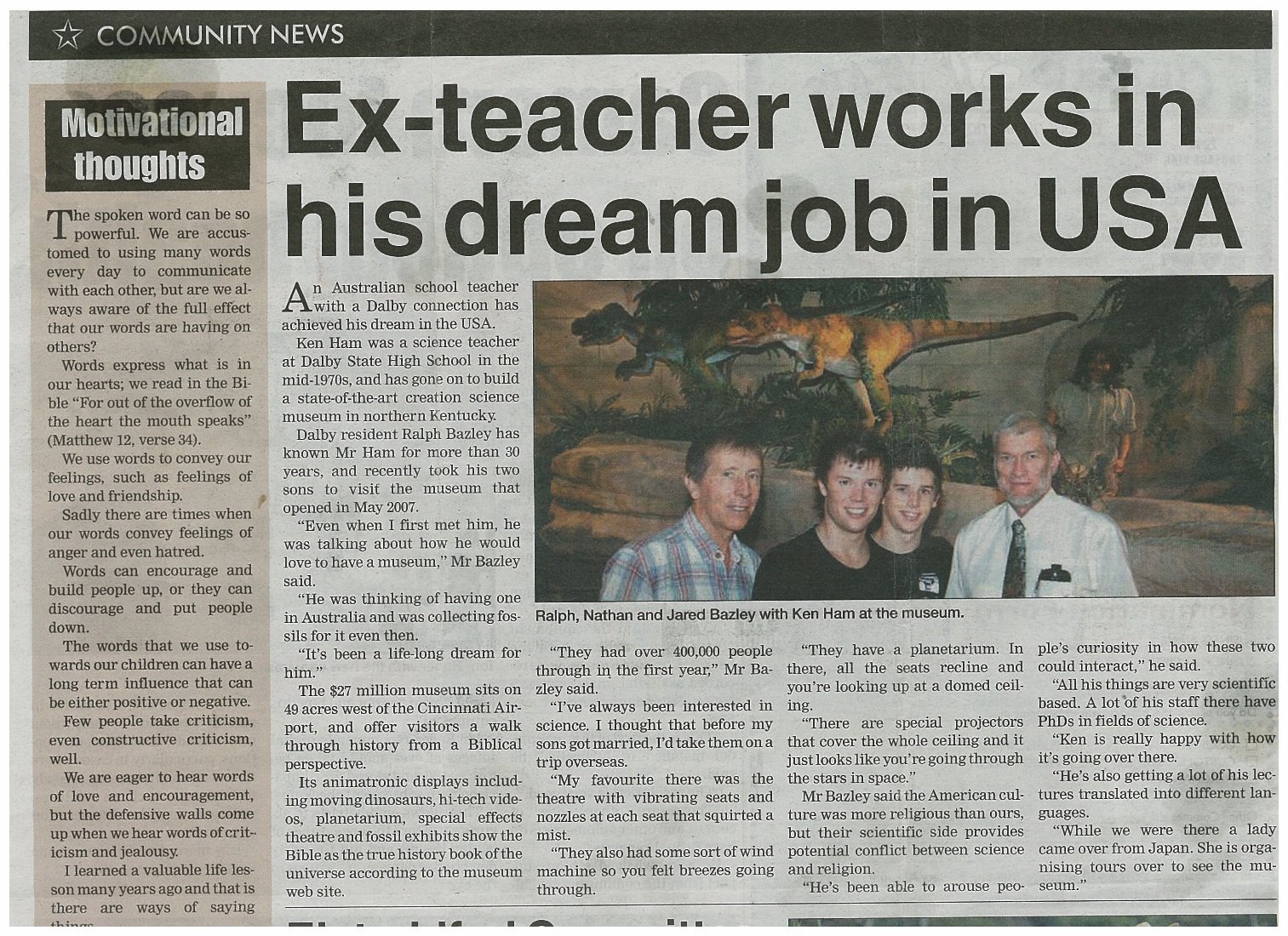 We had a group visiting the Creation Museum yesterday that were 4 generations strong. They came from Pennsylvania, Ohio, Indiana, and Idaho. The great grandparents, the Lapp’s, have been married 65 years and the grandparents, the Bontrager’s, for 38 years. They had gathered with their children (Troyer and Bontrager families) and grandchildren to celebrate grandpa’s birthday which was in June. I have included a photograph of the entire group! What a blessing that must have been for all of them to be able to come as a family of four generations and spend the day at the Creation Museum. 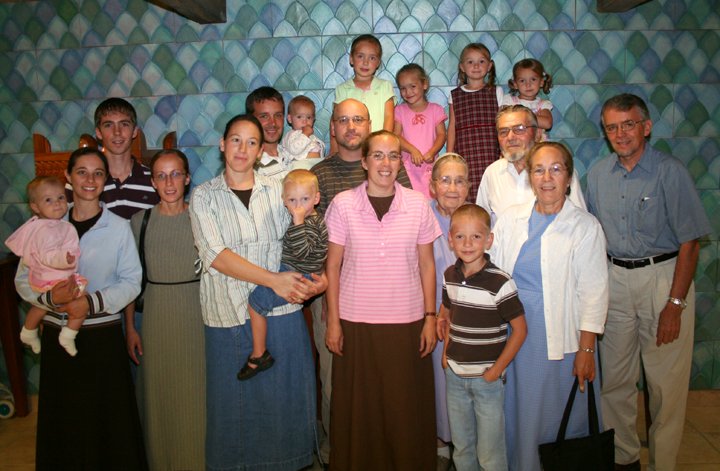 I will be speaking at Idlewild Baptist Church, Lutz, Florida (near Tampa), for both services Sunday morning (around 6000 people). I will be giving the same message at each of the two morning services. You can find out details from the AiG website events calendar.

(2 Sam 12:13) And David said unto Nathan, I have sinned against the LORD. And Nathan said unto David, The LORD also hath put away thy sin; thou shalt not die.

The sacrificial death of the Lord Jesus Christ is so powerful that all any sinner has to do to be saved is to bow his heart, confess his sin & trust in that sacrifice. Thanks for stopping by and thanks for praying