As well as the overwhelming positive responses (including many salvation testimonies) AiG receives, we do also get our share of scoffers. I thought I would share a few incidents that occurred this week and other information about some of the scoffers of the AiG/Creation Museum ministry.

2. On Friday, two men from Indiana started passing out tracts in the Museum, attempting to tell all our guests about a person who supposedly is Christ and is living and walking around us—they were quite obnoxious. After being confronted, they eventually left but said that God will judge us because of what we are doing!

3. Remember the Defcon group who organized a rally against the Creation Museum when it opened just over a year ago? They were the group that hired a plane to fly a banner across the museum for a few hours stating: “Thou shalt not lie.” They also had some very “academic and scientific” placards at their rally outside the museum when it opened with statements like: “Behold the great fence of the Hamites,” and “Receive the Curse of Ham across the street,” and so on! Well they are now selling bumper stickers and Tee-Shirts. I have included the two bumper stickers for you to see (the same messages are on their Tee-shirts). As you can see, once again, this group that was headed up by a university professor is making some very “scientifically sound,” and “very academic” statements against the Creation Museum! The bumper stickers: 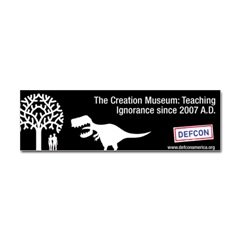 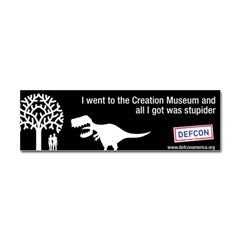 At least they acknowledge the year of our Lord in this one with the “A.D.” reference! Once they realize what they’ve done, I’m sure they will delete the “A.D.” part.

4. And Remember Bill Maher from HBO and the TV program Politically Incorrect? His group did not tell the truth to gain media access to the Creation Museum and then he himself disobeyed our security protocols and illegally gained access to AiG offices to interview me. Well, we checked the Apple web site for new movie trailers as we do from time to time to see what's coming and what AiG might want to be ready for. Bill Maher’s “comedy” movie called Religulous will be released in October where we are sure he will use footage from his illegally obtained access to AiG and the Creation Museum. They claim “the documentary RELIGULOUS follows political humorist and author Bill Maher (Real Time With Bill Maher, Politically Incorrect) as he travels around the globe interviewing people about God and religion. Known for his astute analytical skills, irreverent wit and commitment to never pulling a punch, Maher brings his characteristic honesty to an unusual spiritual journey.”

Of course we know Bill Maher’s main purpose is to mock Christianity and mock God. But, we have a loving, gracious, Holy, and patient God who judges righteously—and who will have the last say in all of this.

Other Interesting things that have recently happened:

To top our day off on Friday, we were wondering why 20 or more University of Cincinnati students were coming in and out of the museum at a very fast pace, until we found out that the Creation Museum was part of one of their student organization’s “scavenger hunts”—one of the clues led them to the Creation Museum and they had to have proof they were here.

The New York Times last week published an article, so typical of what one often reads in newspapers like it, that misrepresents the creation/evolution battle and tries to falsely caricature what creationists are doing and saying.

In lieu of our normal Friday feedback feature on our website, we thought a response to a recent New York Times piece was in order. The article appears to be an effort to foment outrage against teaching the “strengths and weaknesses” of evolution in Texas public schools, framing the creation-evolution controversy as a battle over censorship. That is, creationists (and any who believe that the universe is created) are out to keep children from hearing about Darwin’s dangerous idea. However, when we take a closer look at the Times’ arguments, we again find a basic lack of understanding concerning the issue over origins.

Opponents of teaching evolution, in a natural selection of sorts, have gradually shed those strategies that have not survived the courts. Over the last decade, creationism has given rise to “creation science,” which became “intelligent design,” which in 2005 was banned from the public school curriculum in Pennsylvania by a federal judge…

No major creation organization (e.g., AiG, ICR, CRS) would oppose children learning about evolution. In fact, as Christians, we have an obligation to teach our children about evolution, since they will encounter it from TV shows, books, and museums. The author might be surprised to learn that the more than 400,000 visitors to our Creation Museum have been shown the teachings of evolution right alongside the biblical account. We believe that the best way to equip Christians is by showing them what skeptics think about the past, life, and the nature of the universe. The Apostle Paul said that he became “all things to all men, so that [he might] by all means save some” (1 Corinthians 9:22). In the same way, Christians need to learn what the world teaches so that we can show those who don’t believe in Christ how the Bible makes better sense of the facts.

I encourage you to read our entire article at: http://www.answersingenesis.org/articles/2008/06/06/feedback-teaching-evolution

Today Mally and I will travel to Huntington West Virginia where I will speak four times tomorrow in Grace Gospel Church. You can obtain all the details at: http://www.answersingenesis.org/events/details.aspx?Event_ID=6128

Shouts of excitement sound out at sporting events & no one objects, but, if heart & soul passion is expressed to God that’s called religious emotionalism. Thanks for stopping by and thanks for praying

Previous Article Chimp Now on Display in Garden of Eden Next Article Question: Which College Is Doing This?