How God Is Using AiG to Reach People in Costa Rica

This is a fascinating story of how one of our books, followed by a seminar, an Australia tour, AiG speakers, and personal contact has led to a major outreach in Costa Rica. Follow this through and see the wonderful hand of God on one family; all the events associated with AiG have led to a major outreach to a Spanish speaking country. I trust the example of this one family will encourage all of us—and challenge all of us concerning the difference we can all make in the world for the Lord!

Scott and Pam Trochim came on the Australia tour with Mally and me a number of years ago. (Mally and I used to take about 30 people each year on a tour to Australia). Scott and Pam visited the Creation Museum this week, and after talking with them and finding out how the Lord has used AiG in their lives in a special way, I thought it important to share this with you. I asked Scott to write a report for my blog:

I just wanted to share with you how important Answers in Genesis has been to me and my family, and now has become influential in our church. I know our pastor, and many others, are very grateful and appreciative of your ministry.

A personal thank you to you and Buddy and Mally and Kay and Kristel [our youngest, now 20–Ken]. You have all had a big influence on my spiritual growth, as well as my family's growth.

Influence of The Lie

I first heard of Answers in Genesis in 2001 when my wife’s sister gave me your book The Lie to read. She had seen you speak in Tennessee. I had never heard such common sense before. It was eye opening; actually, it was more heart opening.

Influence of an AiG Conference

Then I brought my family to a week long family conference at Gull Lake, Michigan, in 2002 to see you and Buddy and Carl Kerby.

The Australia Tour and Influence of Buddy Davis

. . . had Kristel writing letters back and forth with our daughter Stephanie . . .

Influence of the Creation Museum

. . . and then numerous visits to the Creation Museum. It’s all been a wonderful blessing.

Influence the Church with AiG’s VBS

Our church, Meadowbrook Baptist Church, in Lima, Ohio, will be doing our own one-week VBS on June 16–20. This year, we’re using the Answers in Genesis VBS material, Amazon Expedition. My wife, Pam, will be the teacher for all age groups, and I will be her assistant during the lessons. Many in our church are involved in the other areas of VBS as well, such as the songs, games, crafts, etc. Since the material is on the 7 C’s of History, are main theme song that we’ll sing each night is “The 7 C’s of History.” We’re doing Buddy Davis’s version of the 7 C’s song. I may be playing guitar and singing “Billions of Dead Things” also during the “Catastrophe” night, when we talk about the Flood and fossils.

On to Costa Rica

We chose to do the VBS in June this year, prior to going on our missions trip to Costa Rica. We wanted to be able to use the material and be familiar with it prior to taking the VBS material to teach in Costa Rica. Normally, our VBS is later in the summer. However, our church has organized a mission team this year. We’ve sent teams out before, usually consisting of teens, but only in the USA. This will be our first team (9 adults, 1 teen) to travel outside the USA. Our 10-person team goes to Costa Rica on July 18–28. We are going to serve with ABWE missionary to Costa Rica, Lamar Salley. Costa Rica is a Spanish-speaking nation, so communication will be a little more challenging. Fortunately, one of our team members, Carmen Ramirez, speaks Spanish. She will be helping with translation and teaching.

We have 4 main items on our agenda for Costa Rica:

It is exciting to be used by God and to see His plan unfold. Please pray that are efforts will not be in vain and that He will use our team’s efforts to draw at least one person to the saving knowledge of Jesus Christ. I received a postcard a while back from AiG that said our trip had been prayed for already in one of your prayer sessions. That is awesome to know.

I have included a photograph of Scott taken with Buddy Davis and me at the Creation Museum earlier this week. 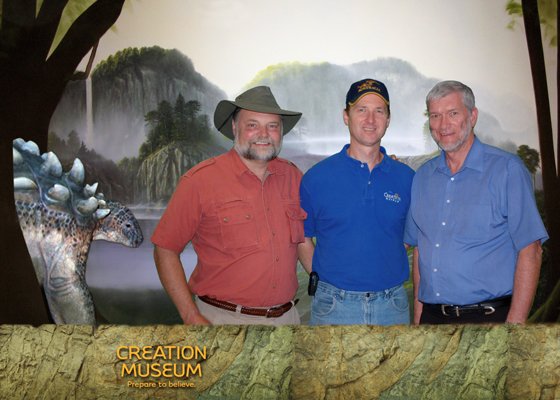 Praise the Lord for the example of how just one family, influenced by AiG, is now reaching so many others, not just in their own hometown, but now in another country. What an example for all of us.

(Isa 11:10) And in that day there shall be a root of Jesse, which shall stand for an ensign of the people; to it shall the Gentiles seek: and his rest shall be glorious.

Because of who we know Him to be, what He has done for us and can do for others we are proud to openly wear on our life collars the pennant of the Lord Jesus Christ.