It has been thrilling to see the number of requests for information about the Creation Museum from countries around the world—the word is spreading. On Tuesday I received an email from a person in Australia asking for promotional materials (I also received another email on Monday from people in Australia wanting information):

“Do you have a promotional DVD or PowerPoint that I can purchase from you or from AiG that I can share around that gives people a taste of the message of the Creation Museum… It is still my earnest desire to take some time off work and get across to visit the Museum.”

We will certainly be sending this man promotional materials so more Australians will get to hear of this phenomenal outreach of Answers in Genesis that has sparked interest in the secular and Christian world around the globe. Actually, we’ve had a few Australian visitors at the Museum this year, and I know of more coming in a couple of weeks! That’s always exciting for Mally and me as Australia is our native country, and we are still members of our church in Australia (Sunnybank Baptist church) which has us set apart as missionaries to the work of Answers in Genesis.

On Tuesday, we were blessed with a visit to the Creation Museum by the Maxwells—they are a popular homeschooling family who run a ministry called “Managers of their homes” based on the title of their most popular book. Their website can be found at www.Titus2.com. I have included a picture of them in the museum. On Tuesday night they ran a conference in Cincinnati. 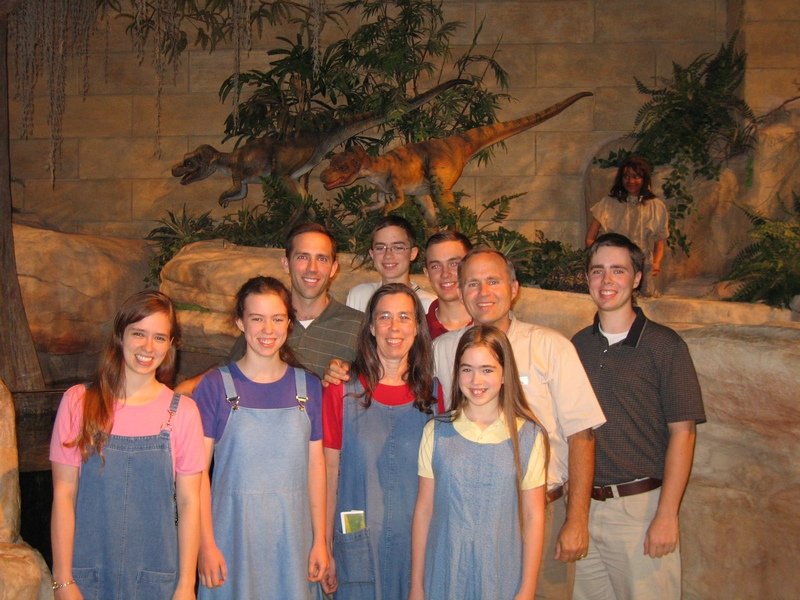 We do see many special visitors at the Creation Museum—and of course, we count everyone a special visitor. The 200,000th visitor event will happen probably sometime Thursday!!

One of the points I make in my talks is that if a person does not believe in an absolute authority, then they ultimately have no basis for right or wrong (or good or evil) etc. That is why I was interested in an article (which is really nothing new) published in the New York Times on the supposed evolution of morality. The interesting thing to me is, what this article believes is good morality, is really just the opinion of the author—after all, if there is no God who is the absolute authority, then what is supposedly “good” is just one’s subjective opinion anyway. The article begins:

“Where do moral rules come from? From reason, some philosophers say. From God, say believers. Seldom considered is a source now being advocated by some biologists, that of evolution.

“At first glance, natural selection and the survival of the fittest may seem to reward only the most selfish values. But for animals that live in groups, selfishness must be strictly curbed or there will be no advantage to social living. Could the behaviors evolved by social animals to make societies work be the foundation from which human morality evolved?” You can read the rest of the article at:

Previous Article Has the church adopted a pagan religion? Next Article Atheists with mathematics problems!